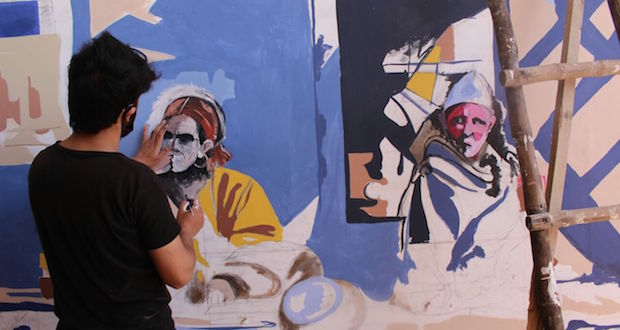 In disputed Kashmir, the government is covering up protest graffiti with cultural messages in a beautification project.Â RIFAT MOHIDIN reports.

The government in Srinagar, the summer capital of Indian-administered Kashmir, has started painting murals depicting the culture and traditions of the conflict-torn region on walls across the city to cover up angry slogans and graffiti decrying whatÂ street artists see asÂ the oppression of India in the disputed south-Asian territory.

Over the last fewÂ years, spray paint and marker pens have become the medium of choice for theÂ anonymous artists who paint the walls of Srinagar with political messages during the dead of the night and then disappear.

Many people in Kashmir see the emergence of graffiti for communicating resistanceÂ to the Indian occupationÂ as an import from Palestine. In many parts of Kashmir, particularly Srinagar, one can read messages like â€œGo India, go backâ€, â€œRevolution is Loadingâ€, and â€œPolice stateâ€ on walls and hoarding. Security agencies in Kashmir keep an eye on the unknown graffiti artists, who have put up anti-India street artÂ in many places acrossÂ the city. Earlier, a controversial piece of graffiti appeared on the walls of historic Hariparbat â€“ a hillock overlooking Srinagar, the largest city in the state of Jammu and Kashmir. â€œWelcome Taliban, Go India Go Backâ€ saidÂ the words scrawledÂ across the walls of the Fort, which is overseenÂ byÂ a Indian security camp.

But now Srinagarâ€™s local government is trying to clamp down on the dissident messaging. Their chosen method involves havingÂ young people cover up the graffitti with something a bit more palatable to the authorities â€“ murals depicting the culture and traditions of the area.

Six young artists have been hired by the Srinagar Municipal Corporation (SMC) andÂ directed to beautify the walls with the nonâ€“controversial messages. Saqib Bhat (22) and his friends Sumaira Majeed (22), Maria Shamiri (22), Zaid Bhat (21) and Suhail Sofi (21), who work together on each of the state-sanctioned murals, are all students of Â the Fine Art School in Kashmir.

The groupÂ say they have nothing controversial to write andÂ just want to use theÂ opportunity to showcase their talent. â€œIt is aimed at beautification and the walls are the canvas, and we are giving our best to make the best murals. People appreciate us for the paintings. They come to see this different concept. Even artists visit us,â€ said Shamiri.

SMCÂ commissioner Tufail Mattoo, who started the project, said the aim was to give the current generation an insight into Kashmir’s past.

â€œThis is just to beautify Srinagar, so that the youngsters as well as tourists who come here from different countries can get an insight about the culture and history of this place through art,â€ heÂ said.

Some see nothing sinister in the project and believe it is merely aÂ way forÂ government to engage and employ young peopleÂ while at the same time giving the official brush-off to the city’s graffiti artists andÂ theirÂ anti-Indian messages. But for othersÂ the mural painting project is nothing more than colorful censorship.