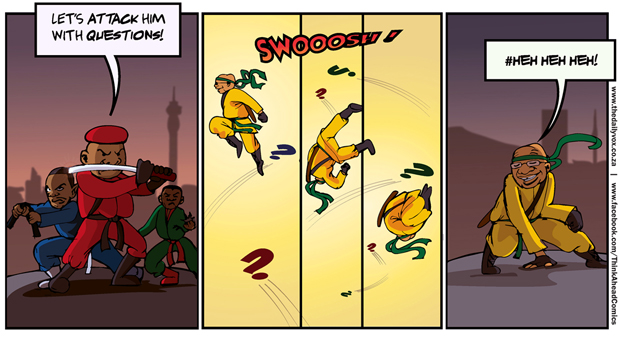 The Daily Vox asked students and political experts what they thought the repercussions of the State of Capture Report would be – and whether they felt President Zuma would be removed, or step down, anytime soon.

[dropcap]â€œ[/dropcap]It looks as if the tide inside the ANC is turning, which is why someone like Jackson Mthembu was emboldened to speak out two weeks ago, but I donâ€™t think itâ€™s turned strongly enough to ensure the opening of serious discussion about whether Zuma should go – or for calling an early [ANC National Executive] conference, or mobilising the branches. I think that those who want change are mobilising for the change in the long view – which means that they are prepared to wait until the Conference next year, at which point, inevitably, it looks like he will need to go.

Maybe Iâ€™m wrong, but it looks like the level of impunity and the level of arrogance is so high that they are even prepared to dismiss, rubbish and ignore the ANC veterans who have been displaying concerns over Zumaâ€™s conduct. Because look what Kebby Maphatsoe said today, that the ANC veterans are empty tins, empty vessels just making noise. So the factional fight for change within the ANC will continue. Momentum will build, thereâ€™ll be more movements, more people speaking out – but, no, I donâ€™t think theyâ€™re going to remove him anytime soon.”

Sithembile Mbete, political analyst and lecturer at the University of Pretoria

[dropcap]â€œ[/dropcap]So the ANC is hugely divided, thereâ€™s the pro-Zuma faction, thereâ€™s the anti-Zuma faction – but thereâ€™s also, I think a great deal of disagreement, both within the pro-Zuma faction and within the anti-Zuma faction, about how to handle the situation. Itâ€™s unclear, really, who is going to prevail. Youâ€™ll remember that with Thabo Mbeki the ANC National Executive Committee (NEC) and leadership basically voted to recall him as president – but thereâ€™s nothing within ANC law that says that you can recall a president. So what they did is that they said they donâ€™t support him as the President of the Republic anymore and recommended that, on his own conscience, he should resign – which he did. So if you wanted Zuma to step down through an [internal] ANC process, you would need to follow the same process. Now I donâ€™t know whether thereâ€™s enough consensus within the ANC NEC to be able to make that kind of request firstly, but secondly it seems that even if that kind of request was made, Zuma has no intention of resigning.

The other possible option is for a vote of no confidence to be passed within Parliament, as has been approved for debate in Parliament next week. The thing thatâ€™s always stopped votes of no confidence before has been the ANC could using its numbers [in Parliament] to refuse, and also that the Speaker has always refused to include it on the agenda. At this point we just donâ€™t know [whether enough ANC MPs want Zuma removed]. What we do see is that Jackson Mthembu as Chief Whip has been getting away with all of the things that heâ€™s been saying about the president, which indicates that there must be some support for him – but we donâ€™t know if it’s nearly half of the [ANC] caucus that would vote for the president to be removed. The other thing is that this sort of vote would only be successful if it was a secret ballot. It would not be successful if it was an open ballot because the ANC doesnâ€™t work like that – that people will openly vote against him.â€

[dropcap]â€œ[/dropcap]I donâ€™t believe that thereâ€™ll be justice after the release of the State Capture Report – Zumaâ€™s going to get away with it. It was a waste of time taking people to Pretoria to go on protest. I feel like if people donâ€™t wake up then nothing will happen. People know whatâ€™s happening but theyâ€™re too stupid to say anything. You know, as a movement we could shut down Africa, you understand? We donâ€™t need this person to rule over us as president. We can say that this is wrong, that we donâ€™t accept this. The corruption must stop at some point. And we, the youth, weâ€™re evolving and are going to change it – whether they like it or not. I see the Guptas as investors, so they will never be touched. Yes, they might have some words for them, â€œyes the Guptas are in troubleâ€ – but thatâ€™s where itâ€™s going to end. If I gave you a certain amount of money and said, â€œListen, I want this report goneâ€, and youâ€™ve never had this amount of money in your life – youâ€™re going to take it, whether youâ€™re a good person or not. Money is the root of all evil. No one is going to get justice – as long as youâ€™ve got the money and power, youâ€™re safe and can do whatever you want.â€

[dropcap]â€œ[/dropcap]The alleged charges against Zuma and the Guptas, in my opinion, are true because thereâ€™s an element of truth in all stories even if we donâ€™t know both sides of the story. But in general I think it needs to be released so we know whatâ€™s going on. Personally I donâ€™t think Zuma will be willing to leave, but I think he definitely should leave because of so many other things that heâ€™s done wrong – for example, the issue of Nkandla. If he is found guilty then lawfully he should leave.â€

Editor’s note: Our original post included an image that set out the voting breakdown in Parliament in terms of section 89 of the Constitution. Section 89 deals with the removal of the president (impeachment), whereas section 102 deals with motions of no confidence. The image has been updated.