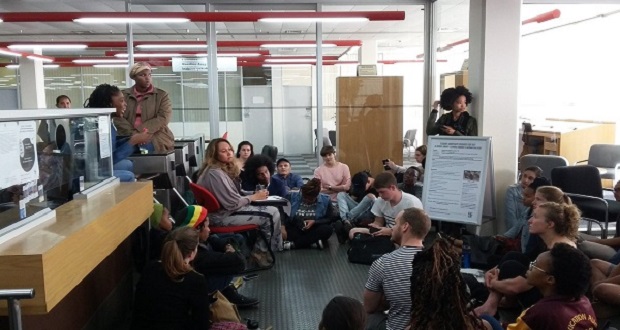 Students at Stellenbosch University have been staging sit-ins at the J.S. Gericke library since Monday under the banners of #Occupy4FreeEducation and #SFMFDefianceCampaign. The Daily Vox spoke to one of the occupiers, Simone Cupido, to find out exactly what is going on there.

So we had organised a sit-in the night before [Monday] and last night [Tuesday]. It was basically a tactic of: the library closes at 10 o’clock every night, and the agreement was that they were going to stay overnight for the two nights as a form of nonviolent protest. And then last night, the university deployed private security and kind of boxed students in with the private security. But that was fine. The students stayed in and there was no violence in that respect. And then this morning when the students were about to leave, the security didnâ€™t want them to leave and so the students decided to shut down the library by just not leaving. So weâ€™re a few hours into them not allowing us to leave and the library is not operational.

#SFMFDefiance The current scene in the front of the library pic.twitter.com/b7Br8acz1w

Our movement has never ever acted in violence. Even the sit-in itself was a very nonviolent protest so itâ€™s really going to depend on what happens with the security because I know that when violence is enacted upon our students, it gets responded to with violence.

They sent us the Dean of Students. We just want to talk @StellenboschUni #SFMFDefianceCampaign pic.twitter.com/rfeShLJVMW

To break the libraryâ€™s curfew was an act of defiance. That was to try and get a point of interaction with the vice-chancellor, Wim de Villiers, because of the fact that he has been having these private meetings to talk about fees, and then in the media heâ€™s widely speaking about how he consulted with students and key members of the Fees Must Fall movement and that his deductions from those meetings was that free education is impossible. So for us, we think itâ€™s very arrogant to misquote or to misunderstand the sentiments of the students because we were very clear from the very beginning and we believe in free education. And the issue is no longer fighting the university, the issue has now become getting the university behind us to fight nationally for free education. It really makes it difficult when de Villiers stands as the only divergent voice at the Fees Commission saying that free education is impossible. We have been very clear that we, students are for free education.

Our demands specifically [with regard to occupying the library] is for a meeting with Wim de Villiers. The students are not going to leave until Wim de Villiers comes to speak to us. The problem is that he is always out of town, he is never here. Every interaction weâ€™ve ever had with him has been in a long email or via video. Itâ€™s not in good faith to say that you have an interaction of engagement but youâ€™ve consistently just not been around. And so weâ€™re asking where he is and weâ€™re saying that we donâ€™t really care that heâ€™s in George. He should be here with the students, especially at this time. Wim de Villiers has not publicly spoken to us. There have been meetings in boardrooms with certain people but it hasnâ€™t been open meetings, itâ€™s been invitation-only meetings. And that doesnâ€™t really capture us. He hasnâ€™t really spoken to the university, the most I think has been in presentations, these very small presentations. I think the rules of engagement are very clear when it comes to students. We said many a time that he needs to engage with us in an open way, whether itâ€™s on the Rooiplein [open area between university buildings] or you need to engage with us in public. Because the act of engaging with us in closed, confined spaces is violent.

Collective remains put. They will not leave until Prof. Wim de Villiers addresses them. #SULibSitIn #SFMFDefianceCampaign

Weâ€™re going to occupy until Wim de Villiers comes to speak in the library. I donâ€™t know about the logistics, I mean I donâ€™t really care about the logistics personally. But the idea is just that we are going to speak to him and going to have an articulate conversation and make it very clear that we are for free education and that he needs to stop speaking to the public saying that weâ€™re not, as a campus. We want the universityâ€™s support. Thatâ€™s the idea.

Question of the day: Will the rector go the the library to try and resolve issues? #SFMFDefianceCampaign