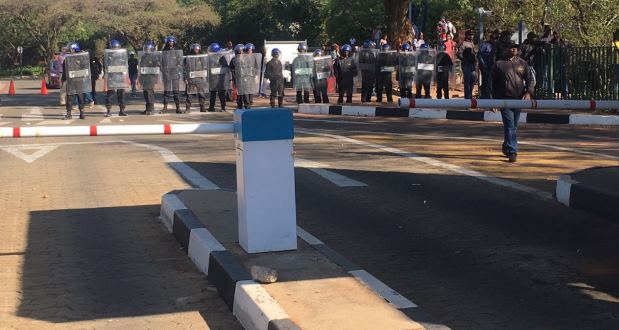 Students faced off against private security at the University of Johannesburg (UJ) Kingsway, Bunting Road and Doornfontein campuses in Auckland Park on Wednesday.

The worst of the clashes occurred outside the Doornfontein campus, where they were met by private security who started hurling rocks at them and attacking students. Fights broke out between police and private security, and journalists and students were pepper sprayed.

Private security seemed to target journalists especially for recording them.

Fidelity private security sat reporters down knowing who they were. Made them kneel, hit them with batons across the face for taking pics.

They attacked us. Private security attacked journalists who identified themselves as media. Told us to sit down and pepper sprayed #UJ

Earlier, George Kiblor, a student activist at the Kingsway campus said private security dispersed a group of students who had assembled from a public gathering space where the SRC usually addresses students.

â€œThey used pepper spray on us without informing anyone. Even the lecturers who were standing in solidarity with us have been pepper sprayed, beaten and assaulted,â€ he said.

A man has just been pepper sprayed. Students shout at security: “we’re my even doing anything” #UJ #Fees2017 pic.twitter.com/McL12rjhun

According to Kiblor, some twenty students had been injured.

Protests at UJ began on Monday, following the re-emergence of the Fees Must Fall movement across university campuses around the country. However, the university has maintained that academic activities would continue, and reminded students that gatherings could not be planned without prior permission.

Robyn Cook, a graphic design lecturer at UJ’s Bunting Road Campus said a small group of students was prevented from entering the university on Wednesday morning.

â€œThey wouldn’t let them into campus. The Fidelity security guards were walking around indiscriminately pepper spraying anybody and everybody. Iâ€™ve got pepper spray all over me. The students remained calm and peaceful despite the ongoing provocation,â€ she said.

According to Cook, protesters then reassembled at the student centre.

â€œWe weren’t disrupting anyone or anything. A group of us were sitting there, very quiet, very relaxed. We were going to start to talking to each other. The security asked them asked if they could have a private word with the leaders first, and tried their utmost to separate them from the crowd,” said Cook.

â€œThe next minute they were all thrown into the back of a police van. Some of them managed to get away because they literally ran,â€ said Cook.

Zwakhele Mahlangu, a student activist at the Kingsway campus, alleged that private security had beaten students and thrown rocks at them.

â€œThe bouncers were unprovoked when they returned and continued beating up on students again and chasing them out of the school. The students were frustrated and started banging against the gate and throwing stones at the bouncers because they have been beaten up so many times without retaliating,â€ he said.

One of our colleagues was pepper sprayed in the face and is severely injured. The amount of pepper spray flying around is incredibly dangerous,â€ she said.

â€œIâ€™m so sick of media reporting that the students are being provocative when in fact the opposite is true. How the students maintain calm and discipline given the ongoing provocation they are faced with is incredible to see.â€

â€œOnly six students remain at the police station. They are currently being warned by the station commander before being sent back to join the other students,â€ the police officer said.

When The Daily Vox reporter Mohammed Jameel Abdulla arrived on the scene after the clashes, things were calm. â€œThe scene was still very tense with police pursuing random protesters up Kingsway road. Students escaped via the park across from the university entrance. Many others were congregated around the university gate and watching from the bridge leading to the parking lot.â€ Police had left by that time. However, at around 3pm, students from the Bunting Road campus arrived at the Kingsway campus and blocked the road in front of the Kingsway campus entrance. Police returned and warned them to move onto the sidewalk, where they remained for a few minutes before heading to the now-closed entrance to the Kingsway campus. There, they were met by private security in riot gear who guarded the locked gates as students sang outside.

Students began throwing rocks but were calmed by student leaders and continued singing outside the gates.

#UJ not attacking gate as before. Simply singing in defiance against private security. Police watching on standby pic.twitter.com/X47UVZAvtE

Students made their way to Wits University in Braamfontein, where they collected comrades from Wits and continued marching to UJ’s Doornfontein campus.

Repeated attempts to reach the University of Johannesburg for comment during the day were not successful. It has been reported however, that UJ plans to host a press conference to address the events of Wednesday.

#Fees2017 #UJ says it will hold a press conference to respond to private security attacking students and media. Condemn attacks on media

Editor’s note: The quotes of Robyn Cook have been edited for clarity.Â