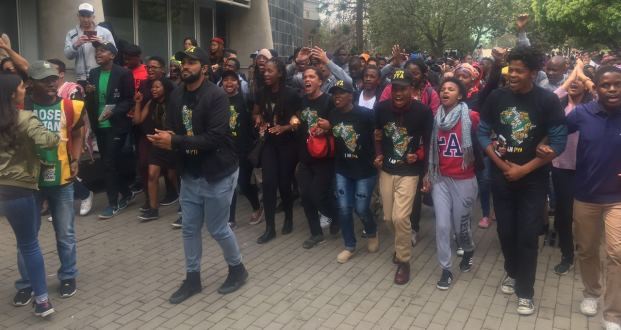 Protests have erupted at three university campuses following an announcement by Higher Education Minister Blade Nzimande on Monday on adjustments to the fee structures at our institutions of higher learning.

Students have mobilised for a shutdown of the institution, but not without some drama in between.

This is how it began:

Students congregated at the mass meeting in Solomon Mahlangu HouseÂ organised by the incumbent SRC, made up of the ANC-aligned Progressive Youth Alliance (PYA).

Following this, students began marching around the university disrupting the university’s various spaces and collecting students. SRC leaders co ordinating the march claimed that the causes involved everyone and that they would not allow spectators.

Students moved from the engineering building and then to Solomon Mahlangu House to plan a way forward for a shutdowns, that would start from Tuesday.

However, upon returning to Solomon House, private security were blocking all entrances – due to a still live interdict banning students from occupying the building. The SRC announced that they would enter the building and push through – but were not successful in this. It was highlighted that the protests must be kept peaceful.

Thereafter, masses were encouraged to commence the shutdown for the day and split up into various smaller groupings. Many went to different entrances to block cars from entering and leaving, while others proceeded to disrupt lectures, tutorials and tests that were taking place.

This continued until 5pm when students were called to congregate for a mass meeting, to be held at Solomon House Concourse. There were some confrontations with private security, particularly a violent one at the Enoch Sontonga entrance, and some incidents of students throwing around desks and chairs while disrupting academic activity – but overall the protest was predominantly peaceful and students were cooperative in leaving classes.

This must not become PYA vs EFF. Students must guard against that, it will kill the movement.

That yes, and personal issues that people have. Politics of ego loom large in the student movement. https://t.co/AkXqhyk1Nq

Tensions escalated later as students moved to block the entrances of the university and private security tried to stop them by pushing some of them back.

The announcement has been met with skepticism from the students at Stellenbosch.

Simone Cupido, a student activist at Stellenbosch University, accused Nzimande of passing the buck back to universities while â€œactually supporting a fee incrementâ€.

â€œI think people are in shock that it went this way and we definitely know that our university will increase by 8%,â€ Cupido said, adding â€œThe consensus is however, that we would need to see what the universitiesâ€™ reaction is and our demands still stand.â€

There are no moves being made to shut down Stellenbosch University as yet.

The EFF Student Council at the University of Pretoria attempted to coordinate a shutdown today but was unsuccessful.

â€œThere were those that tried to shut down our campus from the EFF side. Some of their numbers were not even students, so it was a poor attempt. I donâ€™t see a second attempt coming tomorrow [Tuesday],â€ said a former SRC member who wishes to remain anonymous.

The student said that a shutdown is not necessarily on the cards for UP. â€œOther than that, the student body is not for a shutdown. In actual fact, it makes better sense to receive official confirmation from the university as to what percentage they are choosing because we believe 8% to be a cap.â€

â€œI think we are going in to SRC elections tomorrow [Tuesday], so on our minds was a presidential circus today and not necessarily the statement via the minister.â€

UCT held a mass meeting on Monday with an agenda to discuss free, decolonised education, outsourcing, and the expulsion of students among other things. Classes had already been suspended on Monday following protests last week.

At the meeting, the UCT SRC rejected Nzimandeâ€™s 8% cap on the fee increases for 2017.

The UCT SRC have compiled a list of demands which include: removal of statues and plaques commemorating white supremacists around the campus and a R12, 000 salary for UCT workers who must be insourced.

The Daily Vox spoke to Chumani Maxwele, #RhodesMustFall activist who said, â€œThe students are rejecting this on the basis of the ANCâ€™s policy. The ANC took a resolution as part of its resolution in the National Congress where it says free education. Now this is not just students thumbsucking the call for free education. It was pronounced by the ANC in its National Congress as a resolution. Now the Minister Blade Nzimande is deployed by the ANC to go and implement the resolution of the government.

The ANC does not do its work of implementing its own policies. You will remember recently that the ANC pronounced that the fees must be kept as they are at the recent ANC National Executive Committee. And for us, we are not just going to be reactionary in what Minister Blade is saying.â€

According to Maxwele, the shutdown will continue.

â€œAt UCT, the university is already shut now. It’s not operating. Now we are clear about our position, the university will be shut for the next few weeks up until free education is declared and the university brings back all those who are suspended, interdicted and expelled,â€ he said.

There were also reports of UFS students mobilising others to leave class and join the protests in an attempt to coordinate a shutdown.

UFS – “Some of us are going to the medical facility and some of us to the main gate (to shut the campus down).” #FeesMustFall2016