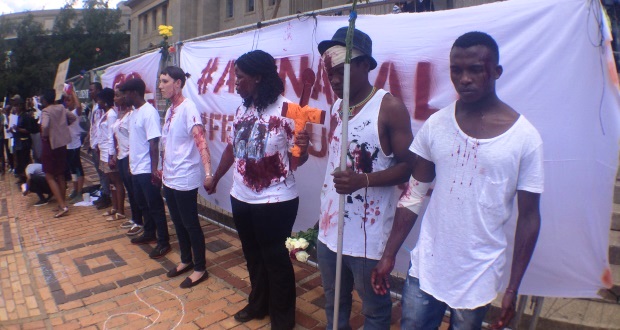 Staff, workers and students held a protest at Wits on Wednesday to contest the presence of private security forces on the campus. DANA DA SILVA spoke to some protesters about the private security on campus. Julian Brown, politics lecturer
The students and the workers have a vital role to play in making this university a community in which we can all live and which we can all engage. Their struggles are not necessarily directly my struggles, but Iâ€™m here in support and in solidarity with them. Itâ€™s overkill [private security], certainly on the evidence of this protest here today. I canâ€™t speak for every protest, every time, or at any point in the future; but this protest here today is peaceful, it is calm and it is dignified. The presence of private security officers with riot shields seems excessive and sets the wrong tone for the university. Phyllia Ngoarje, law student
The protest is about the militarisation of campus right now. Personally, because I am a member of Fees Must Fall, I feel quite unsafe and not being able to move around my campus freely is just unsettling. I canâ€™t even get into the administration block without someone following me and asking me ten billion questions. Itâ€™s very uncomfortable; it feels like the university is sort of attacking those who are protesting and keeping them at bay by presenting this violent figure so that we must fear the place where we get educated. Brendan Booysen, student
Itâ€™s very negative having them [private security] especially if you enter a building and theyâ€™re going to say, donâ€™t anything, youâ€™re being watched. That doesnâ€™t really make me feel safe that every second Iâ€™m going to be watched by a bunch of people with riot gear and any type of weaponry. For example, I came to pay my fees and when entering they said that I would have been watched inside as I walked the corridors. Theyâ€™ve been acting a lot more paranoid and aggravated, just [by us] going anywhere near the Great Hall. Sona Mahendra, student
I feel better with campus security, because after all they are here for students. Whereas with private security I donâ€™t know if I can trust them, I donâ€™t know what I can do wrong for them to come and do something against me. I do feel a bit uneasy with them being there, especially because they have such heavy riot gear. The question in my head is, for what? So it makes me nervous to put the wrong foot out or anything. It is not a clear cut idea of what they are here for. Claire Rousell, lecturer
Iâ€™m very taken aback and Iâ€™m very angry, very emotional actually about it. It looks very much like apartheid and thatâ€™s very worrying. Iâ€™m worried that a public institution is bringing in private security and replicating the excessive use of private security that happens all over the country. But also in response to protests, I think this is really an excellent opportunity for us to really sit down as staff, students, senior management and really get to the bottom of these things, even if theyâ€™re painful and hard and seem impossible. This feels like a shutdown, like weâ€™re not going to talk about it and I think that it does incite violence, anger, frustration and aggression. That worries me deeply. I think itâ€™s unnecessary considering the amount of students versus the amount of security officials here. Itâ€™s intimidating, it makes the space not feel safe enough for us to come and enter it. I mean just getting into the campus and trying to sort things out like fees is a mission.

For more responses to the Wits Vice Chancellor Adam Habib’s decision to bring private security on the campus, read this and this.Â