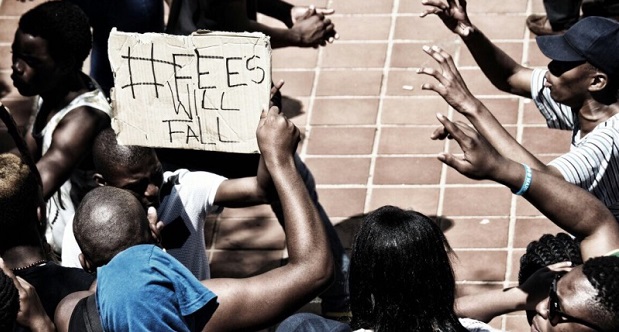 Students around the country have taken to campuses and the streets to call for free education. However, student groups at different universitiesÂ are not united in their demands. The Daily Vox looks at some of the (many) demands being made on campuses and the responses to their demands from university management and government.

University of the Witwatersrand (Wits)

Students at Wits have approached different stakeholders with a various demands.

On 23 September, students demanded that if Cosatu were committed to supporting the working class of South Africans, they should support the students. Cosatu representatives pledged their support for the students provided the students remained peaceful.

Students marched to the Chamber of Mines on 28 September, calling for the institution to invest in a new social compact and recognise the important role universities play in reducing poverty and inequality. Representatives from the Chamber said they would reply to the students within two weeks. Student leader Mcebo Dlamini saidÂ the recommendation for an 8% cap on increases shows government has not taken student demands seriously as students had last year asked for a moratorium on fee increases until free education would be realised.

Wits management responded to the students’ demands for the removal of police and private security by saying they would remove the private security if student leaders guaranteed that the academic programme could continue without disruption, that there would be no violence or threat to students and staff, and that there would be no destruction of property. The university has also said that students who broke the rules would be held accountable.

The university said it supports the call for free education and is committed to working towards this goal with all the stakeholders involved.

A general assembly which was to be held at Wits University on 7 October was meant to solidify the universityâ€™s position on the call for free education. However, management postponed the assembly owing to a lack of consensus between students and management regarding the opening of the campus on 10 October.

WitsÂ reopened on 10 October, amid heavy police presence and there have been numerous clashes between protesters and police.

Students and academics at UJ have asked management to engage with them in a peaceful way and to bring an end to the intimidation by police and private security seen in September. The University of Pretoria is one of the only universities where management agreed to and promised to implement studentsâ€™ demands. Students at UCT have demanded that the university bring back the students that were expelled and suspended during last yearâ€™s protests (#BringBackOurCadres).

The university shut down on Wednesday, 5 October after students disrupted classes. In a statement, management said it was engaging with students. UCT management has not yet reached a resolution regarding the students’ call for free, decolonised education. It has however said that the request for the university to be closed down until it engages with students on the matter is unreasonable. Management says its main concern is to ensure that classes go on uninterrupted, but it has kept the campus shut.

Students at CPUT have gone to court seeking an interdict to prohibit police from removing demonstrators from campus.

Management was presented with the demands on 30 September and were given 48 hours to respond. Students say the vice chancellor has not yet responded and that he is wasting their time. University of the Western Cape (UWC)

Management at UWC has said it is willing to engage with students on their demands and has sent an open invitation to student leaders to participate in a multi-stakeholder engagement. Management at NMMU says it has received four different sets of demands from student groups and it would take a while to respond to all of them. The university first responded by saying it supports the call to widen access to higher education from academically deserving poor and missing middle students. Students were not happy with the response and are continuing with protests. Students gave management until 26 September to respond to demands. Management has asked for some time to consider the demands and has asked government to provide a platform for engagement for universities to resolve the problem.

University management said in a statement that it had reached an agreement with students to resume classes on Wednesday, 5 October. However, just hours after confirming this, the deputy vice chancellorâ€™s office and a car were set on fire on Wednesday morning. Students have accused the vice chancellor of UKZN of racism and of not having their interests at heart.

Memorandum outlining the demands for the #feesmustfall movement at #ukzn Howard pic.twitter.com/LUdyXuGjLM

The studentsâ€™ list of demands was handed over to management during a council meeting. However, the council has not responded to the demands.

Students from UKZN and DUT also marched to City Hall on Tuesday where they handed over a memorandum to a representative of the mayor’s office. Sasco have a list of 10 demands for government and university management. They say that all they have received from the government is “a lousy task team“, which they plan to address in a letter to the president. And what about government?

Blade Nzimande
The minister of higher education, who made the announcement that kicked off #FeesMustFall2016,Â said that his department will support universities if they shut down campuses and residences to protect the university from violent minorities. In Â press conference, he reiterated his department’s position that students who can afford to pay fees must pay, and that students who are violent or act illegally “must be dealt with”.

He also said that the legitimate demands of the students have been overtaken by a third force seeking to destabilise the education system.

Gwede Mantashe
The ANC secretary general has said that if he were the minister of higher education he would close universities for six months to show students how to appreciate higher education. Mantashe has also said the Freedom Charter does not promise free education but rather stated that scholarships for higher education and technical education will be granted on the basis of merit.

Pravin Gordhan
Finance minister Pravin Gordhan, who was recently summoned to appear before court on fraud charges, has said that he supports the call of free education. However he believesÂ that those families who have an income and can afford to pay for university fees should pay. â€œThose who can afford to borrow money from a bank and repay the money once they find a job should do so as well. So I think we require a collaborative effort from all concerned,” he said.

David Mahlobo
The department of state security, under the directive of minister David Mahlobo, has taken a zero tolerance stance towards protesters, saying that students will face the full might of the law if they are found to be involved in violence.

Thabo Mbeki
Former president Thabo Mbeki has said that even though South Africa needs an educated population, the countryâ€™s budget cannot only be allocated to higher education giving the various needs which the country, has such a public healthcare and so forth.

â€œIt is a collective good for the country, so itâ€™s not something I can fight about. Where it becomes problematic is who pays,â€ he said.

Buti Manamela
The deputy minister of the Department of Planning, Monitoring and Evaluation has said that fees should fall for working class children and that universities should not fail in striving for free education. He has also said that criminals who burn things on campuses must be isolated.

On Tuesday, President Jacob Zuma announced the creation of a task team to â€œnormalise the situation at higher education institutionsâ€. Notably, the task team does not include Gordhan, but does include the entire security cluster.