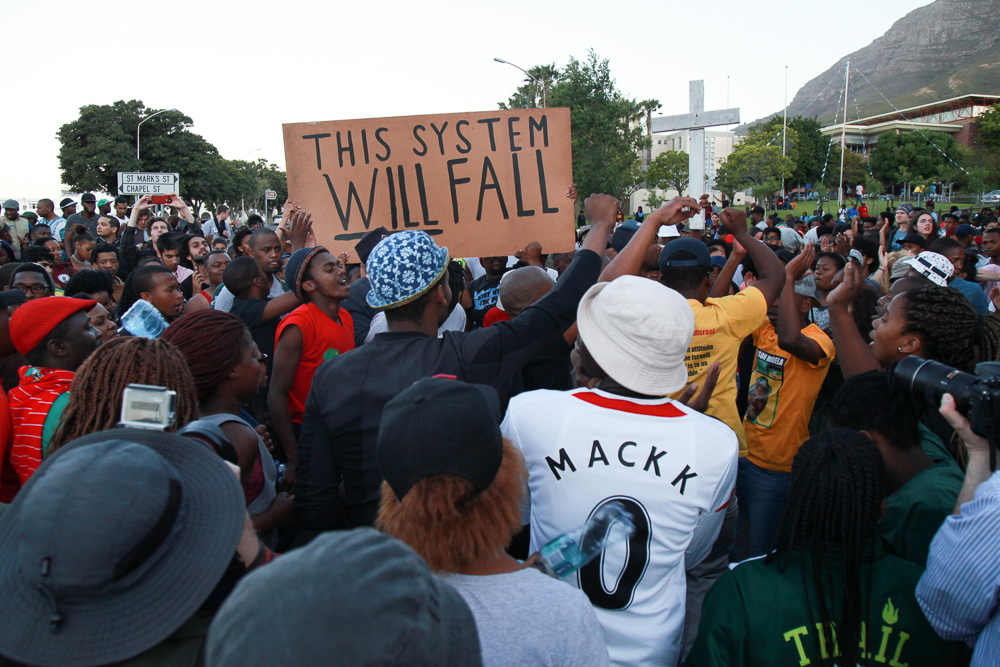 President Jacob Zuma announced a freeze on fee increases at South African higher education institutions on Friday. And as student movements across the country mull their next step, AAISHA DADI PATEL spoke to Witsies about how they feel about the protest, and government’s commitment to no fee increase for the 2016 academic year.Â Navalin Govender, 25, Mechanical Engineer
The protest I fully agreed with – it’s definitely something I can relate to, given the background that I come from. It’s a small victory in the greater scheme of things. This needs to lead to a complete rehaul of the economic system in this country because a minority controls majority of the wealth. The reason we don’t understand white privilege, I’m sorry to say, is because white people lack an understanding of the ramifications of their actions on black people, and poorer classes, and until they understand that, we won’t get anything right . Whites need to accept white privilege – the protest is a small battle in a big war that needs to be fought.

Siphelele, 33, Wits alumni
I think it’s been a long time coming, in its own way it’s something unique and comes at the heels of something Witsies and all students have been battling with for decades. This is the first time students were able to push past things that stopped them before, and this is part of a long struggle that’s been able to be pushed forward. In our times we see disparities between privileged and non privileged students – and this time we had a situation where everyone was there and there was an understanding of fundamental points. And even though it happened just before exam time, it was still able to happen. The paradigm has shifted. These students were much more brave than we could have been in our time, ten years or so ago. Mothusi Mothopeng, 23, BHSc student
I didn’t think the protestÂ would get this far. I said that I would support it from the start because this is an issue that affects me. When people around the country started joining, that’s when I realized it was something big. I was blocking booms last week, I was sleeping and studying at Wits in the week, and I was there today. I wanted to leave when I saw how violent and dangerous it was – and then I saw on Twitter that we got a 0% increase, and I thought that was really good. At the same time though, Zuma didn’t address everything. He didn’t talk about issues of outsourcing or free education, and his suggestion of a task team is not something concrete. What was really sad was that when we were meant to be celebrating, TUT students ruined it for us. The bus I was in was threatened to be set on fire – we thought it was just being dramatic, until a TUT student came onto our bus with a lit up branch and we realized how serious it was and we had to get off. Eventually the cops came around and earth with the situation but it was crazy.Â The cops showed a lot of restraint at the Union Buildings, considering what was going on. I didn’t like the slow response to us leaving though.Â But what this whole thing does is show the power of the youth and how much we can get done as students. It also shows how management doesn’t care about us – why did it have to go this far?

Cuan Humphries, 22, Media Studies Honours Student
I’m incredibly proud to be both a Wits student and a member of the wider South African student body. I feel that the protests were necessary and that they have been the first step to ensuring that the ideals of free education for all, regardless of circumstance, are realised within our lifetime. I also believe that history has been made and that I’ve walked away from it feeling like being a student in an institution of higher education has really meant something for the first time. Although I was personally involved in situations which turned violent and should not be condoned, the protests were predominantly peaceful and all the more meaningful because of it. Never again will I forget that education is the only weapon we have and that all South African citizens should be able to utilise it.