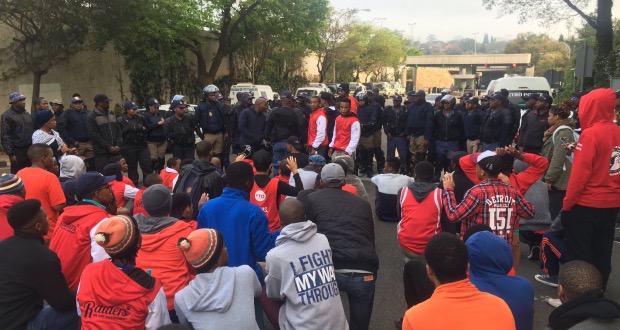 Day two of protests againstÂ the proposed fee hikes turned violent at the University of WitwatersrandÂ after students were refusedÂ access to Solomon Mahlangu House.

In an email sent out to all students on Monday night, university management saidÂ that protesting students were only permitted access to Solomon Mahlangu House between 5pm and 10pm. Students however sought to convene a meeting there after shutting down the medical school campus in Parktown. After attempting to pull any remaining students out of classes, they marched up to gain entry to Solomon House via Great Hall, and this was where chaos broke out.

Private security refused entry to the students. Rubbish bins were reportedly then broken, and remnants of the binsÂ were hurled at the security forces, who retaliated with rocks and stones of their own. Members of the SAPS managed to calm the situation, and once the students surrendered, they managed to break the doors at Great Hall to gain entry into Solomon House.

This is Wits student, Khaliel Moses’ account of what happened:

[dropcap]”[/dropcap]So the private security made a formation along the pillars and we came up the steps and we asked them to move. They didn’t want to move so we started pushing. And there were lots of people andÂ we just pushed back. We were aboutÂ 500. It was big group.

“I saw a black woman rushing out of the crowd with her head bleeding. and apparently +13 people were injured in the falling down of the stairs. It was dope. We broke those stone bins. we kept banging them against the ground and we broke them and picked up the stones and started throwing stones. and it got really hectic when they started throwing back. and they were aiming. You could see, they would watch and see who was throwing the stones and then walk down the steps and then aim at them. so a lot of people got injured in that. and then it went on like that for awhile. we throwing stones and them throwing stones back. we used fire extinguishers on them and whatever. then i heard media chatter about a congregation on about 800+ police headed this way to Wits campus to sort the rebel out.

[SRC member] Fasiha Hassen and a couple of the other comrades managed to calm the situation down. Then police arrived and they spoke to the private security and we just kneeled in front here along the ground, with ourÂ hands up to stop them throwing stones. once they stopped, we spoke to the police. The police then made a line in front of the doors because the private security went inside. Then we pushed past the police and went inside.”

A number of Wits students who hadÂ beenÂ detainedÂ atÂ the Hillbrow Police Station early on Tuesday morning were also released late in the afternoon.

LATEST UPDATE FROM WITS: A number of protesting students at Wits have been arrested. Our reporter @indie_impimpi is amongst those. pic.twitter.com/F4uD9D3xQK

Right before they jumped us & arrested many of us. They took students on the ground protesting peacefully #Fees2017 pic.twitter.com/TQqx6hVARS

These acts of protestÂ follow MinisterÂ Blade Nzimande’s announcement of a proposed 8% increase in fees.

Students were gathered at the Empire Road entrance of Wits, where there was a heavy police and private security presence. Police grabbed students en masse, and pushed them into vans to be taken back to Hillbrow Police Station.

Sound familiar to anyone? https://t.co/ZZ6qiOQJHs

The Daily Vox reporter, Mohammed Jameel Abdulla was reporting at the scene, and was also amongst one batch of arrested students, though he was later released. “There were about fourteen of us packed into a van. Police say the arrests were because of contravening an interdict. Students complained about not being able to breathe, and the police sergeant said that if people are not breathing he considers it a win on their part.”

First hand account from one of the arrested protesters at Wits #Fees2017 pic.twitter.com/vAiJaGiHvx

The students are now awaiting legal representation. A statement released on Monday night by the university has said that there will be “business as usual,” and “heightened security measures to ensure the safety and protection of all.”

Buhle Zuma, a spokesperson from Wits University, told The DailyÂ Vox that students had opened fire extinguishers in lecture halls, intimidated other students with sticks and threatened staff and students to leave lectures. Zuma acknowledged the right of students to protest but said thatÂ “students must follow the Universityâ€™s rules and respect the Constitution of our country.”

She also confirmed that the university’s Council is meeting on 30 September to discuss Nzimande’s recommendations.