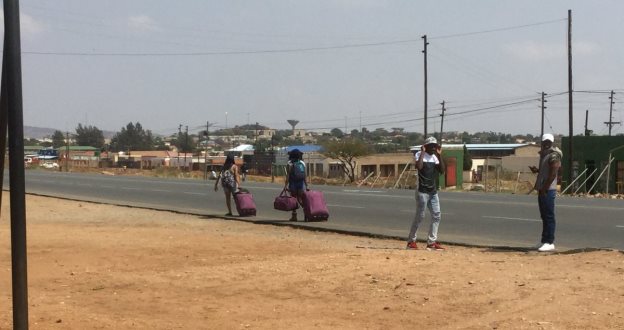 On Wednesday, activities at the University of Limpopo were suspended indefinitely and students living in the residences of the Turfloop campus were ordered to vacate their rooms by 5pm.

Students were stranded with no place to go as some live as far as the Eastern Cape with no funds to travel home.

Barry Ngwenya, Regional Chairperson of Sasco, told the Daily Vox that they were not prepared and the university did not give students enough time to evacuate campus.

â€œThere are many students who are affected by this thing. We are trying to accommodate those students who were unable to go home. Bear in mind that students had just arrived from home, some came from the Eastern Cape, Mpumalanga, Gauteng and the North West. We have now turned to the churches and the Municipality Hall. Some students were squatting in their friendsâ€™ room but now they are dispossessed and we can only assist some of them,â€ says Ngenya.

#ULshutdown Students are appealing for support from “anybody with a heart” to assist them with food or money to return to their homes.

There is a heavy police presence on Thursday morning as the University of Limpopo remains shut down indefinitely.

The three students who had been arrested on TuesdayÂ appeared in court on Wednesday afternoon according to Brigadier Mojapela from the Limpopo SAPS. They were released as there was insufficient evidence to charge them.