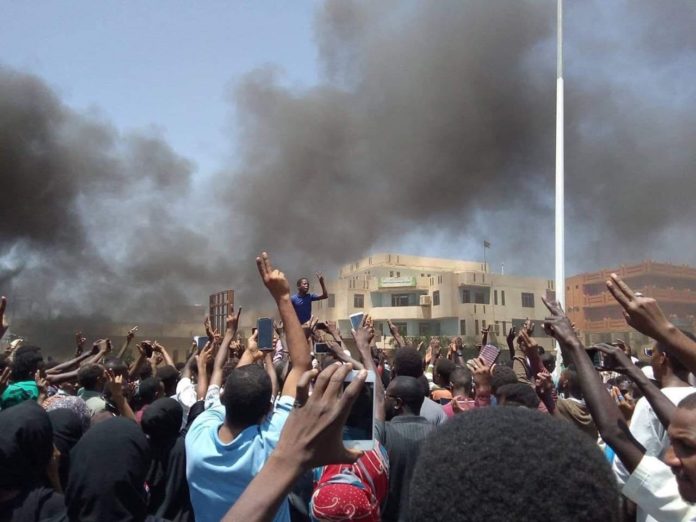 A suspension of Sudan’s African Union (AU) membership. This comes after the extreme violence meted out by the transitional military council on protestors at a sit-in. For the past two weeks, the military have been attacking and killing protestors. Khartoum, the capital has been on lockdown and the internet has been shut down.

Hundreds of people have been killed in the crackdown. The Central Committee of Sudanese Doctors said 40 bodies were retrieved from the Nile River on Tuesday. This was a day after the attack on the Khartoum sit-in. The World Health Organisation says health workers were raped and facilities destroyed during the crackdown.

After months of protests by the Sudanese people, longtime ruler/dictator Omar Al-Bashir was removed from power in April. Along with his removal, came many concerns about who would be taking control over the country. There was cautious optimism from many within the country and around the world.

After Al-Bashir’s removal, an interim council was put into place. There were many disagreements between the protestors and the military about the makeup of the council. The military wanted to constitute a military-majority council while protestors mainly wanted civilians on the council. In the past few weeks, these consultations seemed to have broken down.

There was a military crackdown on protestors this past week with the death toll going into the hundreds. Sudanese security forces used extreme violence to break up the week-long sit-in outside the military headquarters in Khartoum.

The military council headed by General Abdel Fattah al-Burhan decided to cancel any agreements with the protestors. They were forced to retract that with the mounting international condemnation of the violence. They also called for elections to take place in nine months.

Protestors have rejected going into talks with the military again. Speaking to Reuters news agency, Madani Abbas Madani, a leader of the Freedom and Change alliance said: “Today the council invited us to dialogue and at the same time it is imposing fear on citizens in the streets.”

Speaking to The Daily Vox, Ebrahim Deen, researcher at the Afro-Middle East Centre said important to note is that the military arrested Al-Bashir to protect their own interests. They expected the protests to stop once Al-Bashir was removed he said.

In the past weeks, the leadership of the military council at different times had meetings with the governments of Saudi Arabia, Egypt and the United Arab Emirates (UAE). Deen said it seems like the council might have received approval from any of these countries to proceed with the crackdown.

“It does seem that after they got back from that trip, it does seem like the military were given the green light and just went in. The military always wanted to crackdown on the city,” he said.

Just after the removal of Al-Bashir the Saudi government pledged  $3 billion in aid to Sudan’s transitional military government. This prompted protestors at the massive sit-in protest in Khartoum to sayl: “We do not want Saudi aid even if we have to eat beans and falafel!”

Deen says this was an attempt by the Saudis and Emiratis to take advantage of the situation by propping up the military.

“Al-Bashir was very politically savvy,” said Deen adding that he was able to ensure he always had the support of a regional power. Al-Bashir counted Iran, Qatar, and the Emiratris all as his allies as different points. Deen says he also had the support of the United States under Trump, Russia, and China.

In 2015 Saudi Arabia began a war with Yemen. Al-Bashir pledged his support for Saudi putting aside Iran – his longtime ally. However, he had a relationship with Qatar and Turkey as well managing to have allies on each side of the conflict.

Analysts said this showed Al-Bashir’s decisions weren’t ideologically based but rather pragmatically motivated. Speaking in 2016 to The Guardian, Magdi El Gizouli, an independent analyst said Sudan’s move towards Riyadh is a “relationship of convenience”: “I don’t think there’s a strong ideological commitment.”

After joining the Saudi’s in their war against Yemen, Sudan received $2.2 billion. This was of huge help to a country that had been given many sanctions from the United States and other international organisations over the many human rights violations the government were carrying out.

It was written at the time by Giorgio Cafiero: “Sudan — an Arab League and African Union member situated along the strategically prized Red Sea — plays a unique role in the Middle East’s geopolitical order, a factor often overlooked by analysts.”

Sudanese people on the Saudi-Sudan links

Reem O. M. Gaafar is a Sudanese doctor, writer and documentary filmmaker currently based in the UAE. She says Saudi is one of the strongest reasons the “revolution” almost aborted.

Many reports have shown that Saudi Arabia have paid the military and in particular General Mohamed Hamdan Dagalo, commonly known in Sudan as ‘Hemeti to supply children soldiers to fight in Yemen.

Gaafar says “one of our demands of a civilian government is to discontinue all wars inside and outside Sudan and end our participation as mercenaries in Yemen, and this is something KSA has no intention of letting happen.”

She adds that another problem Saudi Arabia has with “the Sudanese revolution is that its success means an end to the chaos of land grabs and exploitation of natural resources it has going on.”

Ramey Dawoud is a Sudanese hip hop artist and actor. Dawoud says Hemeti and Saudi Arabia have close ties linked to the war in Yemen.

“They (the generals) took a tour to Saudi, Egypt and the UAE and when they returned that’s when the attacks started. When we say the Gulf countries are supporting the killing of Sudanese people we aren’t just taking a guess here, we have proof of these things,” he said.

Deen says while comparison could be made between what happened in Egypt post-revolution and Sudan, the condemnation could be the difference.

A further consolidation of the military’s power in Sudan would be disastrous for the Sudanese people. “The population can’t restrain the military. Only global powers can,” said Deen.

There is a need for a civilian council to be put in place to usher in free and fair elections in a few years. Deen says if the elections take place in a few months time, it’s likely there won’t be any change in regime.

participation Sudan in all AU activities “until the effective establishment of a Civilian-led Transitional Authority.”

“These countries will need to push back and persuade the regime to stop,” he said.

Author’s note: This piece has been updated with comments from Sudanese people.