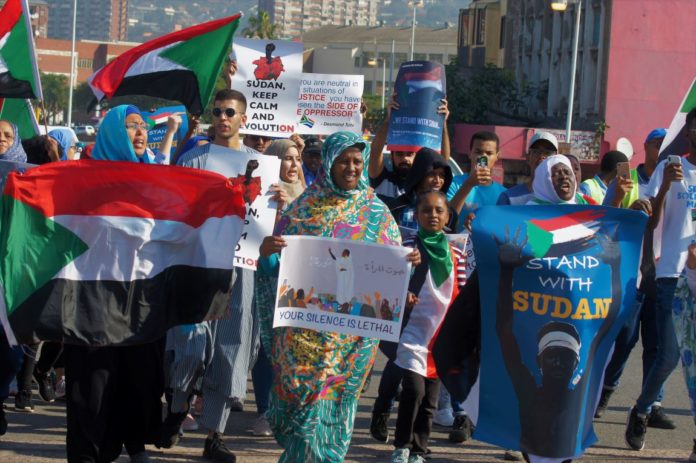 As atrocities in Sudan continue gaining spotlight since the June 3rd Massacre, Sudanese-South Africans marched in Durban, calling for peace, justice, and stability in the country.

On Saturday, the Sudanese community in Durban marched from King DiniZulu Park to the Durban City Hall, in protest of the June 3 massacre that occured in Sudan during protests for a civilian government. Masses of people have been killed, injured, raped or torture in Sudan in the past few weeks with no accountability.

Human rights lawyer and march organiser Yasin Osman said this was the first mass killings of its kind in the capital city, Khartoum.

“We’ve never witnessed anything like this in the capital, but it has happened in the outer areas. Today we are marching in solidarity with our Sudanese people and also, we want to raise awareness,” he said.

Osman also urged the South African government to help ease the situation in Sudan by lending a helping hand to support Sudanese.

“I hope that South African government supports the civilian government and denounce the transitional military council which is responsible for the atrocities, all the mass killings and rape crimes because they happen from their orders. As a leading human rights pioneer in the whole of Africa, we wish South African community can create an example and stand with Sudan,” Osman says.

Sudan has been living under Omar al-Bashir’s oppression for the last 30 years, who was then forcefully removed from power in April this year.

Osman explained how power has been at play in Sudan for the past years.

“For the last 30 years in Sudan, it has never been about right versus wrong or lawful versus unlawful. It has always been about the powerful versus the powerless,”he said.

Over the past few killings, rape crimes, and dispossessions have been reported in Sudan.

Osman said: “The struggle against the government was consistent since its inception in 1960, but in 2014 it erupted into mass gatherings, and the civilians were met with death from the military, on the orders of Omar al-Bashir.

“Six months ago, the struggle reached its boiling point on April 6, more than 2 million Sudanese men, women and children marched on the streets of Khartoum to reclaim their homeland and to demand a civilian led government which resulted in the removal of Omar Al-Bashir,” he said.

On June 3, the Sudan massacre ensued where over 500 people were killed, 723 injured, 54 raped, over a 1000 missing and about 118 bodies were dumped into the River Nile, with no one held accountable.

“Protestors were asleep, they lit fire to their tents and when people realised what was happening and began running, they were met with bullets in their backs.

The militiamen kept following them, beating anyone they came across with sticks, raping women and children, tying rocks to their feet and tossing them into the Nile.”

Suleman Dangor, a religion and theology studies Professor at the University of KwaZulu-Natal has urged the South African community to stand up and support Sudan, saying the situation in the country is of serious concern.

“I’m very concerned with what’s happening in Sudan because it’s the same thing that happened years back. The military is in charge and the civilians want to take over and have civilian rule so we hear of torture and killings. I’m here today to lend my moral support as a South African to Sudanese,” he said.

Marchers said they were hoping the message would reach masses and that African countries would stand with Sudan.