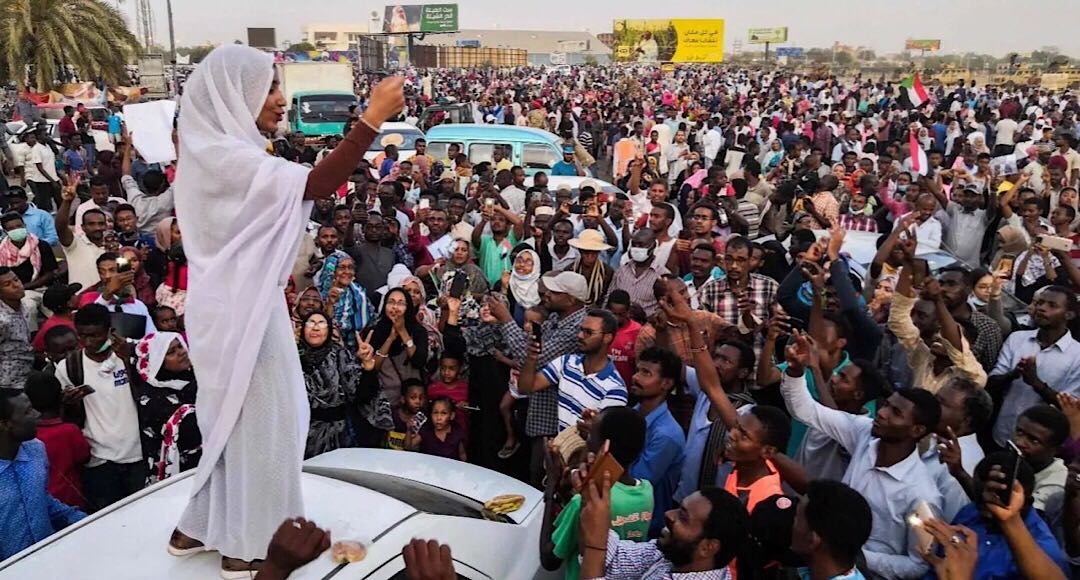 After almost 30 years in power, Sudan’s Omar Al-Bashir was ousted and arrested by the army on April 11. This came after about five months of protests in the country. Now that Al-Bashir is out, the question remains where to for the country.

Speaking to The Daily Vox, Institute for Security Studies (ISS) senior researcher Allan Ngari said it is a very important moment for the people of Sudan and the African continent. “We really need to celebrate the fact that the will of the people is coming into play.”

Women of the Protest

The image of the woman standing atop the car in the middle of the Sudanese anti-government protests went viral this week. Alaa Salah is a 22-year-old student at the Sudan International University. She said she got on the car during the protests because she wanted to speak to the people. “I wanted to speak on behalf of the youth… I wanted to come out and say that Sudan is for all.”

Salah was just one of the many women who were pictured in the frontlines of the protests. Ngari said protests in Sudan has largely been repressed by Al-Bashir and the military. “What you saw with the image of that woman on that car, appealing to the masses is really such a breath of fresh air. It is indicative of women taking the role as equal members to equally protest regimes that are violating their rights.”

During the protests it is the woman in Sudan who have been disproportionately targeted during government crackdowns. This is according to Human Rights Watch. However, during the current protests, it was the woman who emerged on the frontline. Sudan has a rich history of women fighting their patriarchal society and the oppressive regimes, and excelling in whatever field of work they are in.

When did the protests start?

In the past few the protests have received overwhelming attention in the media and on social media. However, they have been happening since December 2018. People from the town of Atbara in northeastern Sudan took to the streets following the tripling of bread prices. This was because the International Monetary Fund (IMF) told Sudanese officials they need to phase out wheat subsidies amongst other things to strengthen revenue. These austerity measures were met with popular resistance.

Protestors demanded peace, freedom and the downfall of the regime. This indicated that the protests were not simply about the rising bread prices. Instead it was a protest directly aimed against Al-Bashir and the military dictatorship he was in charge of. Those protests are reportedly the biggest threat to his rule since Al-Bashir came into power. Writing for the Washington Post in December, Nisrin Elamin and Zachariah Mampilly said: “What is clear is that decades of penned-up frustration is now finding release…”

The protests as the final straw

Ngari says the December protests were indicative of 30 years of Al-Bashir’s rule where the socio political rights of the Sudanese people have been trampled upon. “It culminated into a people who felt extremely threatened and violated – and as a result has risen to this public protest which led to his fall.”

He says that a lot of credit can be given to the people of Sudan who continued fighting in the face of embargoes and repression. “It is years of oppression that led to this.” said Ngari.

He came into power in 1989 through a military coup that overthrew Jafaar Nimeiri’s military government in 1985. Ever since he came into rule, Al-Bashir used the military to dismantle any opposition to his rule. This meant detaining and torturing dissidents. Party members and supporters of Al-Bashir were placed in local governing structures to squash dissent. His government worked extremely diligently to introduce many policies which assured its hold over the country and its resources.

Political parties, youth movements, trade unions and civic activities have all been banned by Al-Bashir’s government in the 30-years of his rule. Notwithstanding the civic and political impact of these policies, the social impact has been grave as well. The polarisation of Sudanese society has seen few wealthy people with many poor people. Unemployment is extremely high in Sudan, and to stifle resistance even universities have faced restrictions.

Writing for the Mail & Guardian, journalist Simon Allison notes: “It turns out that replacing a dictator with his top lieutenant is not a path to freedom and prosperity.” It is for that reason there is likely to be a cautious optimism around Sudan. Just hours after it was confirmed that Al-Bashir had stepped down, the army released a statement. The statement was made by Ibn Ouf who was Al-Bashir’s vice-president and Defence Minister. This seems to indicate much of the status quo has not changed.

Ngari says in the next coming days there needs to be a negotiation around the leadership of the country and elections need to happen in line with the constitution of Sudan. “We are hoping that there will be peace and that the step down won’t cause any bloodshed,” said Ngari.

There have been suggestions that Saudi Arabia might offer Al-Bashir asylum once he has stepped down. However, Al-Bashir has many charges from the International Criminal Court (ICC) laid against him. This is crimes against humanity, war crimes genocide. He is the only person to have all three ICC charges against him. “Unfortunately if he goes to Saudi Arabia, the arm of the ICC will not be able to get to him because Saudi Arabia is not a party to the ICC Statute,” said Ngari.

In Algeria people were protesting since February against 85-year-old president Addelaziz Bouteflika seeking a fifth term. Algerians took to the streets in protest against demanding change from Bouteflika’s 20-year rule. Even though Bouteflika stepped down in April, he has been replaced Abdelkader Bensalah – a close ally of Bouteflika. Elections have been set for July but protests continue against Bensalah.

“In Sudan and Algeria, it is people finally getting up and saying they are tired of being ruled by autocrats and they want to rule their own future and take their destiny into their own hands,” said Ngari. What remains to be seen is if the popular will of the people will be actually . For now there is only cautious optimism in both Sudan, and Algeria.