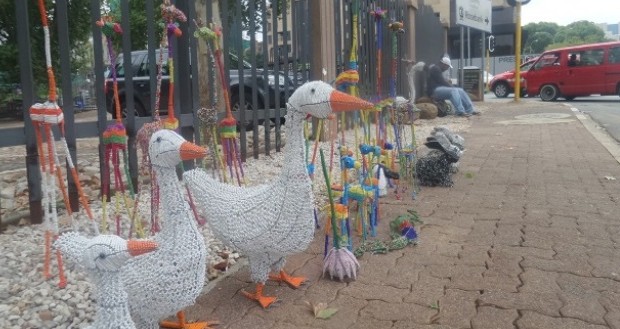 If youâ€™ve ever been to Rosebank, chances are youâ€™ve driven past TELMORE MASANGUDZA, PETER KAZOWA and the display of beaded artworks theyâ€™ve sold at the corner of Jan Smuts Ave and Bolton Road for the last ten years. Stuart Lewis spoke to the two Zimbabwean artists about the falling rand, rising inequality and surviving harassment by the Metro police.

Telmore Masangudza (38) and Peter Kazowa (39) met in school back in their native Zimbabwe and have been friends ever since. While still students, they learned to make sculptures out of wire and beads and, since arriving together in South Africa in 2005, have made a living doing just that.

â€œWe came here and we saw that our brothers were again doing these wire things. So we started to make them as well. We used to make a good living but not these days, things are very bad,â€ complains Masangudza as he threads blue beads onto the bare frame of what will be a life-sized rabbit.

â€œUsually we sell two or three things a day or nothing,â€ he continues. â€œRabbits this size are R300 now. They take maybe three days to make. We were selling them for R250 but the rand is falling down now so fees are going up. Itâ€™s now about R30 for half a kilo of beads.â€

Directly across the street from where they sit, famed South African artist William Kentridgeâ€™s artworks stare out at them from behind the display windows of the Goodman Gallery. Behind them, middle-class South Africans buy fountains and ferns at the Garden Shop.

â€œUs, we are foreigners here. What we need is just to survive. So we just make our things here and sell them. What we make goes back to home to support our family. Things are very difficult there in Zim. Even the rand is not working there anymore,â€ says Masangudza.

While we talk, luxury 4x4s and taxis filled to the brim stop briefly at the robot, with the occasional passenger looking over the small display of artworks that two old friends are seated next to. For the most part, the men ignore them but they are constantly on edge, looking out for the tell-tale blue, white and orange of the Johannesburg Metro Police. Kazowa, the quiet one of the two, clicks his tongue. â€œIf they come, you take your stuff and run. They take the stuff and say weâ€™re not allowed to sell here. They give us a receipt for R2500 and R300 for disturbing the robot so it may be a R2800 fine. Itâ€™s a lot of money.â€

â€œThey come every two or three days, or even every day. They are just passing here. Sometimes if they come with one or two guys, they ask for money. R50 or R60. Itâ€™s cheaper than the fine,â€ he adds.

Kazowa and Masangudza sit on large brown stones placed on the small bed of gravel between the green palisade fence of the Garden Shop and the pavement. Ostensibly, the edge of the pavement marks the end of public property and so the men are free to sell on the gravel bed they claim. The stones they are sitting on were placed there by the Garden Shop after they saw them being chased away by the Metro police, says Masangudza.

Only a fraction of their goods sit next to the pavement. The rest are stored in the nearby block of flats where Masangudza lives. While they showcase small pieces on the street, all their larger artworks such as a life-sized warthog or a gold-beaded AK-47 have to be kept out of reach of the cops.

If a customer asks for something they donâ€™t have on display, one of the men escorts them back to the block of flats to find the thing they are looking for. â€œWe can make anything you want,â€ says Masangudza proudly. â€œBring us a picture even and weâ€™ll make it.â€

â€œJa sometimes the people driving past say, ‘Hey, your things are beautiful. One day we can come and buy some.’ But we never see them again. Sometimes one customer, she or he will come and give us an order for R10,000 or R15,000.â€

â€œBut thatâ€™s only once in a year, hey,â€ he adds, shaking his head.

Masangudza and Kazowa are available for commission pieces. To contact them, email them at tmasangudza@yahoo.com.

The Daily Vox, in partnership with Oxfam South Africa, will be highlighting the challenges of socio-economic inequality in a special project this month.Â

21-Year-Old Entrepreneur: ‘I Started My Business With No Funds’