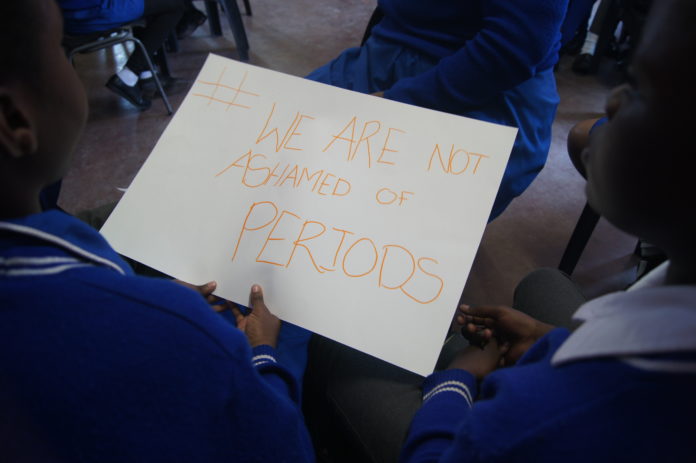 Candice Chirwa is the director of Qrate, and a menstrual health activist. She recently completed a master degree at Wits University focusing on menstruation. During an interview with The Daily Vox Chirwa said: “my masters told me that a lot of the times when girls first start menstruating, they think they’re going to die.” It is this idea which shows the importance of menstrual education. Providing comprehensive and inclusive menstrual education ensures that no menstruator thinks they are dying when they get their first period.

In 2019, the England Department of Education released new guidelines for sex and health education. These guidelines included adding menstrual health education for girls and boys in primary schools. This is an important point as firstly menstruators are not always women. Transgender, intersex, or non-binary people also menstruate. Secondly by including boys and men in the education it helps to fight stigmas around shame and embarrassment associated with periods.

Another important component of menstrual education relates to the mental health component. There have been strides made to ensure proper physical health care is provided for menstruators. A lot more needs to be done. However, another aspect of health needs to be considered and that’s mental health. Many menstruators are bullied for having their periods and this can lead to feelings of anxiety and depression. This is something that needs to be considered as well. It is all these ideas which are incorporated into the workshops carried out by Qrate.

Thinking behind Qrate and the workshops

Chirwa says being in the academic space, she realised there was a lot being written about social issues, but she questioned who this was being written for. With Qrate, Chirwa aimed to create content in a fun and child friendly way around social issues with a focus on menstruation.

“We have different pillars, which we work on, which is service, education and advocacy,” said Chirwa.

Through the workshops, Chirwa said she didn’t want it to be where she and the other facilitators went in and imposed their views on the students. Instead, they wanted the young people to really learn to navigate how the workshops are run. Through the workshops, they discovered that most of the stigma around menstruation for students came from their parents. That’s why Chirwa says they plan to expand to include parents in their workshops.

For the past couple of months, Qrate has been holding workshops at schools, and with youth groups on menstruation. On the 2019 International Day of the Girl Child, they held a workshop at a school in the South of Johannesburg. A total of 150 female students were part of the workshop. The Daily Vox attended one of the workshops conducted with a group of Grade five learners.

Chirwa said through her research she realised it wasn’t as impactful when speaking to youth to just get someone to speak to them. That’s why the workshop gets the students to engage in different activities.

“A kid could act out a scenario and most of the time they’ll remember that scenario more than just from reading a textbook,” said Chirwa. The students learnt about many different issues. The workshop attended with the students reading through the “period pledge”. This is a pledge intended to fight stigma around menstruation for the students.

In the book, It’s Only Blood author Ann Dahlqvist writes about how the shame around menstruation can prove deadly for many. The book covers the experiences of people from Bangladesh to Kenya, Ghana, India and Sweden. In all of these places, there is a great deal of stigma around menstruation. However for many, this stigma is deadly.

This could women who are forced to stay in dangerous places while on their periods. Then there are women who work in unsafe places and are forced to use products that are life-threatening. There is also menstruators who do not have access to adequate infrastructure and sanitation during their periods.

During the workshop, one of the questions asked of the students was regarding the correct disposal of sanitary pads. All of the students agreed that the pads should not be disposed of in the toilet. This is another reason why education is important. Chirwa said in some schools, there are still pit toilets. So the students might dispose of their sanitary products in the toilets, leading blockages which means the students are without a toilet.

That’s why Chirwa says infrastructure at schools and other places need to include the proper infrastructure to ensure adequate facilities are available for menstruators. This forms part of menstrual education albeit at a higher level.

The benefits of getting a good menstrual education can’t be quantified. Chirwa touches on a few of these benefits. Getting a good education leads to period positivity. This is the idea that there is nothing shameful and taboo about period. It encourages the normalisation of talking about periods. By speaking about periods many of the harmful stereotypes around it can be deconstructed. Chirwa said something she found through the workshops is that regardless of financial and class background, the majority of the menstruators were not confident.

This means that even if the students had the necessary knowledge there was a lack of confidence regarding their periods. Through educating the students, and teaching them about period positivity it’s about the idea of creating that confidence and positivity.

To find out more about the work Qrate does, you can find them on all social media platforms @Qrate_SA.