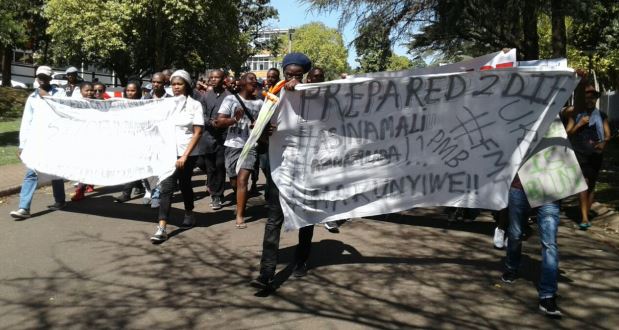 Speaking at a specially convened imbizo in Johannesburg on Monday, President Jacob Zuma once more referenced the death of a worker at Wits University to draw attention to unseemly elements withinÂ the student movement protesting the cost of tuition in South Africa.Â Â The Fees Must Fall (FMF) protests have certainly takenÂ a sombre turn sinceÂ Minister of Higher Education Blade Nzimande announced the death of a worker who had been employed at the Jubilee Residence Hall at Wits.

Celumusa Ntuli is reported to have passed away after inhaling the fumes of fire extinguishers that were released by protesting students who were attempting to coerce workers and students to protest.

The exact cause of Ntuliâ€™s death is however still being investigated.

Nzimande cited the incident as proof that a small minority of students are holding universities to ransom and intimidating fellow students.

Coercion has however become a recurrent feature of this yearâ€™s protests.

Fasiha Hassan, outgoing Wits SRC Secretary General says that the Wits leadership is clear in its directive that no one should be forced to protest.

â€œWe reject the threat of violence to force people to protest. Ours is to conscientise the student movement, and therefore gain support,â€ she said.

Hassan said it has been difficult to identify those who engage in coercive tactics, and student leaders have made it clear in mass meetings that violence and coercion is not to be used.

â€œFor the last few days, weâ€™ve managed to engage the students a lot better on these issues and weâ€™re finding a lot more cooperation,â€Â she said.

Some students believe coercive tactics can be justified. Naseerah Essop, a student at the University of Johannesburg said:â€œEven if they [students] are being forced – they should understand that it’s for the sake of bettering other people’s lives and making a change,â€ she said.

But in the main, students are opposed to them.

A University of KwaZulu-Natal student, who asked not to be named, said it wasnâ€™t right for students to intimidate others or to coerce them into striking. â€œStrikes get violent and I wouldn’t want to get hurt or confronted by people who are striking because they are threatening me â€¦ It’s your choice to strike and is someone’s else’s choice not to. People need to respect the fact that others may disagree with the strike,â€ she said.

Nontobeko Zungu, a protestor involved in the Fees Must Fall movement at the Nelson Mandela Metropolitan University said she those that do not support the protests for free education should stay home.

â€œI donâ€™t think people should be forced to take part in the protest but I think itâ€™s important that every student thatâ€™s going to benefit from the free education partakes in the protest. We encourage people who do not understand our vision to stay at home and not dilute our struggle,â€ she said.

Ngawonke Bulala, a Sasco student leader at NMMU, agreed that students should not be forced to participate in protests.

And yet coercion does happen.

A UKZN student at the Westville campus, who asked not to be named, said he had been subject to coercion from other students. â€œI have been asked to take part in a protest and threatened if I refused,â€ he said. â€œThe protesters threatened to beat me up if I didnâ€™t join them.â€

Last week, a 10-second voice note saying that anyone who goes to class will be beaten up circulated among students:

Another student at UKZN, Bongeka Mntaka, told the Daily Vox that protesting students threw stones at her when she tried to go study in the library.

Ebrahim Fakir, political researcher and commentator, told The Daily Vox that coercion tactics undermine the credibility and legitimacy of the studentsâ€™ cause.

â€œThe moral force of the political claim of the argument falls flat when students to resort to these coercive means. So even with people that might have been sympathetic to them, they are losing trust,â€ he said.

For Fakir, the â€œflat structureâ€ of leadership combined with coercive tactics means a lack of accountability.

â€œWhen you engage in those acts of coercion, no one takes responsibility for the fallout, which is precisely what the non-democratic nature of this movement is. How do you have a movement which has no one who takes responsibility for anything, no one is accountable for anything that they do whether they coerce students, burn a library, engage in arson or they hurt a person or in the most extreme case, like this, a person dies. Forget the question of political culpability, itâ€™s that no one can be held accountable or can take responsibility.â€

People must not be forced to join the protest. Convince them, don’t force them #FeesMustFall