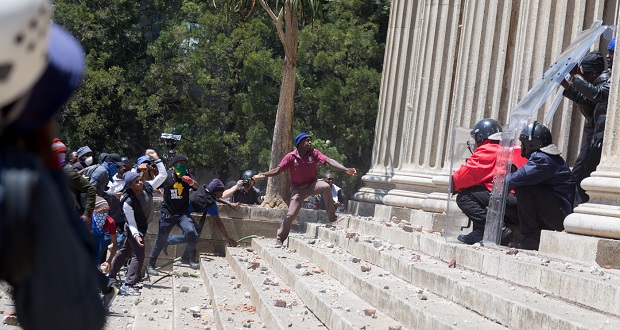 As Fees Must Fall protests across South Africa enter their fourth week, there is heightened tensions at Wits University following violent clashes between private security, police and protesters who are determined to push for a university shutdown. Academic and former Wits lecturer KHAYA SITHOLE, who worked on the model for free education that students are proposing, spoke to The Daily Vox about the student movement at Wits.

The movement at Wits appears to be very fragmented. Do Wits students know what theyâ€™re fighting for?

South Africans are very good defenders of the status quo, simply because they havenâ€™t imagined a new reality. Thereâ€™s a problem with the process of transformation because it implies slow methodical change. But there are things that need to be restructured completely and education is one of them. The system as it stands isnâ€™t working, and thatâ€™s because of the process that itâ€™s taken.

The most difficult aspect of where we are today is that the students are being accused of shifting the goalposts, and that talks to a lack of coordinated communication both within the student movement and across the greater stakeholders.

In October 2015, people were clearly articulating their support for fees to fall, not necessarily for fees to be written off altogether, and that was the core narrative. Later on, the movement gravitated towards the total eradication of fees. It now becomes a question of which is the dominant narrative.

Somewhere along the line, we have lost the essence of what the core narrative is. If you ask students on the ground right now, theyâ€™re likely to have different answers to this question.

Some say the students are only continuing the protest because they want to save face. How true is this?

Over the past 15 years, youâ€™ve had vice chancellors who met with the state and complained about declining subsidies. They achieved absolutely nothing. In 12 months, the students achieved everything the vice chancellors were supposed to. I donâ€™t think students have anything to be ashamed of. Even if you donâ€™t get an overall abolishment of tuition fees tomorrow, they still brought the argument much further than what the vice chancellors did in all these years.

Every single year for the past fifteen years, universities have had strike action, which just doesnâ€™t get reported. Last year because it all happened at the same time, so people became aware of it. Even this year, UKZN started [protesting] about six weeks before everywhere else and nobody noticed. When the action is fragmented, people donâ€™t think thereâ€™s a problem. What this movement did was consolidate the mass frustration and [highlight] the extent of the problem.

How university vice chancellors still think theyâ€™ve got the option of being on the wrong side of history is a strange phenomenon to me. Assuming none of this happened, these are still the same people responsible for announcing on the fee increases and the students see them as the direct face of that particular struggle.

Is Wits trying, though?

According to that statement Wits released, Adam Habib is trying. But if any part of management spend a day or two on the ground, then theyâ€™d understand what the answer is. The students assume that a shutdown is their only bargaining power. Of course theyâ€™re not going to give that away. How do you say to someone, â€œOkay weâ€™ll be on your side as long as you give away the only thing that you have?â€ It just doesnâ€™t work. So you need to be on the ground and say, â€œOn the basis that you continue this, how do you fast-track the process of us establishing some form of solidarity?â€ And thatâ€™s a national question. Even Max Price is doing it completely wrong, because he is still of the view that he can dictate to students â€“ no, you must be seen on the ground.

Is a shutdown the only way for students to keep the ball in their court?

Thatâ€™s what they believe. And you canâ€™t dispute them on that notion right now. You saw it last year, that was what got them bargaining power. People are very good students of hindsight – â€œlast year we did this, and it got results, so until someone comes up with a model that generates the same results or better, this is what weâ€™re going to hold on to.â€ If we had a history of proactive engagement that yielded significantly impactful results, we could explore options. But until we can bring a template, students will only use this one.

Is Wits stuck in a rut of students versus management?

If itâ€™s a conversation just between the two, we are stuck because management is on the wrong side and students are not taking kindly to that. Unfortunately, it appears that only management is not saying, â€œWeâ€™re with you,â€ and all this is doing is delaying the confrontation with the state. That delay is actually costing the universities themselves because theyâ€™re the ones whoâ€™ll have to accommodate that eventually there will be a resolution and the academic year will resume. I donâ€™t think flooding the university with police is responsible, because soon thereâ€™ll be a casualty and every single person there will be responsible for that. And that takes us into territory we donâ€™t want to be in.

Wits management is creating a system where no one takes them seriously anymore, sending multiple emails confirming and then changing things. Thereâ€™s a serious crisis in leadership on every level, across the board, and I worry that we are fast approaching a point of no return.

Is it fair to say that both students and management have a responsibility to de-escalate the situation?

I think itâ€™s a dual responsibility. Student leaders have the capacity to say to the student movement, â€œLook guys, politics is a game of concessions, nothing else. Weâ€™re willing to look at things this way, provided they look at it this way.â€ And right now it appears there is no concept of that anywhere in the student structures; concessions are not happening anywhere at all. And that creates permanent tensions within the system because when the minister delegated the responsibility to the universities, it made each university accountable to its own constituency, so they canâ€™t account for any means of action that will leave them exposed. Therefore, they need a holistic directive that will say, “if you do it this way, then weâ€™ll cover your bases this way”. Negotiate from the ground, and then we take it from there. We need to be in that spirit of collaboration like we were last year â€“ this year itâ€™s just been abandoned.

Based on some of the violence on campus, is what is happening a case of police versus students?

If we look at the history of protest action in South Africa â€“ considering what escalates tension, and what makes a Marikana â€“ and for a country that has such a rich history of understanding protest action and what it means to people, the fact that we come from a history where people know that if they burn something and get a reaction, and to then be part of a state that ignores you until you do something like that? We probably come across as a country of idiots, of people who donâ€™t understand their own history. Itâ€™s very disturbing to have the ANC being of the opinion that these people are rogue. You gave them the template. You keep telling people that you won your freedom through this type of approach. So how do you then disagree with them that this approach works?

I think the reality of it is that you need to compare last year to this year. Last year, nothing was damaged or broken at Wits because students were very clear about pursuing a particular agenda. This year, when talking about throwing rocks, itâ€™s important that people spend time on the ground and understand the ideas. For example, if people want to go inside Great Hall to get to Solomon House to host a meeting, let them. When you prevent them from doing that, you then play into the metaphor of what the whole movement is about. For me, this metaphor is about the barriers to access on the basis of the threat that they are posing, that is, a financial burden. They are trying to dismantle that structure where you can implement burdens on people. Imagine the three million South Africans aged 18 to 24 that are stuck outside, and cannot even access universities â€“ and thatâ€™s what the movement is about. And what are the police protecting?

*This interview has been lightly edited for clarity.