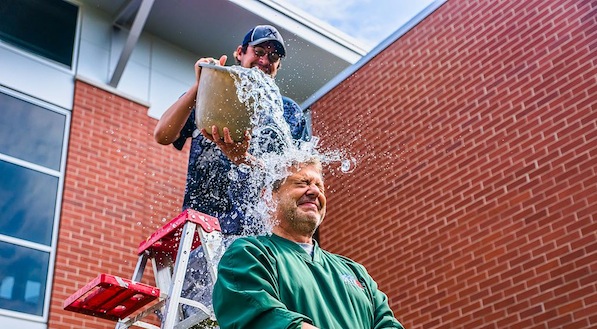 It might seem strange to throw a bucket of ice water over your head in the name of charity, but for the ALS Association, this viral campaign is raising some serious cash and drawing awareness to an illness that affects millions.Â ALS refers to amyotrophic lateral sclerosis, a disease that progressively deteriorates nerve cells and muscle function, and eventually results in paralysis and death.

Many of us Â have heard of the ice bucket challenge through the Twitter hashtag #IceBucketChallenge. The campaign went viral earlier this year, and since then, everyday folk and celebrities have shared their hilarious #IceBucketChallenge videos. The origins of the ice bucket challenge are hard to pinpoint, but as of 2014, even former US presidents are getting involved.

The rules are simple: within 24 hours of being called out to join the challenge, participants have to film themselves declaring their acceptance of the challenge, and nominate three others to join. They then have to lift a bucket over their heads and dump ice water over their bodies. The footage then gets posted online with #IceBucketChallenge

But, there is another option. People can forfeit the challenge by donating $100 to the ALS Association.

Questions have been asked about whether the initiative is actually helpful or simply another case of â€œslacktivismâ€. Supposedly, participants in the challenge are meant to donate $10 when they complete their task. But itâ€™s unclear whether everyone who posts a video makes a donation.

Electro music producer Deadmau5, real name Joel Zimmerman, ripped into to the campaign on Twitter, saying dumping ice water around does nothing to fund ALS medical research. He then proceeded to donate $10,000 to the ALS Association.

Criticism around water wastage has also gained momentum. The state of California is currently experiencing one of its worst droughts ever with nearly 100% of the state in â€œsevereâ€ drought, and â€œwater copsâ€ patrolling the street to fine people who waste water.

Despite the controversy, the ALS Association saidÂ on ThursdayÂ that it had received a whopping $41,8-million dollars in donations from 29 July 2014 to 21 August 2014. The money is being used to research a cure for ALS.

Weâ€™ve rounded up six of the best celebrity #IceBucketChallenge videos for you.