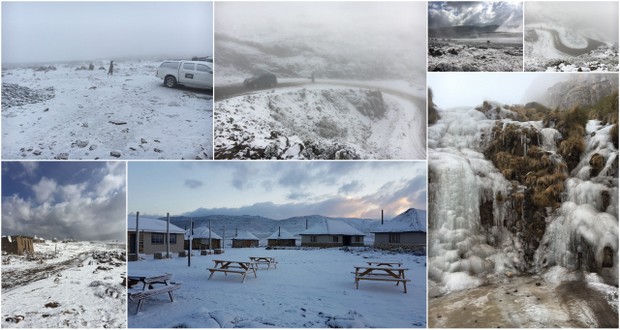 â€œIt was the best of times.â€

Places such as Nottingham Road, the Drakensberg and Mooi River in Kwazulu Natal have been covered in snow. And we seem to love snow days so much (rare as they are). People chasing after the snowfall caused bumper to bumper traffic along the N3 highway.

And itâ€™s not just KZN thatâ€™s blanketed in snow. Radio and television personality Anele Mdoda shared these images from the Eastern Cape.

Guys !!!! This is our house in the rurals in ncembu, Eastern Cape.

â€œIt was the worst of times.â€

News24 reportsÂ thatÂ the death toll in flooding in KZN has risen to three. â€œThe body of a Chatsworth woman, whose car was washed off a low-lying bridge, and the body of a man in Cato Manor have both been found,â€ says the report.

Some roads and cars have been washed away and there were also reports of landslides from all over the city. According to Arrive Alive, the road between King Shaka airport and Margate along KZN coast is heavily flooded. The SA Weather Service says more than 133.8mm of rain has been recorded in the area over the last 24 hours.

Amanzimtoti and Stanger are said to be worst affected. On Tuesday afternoon, the eThekwini Municpality put a notice out on its Facebook page saying: “North and South beaches in Durban have been closed due to high seas and storm damage. The decision to close beaches has been taken as a precautionary measure – to ensure the safety of residents and holidaymakers. A major clean-up operation will be undertaken. The public will be notified once the beaches have been re-opened.”

â€œIt was the age of wisdom.â€

Can we just pause for a round of applause for this person?

Came out the crib and the river was raging like a 702 listener ranting about the ANC. I hope we still have a crib by the time I get home.

â€œIt was the age of foolishness.â€

While some have been super excited about the snow, building snowmen and enjoying the temporary winter wonderland, farmers around the Drakensburg area are not well pleased. Die-hard snow chasers have broken fences and left gates open giving the animals a chance to wander outside.

Yaaaay to those intrepid snow chasers that broke fencing in the midlands,to go make a snowman – And 17 cattle escaped onto oncoming traffic.

These photos taken by hiker Ahmed Mather at Sani Pass over the weekend are incredible. â€œIt was the winter of despair.â€

Keep in mind those without proper shelter and heating to keep them warm and dry.

#Eskom has warned that it expects electricity demand to increase sharply due to the cold front. https://t.co/EvNsZYd7Uv