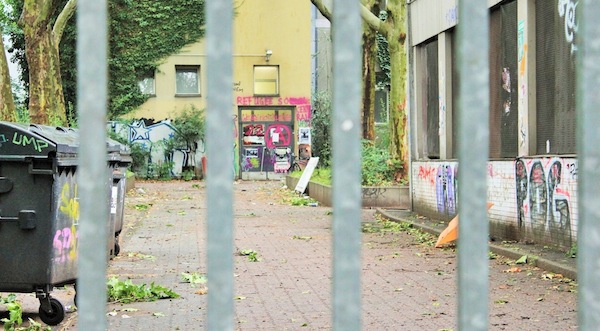 Berlin, Germany – Dressed in a lilac golf shirt and blue jeans, Adam is a far cry from other fearless cap and keffiyeh wearing refugees waving from the roof of Gerhart-Hauptmann School in Berlinâ€™s artsy Kreuzberg district. He is one of 40 to 50 refugees from Africa and the Middle East including Tunisia, Chad, Mali and Syria who have occupied the disused school, resisting an eviction order from the local council. After 18 months of up to 500 refugees and migrants living in the school, district authorities ordered the mass removal of people, but a small group of refugees resisted the move.

For the past 16 days Adam has spent most of his time on the roof, protesting his right to stay in Germany. With a background in economics, he left his home in El Geneina, in West Darfur Sudan in 2009 bound for Egypt where he worked for a few months before travelling to Syria via Jordan. Unable to stay when the “Arab Spring” broke out, he fled to Turkey, then Greece, and finally he made his way to Germany, where he has claimed asylum. Sitting under a leafy tree to shelter us from the afternoon rain, Adam told his story:

â€œI came to Oranienplatz* in October 2012 and I decided to stay because it was more free than the lager [refugee camp] in Braunschweig where they put all the people from Sudan. In the winter it became too cold for some people to continue living outdoors, so we moved into the school. The council didnâ€™t like it and tried to kick us out, but we refused… we had nowhere else to go. A month or so ago we had a meeting with the Ministry of Interior Affairs and they said people would have to move and that they would help people to get places to live and assist with the right to stay. So some people agreed, but it was a trick and they got deported. After that we refused to go to the lagers and began our strike.

“The police came… we were only 40 refugees, but they sent 1,000 police for us. Â When you have more than 1,000 police surrounding you a lot of things go through your mind. You donâ€™t know what to do. If you come out they will arrest you and you cannot come back here. We decided we have to stay and get residenz [residency permit], not just for ourselves but for everyone who stayed in the school. The district says they donâ€™t have the capacity to give us refugee status, but many of us have been waiting a long time for a decision on our applications. I waited two years and three months only to get rejected, and now I have one month to appeal the decision or I get sent back to Sudan. I canâ€™t go back to Darfur. We have to put pressure on the authorities.

”For 16 days now we have been in the school. It’s been tough and we are united as a group, but the living conditions are not easy. We have no shower, no kitchen… it’s just a place to sleep. At night the police become aggressive; they watch us from the roofs of neighbouring buildings. They shine a bright white light on us because theyâ€™re filming us. Sometimes they wave bananas as a way of being racist, others make handicapped signs [as if] to say â€˜we will come and kill youâ€™. But we wonâ€™t give up. We feel ashamed of the police and itâ€™s not what we expect from the police of a country like Germany.

”But we are thankful to the people of this neighbourhood; they have shown so much support and solidarity. We really appreciate it and we hope we will be able to carry on living with them. This fight is our right and we believe in it, no one can go back to living in the lager, no one can stay in isolation or be stopped from movement and these rights must be respected by the government.â€

*Oranienplatz is a square in Kreuzberg district where the refugees set up a squatter camp and where more than 100 Â refugees and Roma people lived before moving into the empty school. The square is now under police watch and refugees are not allowed to stay there overnight. Tendai Marima is freelance journalist currently in Berlin, Germany as Â a Fellow of the International Journalists Programme.Â