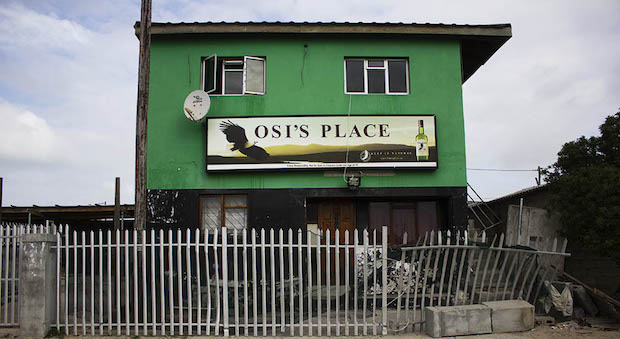 Taverns in Khayelitsha have come under scrutiny after a stampede at Osiâ€™s Place, a tavern in the township, led to the deaths of eight people, the youngest aged just 15. But as tavern owners squirm under the spotlight, the question remains: is there anywhere else for Khayelitshaâ€™s youth to find their fun? RAâ€™EESA PATHER reports.

In Cape Townâ€™s city centre, young people get thrills from the bustle of clubs, concerts, and eateries. But in the city’s townships, nightlife is scant and often reduced to ill-lit taverns. On one grim night in June, a gunshot sparked a stampede at Osiâ€™s Place, a tavern in Khayelitsha, and eight young people lost their lives. One of them was Vuyolwethu Mbono, a 17-year-old grade 11 student, who died in the back seat of her friendâ€™s car, while being rushed to hospital in the early hours of a Sunday morning.

â€œI lost my sister,â€ says Brenda Gladile, Vuyolwethuâ€™s older sister. â€œIf sheâ€™d died while she was sick, it would be better for me to accept. But now she died in an accident, at a tavern, at her early age.â€

On a sunny day in Khayelitsha, Makhaza, the area where the tavern is situated, is quiet. A young boy kicks a soccer ball outside the bent steel gate of Osiâ€™s Place. Vuyolwethu was trapped under a heap of bodies just behind this gate during the stampede, and a group of people outside attempted to break the gate to help those in danger.

A gunshot from inside reportedly sparked the stampede. The bannister of a staircase collapsed and bodies tumbled down, on top of one another. Vuyolwethuâ€™s friend, Khanyisile Siyengo*, also 17, heard her cry out from beneath the bodies.

â€œWe fell down together, trapped under those people, and it felt heavy; it felt like there were more than a hundred people on top of me. I thought I was going to die,â€ Siyengo said. â€œI heard Vuyolwethuâ€™s voice once. She was crying.â€ Gladile now sits inside the small home she once shared with her sister. The kitchen is behind her, and in front of her is a meagre living room with scattered, worn benches. The only adornment in the room is an A4 sheet of paper printed with a photo collage of her sister: a gentle reminder of the girl who once lived there.

Vuyolwethuâ€™s mother works all day, and her father spends most of his time in the familyâ€™s former home in the Eastern Cape. The teenager spent most of her time at home with her sister, chatting as they did the housework so the home would be clean when their mother returned from work.

The search for justice
Her funeral was held in the Eastern Cape this past weekend, but the family hasnâ€™t managed to pay the costs. The owner of Osiâ€™s Place offered to compensate the victimsâ€™ families with R1,250 each, but it isnâ€™t enough to cover the R15,000 a funeral would normally cost.

â€œIt doesnâ€™t matter whether he pays or he didnâ€™t pay. I wonâ€™t accept it, because I lost my sister and she wonâ€™t come back,â€ Gladile says. Sheâ€™s angered by the lack of security that allowed her underage sister into the tavern.

â€œIf you have a tavern, you have rules. He should apply the rules of the no underage. There is another tavern here in Khayelitsha; they will search you, they have cameras, but he didnâ€™t have that.â€

The Social Justice Coalition (SJC), a civic organisation in Khayelitsha, has demanded the tavernâ€™s liquor licence be permanently revoked and the tavern be shut down. The Western Cape Liquor Authority (WCLA) has so far temporarily suspended the licence without objection from the tavern ownerâ€™s lawyers.

The WCLA will present a case against the tavern on 17 August, alleging that the owner contravened his licence by selling alcohol to under 18s, and kept the tavern open past closing hours. But a police investigation is still pending and the tavern ownerâ€™s lawyers believe that relevant information has yet to reviewed.

â€œThereâ€™s too much vagueness around this thing,” said Ben Mathewson, a lawyer representing Osiâ€™s Place, who instructed his client not to discuss the incident with media.

A place to play
But even as the case moves forward, taverns remain deeply entrenched in Khayelitshaâ€™s social scene. The SJC reports that there are 1,400 illegal taverns in Khayelitsha, and community leaders are now speaking out against the negative impact of taverns on young people.

â€œItâ€™s the most unfortunate impact that is placed by taverns in Khayelitsha. You will find these kids roaming around the streets [late at night],â€ says Mpucuko Nguzo, the ward councillor for Makhaza. â€œWe are creating a society of drunkards, because children at an early age are exposed to taverns, to liquor and all sorts of things.â€

Taverns are traditionally set up in residential homes. The bottom floor of the home is occupied by the family living there, while the top floor is where the liquor and music flows. The Khayelitsha Development Forum (KDF) has taken the lead in assisting the families affected by the stampede, but addressing the problems posed by taverns is difficult in a township where youngsters have no other options for entertainment.

According to the KDFâ€™s chairperson, Ndithini Thyido, the township has too few sports fields and community halls, and there are no restaurants at existing malls. There are also no movie theatres or places to rent movies.

â€œIf someone wants to date someone, the general place to go would be a shebeen because thereâ€™s nowhere else to go to take a new courtship,â€ Thyido says.

While he says itâ€™s difficult to predict if investment into recreational activities will give youth the outlet they need, he believes that young people should have alternative options to taverns.

â€œItâ€™s only natural that the kids be allowed space to play. It is a right of the 15-year-old to have fun, the problem is where they have this fun,â€ he says.

Although Khayelitsha has a shebeen organisation to deal with issues around taverns, the KDF says that tavern owners are absent from meetings, only contacting the council when they need to renew their licences. The KDF believes that engagement between tavern owners, consumers and the larger community needs to begin in order to address how taverns can be safer.

While Siyengo spent most of the night revelling in music and dance with Vuyolwethu, the loss of her friend and the danger she faced has diminished her excitement for liquor and taverns.

â€œAfter this, I donâ€™t want anything to do with alcohol. I wonâ€™t go back to Osiâ€™s Place. They know about the rules at Osiâ€™s Place, but tavern owners only want money â€“ they donâ€™t care how old you are,â€ Siyengo said.

For Brenda Gladile, itâ€™s already too late. Her sister had dreams of becoming a social worker or a doctor, and one day zooming around the city in a Golf GTI.

â€œI will miss when we (used to) sit here at home and sing after supper. She was a bit strict, she always said we must clean after supper, because mum is going to shout at us. So, she would say letâ€™s make sure then when mum arrives everything is clean,â€ Gladile says.