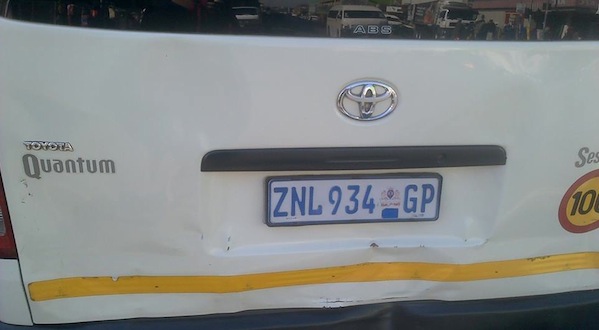 This kid didn’t have taxi fare for his first job interview. What happened next will lift your spirits. AAISHA DADI PATEL reports.

Author Malaika Mahlatsi – known as Malaika wa Azania – found a hero in her taxi driver while on her way to Home Affairs. MahlatsiÂ was travelling from Dobsonville to Johannesburg when she witnessed an exchange that restored her faith in humanity â€“ or at least taxi drivers.

A young man about to board the taxi told the driver that he was short R2 on the fare, and asked if it would be okay for him to get a ride anyway.

The taxi driver asked where he was headed, and he said he was off to his first job interview. He was nervous and excited he said â€“ heâ€™d graduated recently and this was the first time he had been called for an interview.

The taxi driver, Thilivhali Khubeka, told him to come on board. When they reached the young manâ€™s stop, Khubeka told him to keep his money and not worry about paying the fare. This way heâ€™d still have money to get home again.

“Don’t give up, brother, and don’t become one of those young boys in the township who smoke nyaope.”

MahlatsiÂ posted this story on her Facebook page and immediately received a barrage of comments from people touched by it.

“I posted the status and then I didn’t have network for 10 minutes. My network came back and I had 2 000 likes. I was shocked”, she said on Jozi FM last night.

Khubeka’s spirit of ubuntu struck a chord with South Africans. The SowetanÂ picked up the story, a filmmaker asked if he could meet the Khubeka and shoot a short film about him, and Mahlatsi promised to write a column on it in this week’s Sunday Independent. “When I drive the taxi, I like to meet people, and get to know them. I’m just a young guy trying to survive, like anyone else. I went to school and I came this side to look for a job and I couldn’t find one. But I said to myself, I can’t just sit and do nothing. So I started driving taxis. I’ve only been doing this for a month.”

When asked why she thought so many people had been touched by the story, MahlatsiÂ said: “Taxi drivers have been given derogatory names, with bad connotations … this has reawakened the belief in me that this can begin to diminish.â€

Mr Khubeka, the everyday hero, we salute you.