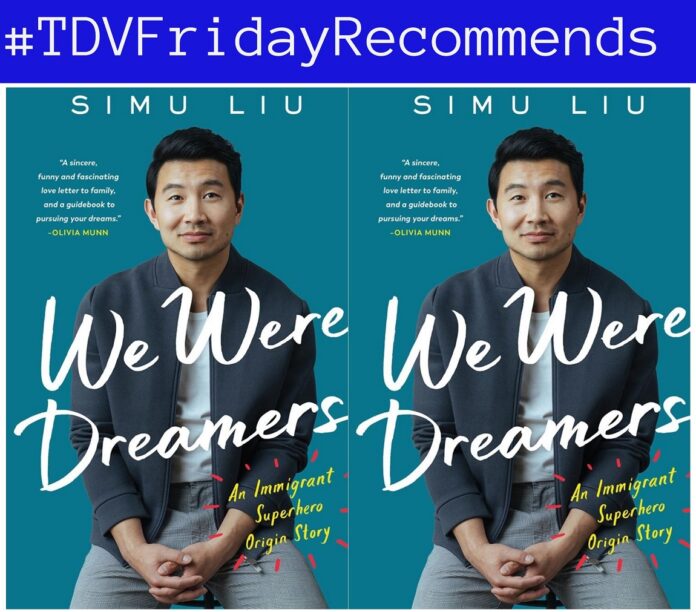 In We Were Dreamers, Marvel’s first on-screen male Asian superhero writes his story. Simu Liu rose to fame playing Jung, the estranged son in the comedy series, Kim’s Convenience. However, Liu really made his mark when he took on the role of Marvel’s Shang-Chi in the movie Shang-chi and the Legend of the Ten Rings.

Welcome to a new series on The Daily Vox: #TDVFridayRecommends. It’s the Friday Recommends series. Every Friday, we are going to be sharing something we would like to recommend or unpack to our readers. This could be a book, movie, restaurant or even an event. This week we are looking at the book, We Were Dreamers.

In the prologue, Liu writes that readers are probably wondering how he ended up with the role of Shang-chi and that’s why they bought the book. However, that is not necessarily the only reason to read the book. Even if you haven’t watched Kim’s Convenience or Shang-chi, if you’re not a Marvel fan and might not even not know of Liu, this book is a great read for everyone. But also if you have not heard of Simu Liu, where have you been? The man is literally everywhere at the moment.

Liu has a funny, self-deprecating and relatable way of writing that is sure to draw the reader in. He writes simply with slightly cringey metaphors. But that all serves to make the book all the more fun to read. From his childhood in Harbin, China to growing up in Toronto, Canada, Liu paints a vivid and sincere picture of his life. He says his story is the story of thousands of immigrants who are struggling to make a life for themselves in a foreign land. But the story is uniquely his throughout the book.

In several interviews and articles and even in jokes on the Facebook group Subtle Asian Traits, Liu has spoken about trying to gain his parents’ approval. This is the eternal struggle of immigrant children. It’s about the balance between following their own dreams while at the same time, understanding the struggles their parents endured to make a better life for them. Liu weaves history and context throughout the book. This is important because it lends understanding and sympathy to the decisions made by his parents.

The book is sad at times, hilarious at other times, deeply serious and intense at others. Throughout it all, Liu’s trademark voice can be heard as he tells his story. Another great thing about the book is the kindness which Liu uses to tell the story. He speaks extensively about the clashes he has with his parents and the impossibleness of sometimes finding common ground. However, with the history and context that he provides to their backgrounds and childhood, it allows the reader to have empathy and understanding for his parents and for Liu as well. He brings the reader into his life and shows how difficult but rewarding it was to mend his relationship with his parents after years of effort.

The book is a testament of Liu’s hard work and effort but also of his parents, grandparents and his community. After all, every immigrant knows – it takes a village and We Were Dreamers shows that beautifully.