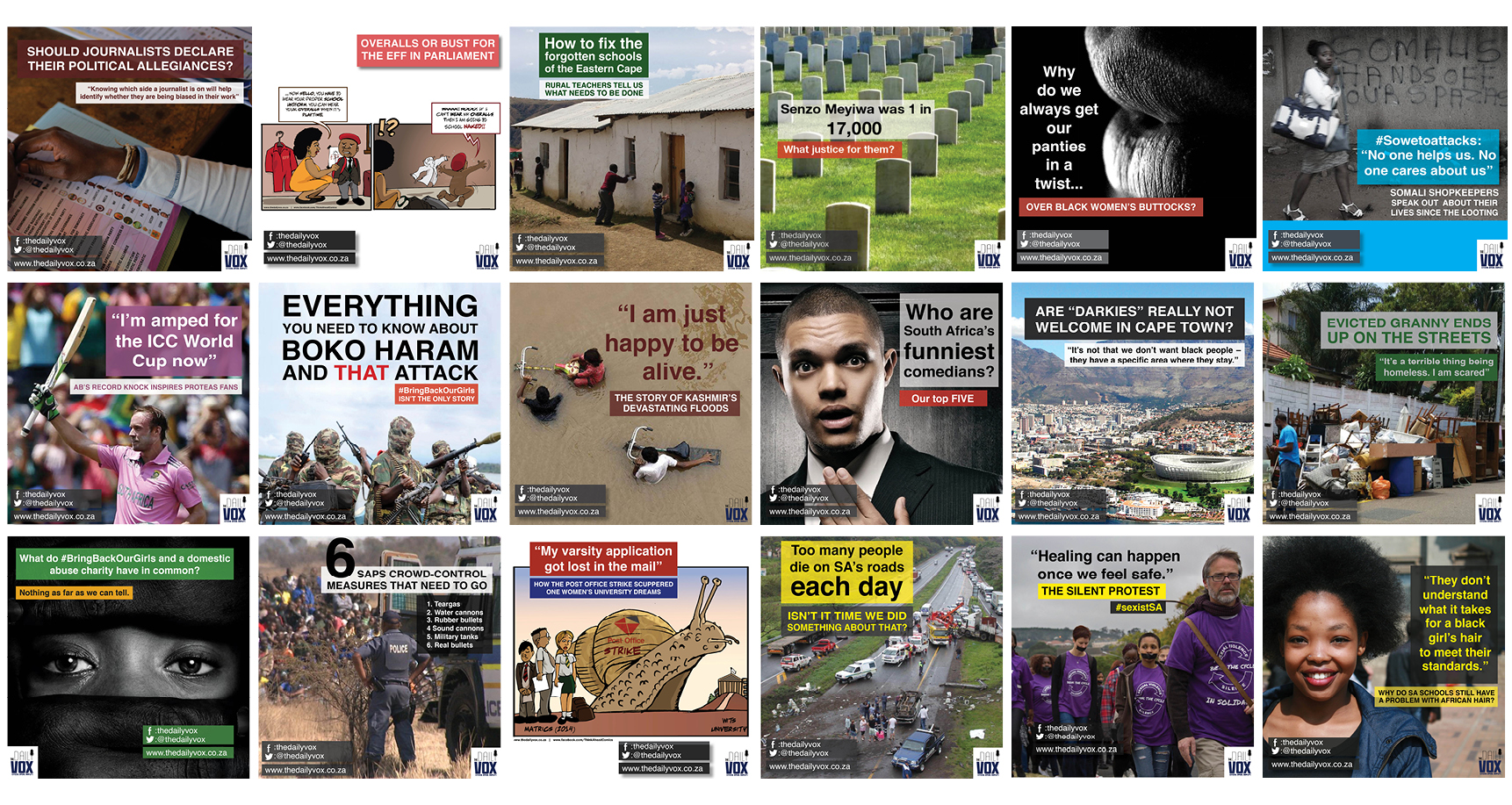 The Daily Vox (TDV) started its journey as South Africa Votes 2014. Co-founders Azad Essa and Khadija Patel wanted to cover the 2014 election in a way that was different than traditional media outlets seeing that it would have been the first election counting the votes of the ‘94 ‘born-free’ generation. They wanted to amplify the voices of young South Africans. With positive feedback and fundraising, the election project turned into a news outlet. And in 2019 TDV hit a milestone of existing for five years, no small feat for a media start-up in the tough South African landscape. A big part of TDV’s endurance is the team of dedicated people have been pushing this dream forward.

The foundation of TDV was its editorial team who helped cement TDV’s agenda. To celebrate our fifth birthday, we spoke to former members of the editorial team, Faranaaz Parker, Theresa Mallinson, and Benazir Cassim who were instrumental in laying our foundations.

I feel very strongly about TDV and the work they’re trying to do. They’re a very important part of the media landscape in South Africa and they’ve always done the best that they can with the resources that they have to tell the stories of ordinary South Africans and also to help mentor and guide young journalists in South Africa.

I heard about TDV when it was SA Votes in 2014. I used to see some of the stories going on Facebook. I didn’t know Khadija or Azad very well but I had interacted with them a few times. I was a journalist at the Mail and Guardian and I quit because I had a baby. Khadija phoned me and asked whether I would be able to help out. The big drawcard for me was that I would be able to work from home. That’s the thing I remember the most about that early time at The Daily Vox: everyone was doing it in addition to whatever else they were doing. Everyone was pouring all their energies into making this thing work with limited time and resources.

We were trying to figure out what to call the organisation and there were emails going back and forth. One of the names that had come up was “Amplify” and a lot of people liked that. We almost called The Daily Vox “Amplify”. We tried to get the URL but someone else owned it. Plan B was The Daily Vox. If you look at The Daily Vox logo it’s a microphone. It could have been very different, it could have been an amplifier or a loudhailer. We went back and forth about the colour. In the beginning, it was predominantly yellow and then it went more towards blue.

I was also there when Fees Must Fall started in Cape Town. I don’t think anyone realised how massive it would become. But the reason we were kind of tuned in to that whole movement is because our reporters were all politically conscious students. They knew the leaders, the issues, struggles on campus. They felt it brewing in their networks. What scared everyone is the violence of Fees Must Fall. Our reporters were just kids essentially. They hadn’t had the experience you would have expected of a journalist reporting for five or 10 or 15 years.

Suddenly, everyone who worked at TDV was thrown into this high intensity situation that involved hundreds, sometimes thousands of people moving. Police, tear gas, rubber bullets were all involved. It was scary for everyone involved, for the reporters on the ground and for us watching footage on television screens knowing our people were out there. People were wrung out by the end of it but they did really excellent work and put a spotlight on a story that wasn’t being taken seriously at first. Once larger media organisations started taking notice of it, they tended to focus more on the violence while our reporters focussed on what students were dealing with and what they were trying to achieve in the long run. I was also there for the 2016 round, strangely, but my memories of that is that is was a lot less intense.

The thing with being a small organisation, which doesn’t have a lot of resources behind it, is that at any moment it might just collapse. My hope for the future of TDV is that they achieve sustainability. I also hope that TDV can expand. The initial goal was always to have reporters in parts of the country where you don’t hear anything from, learning the stories of South Africans who are far from the urban centres, to amplify those voices you never hear from in the media.

I also hope TDV can continue to work with young journalists. We’re immensely proud that there are people who came out of our teeny tiny newsroom, which started as a virtual newsroom, who are now excellent reporters who have done fantastic stories that have reached larger audiences and taken their skills to other newsrooms, strengthening the media landscape in South Africa more generally. I’m very proud of that.

I was the assistant editor for The Daily Vox for the first part of 2015. I started at TDV about six months after it had already started with the 2014 elections. I found out about it because I used to work with Khadija at The Daily Maverick. She approached me and asked if I wanted to be a part of the team. It was an amazing experience for me. I worked very closely with Faranaaz who was the managing editor but also with all the young journalists on the team, many of them still students.

I was helping the young writers hone their journalism skills and write structured news stories with the correct spelling and grammar. I felt that I learnt even more from them than they did from me, being in South Africa and being exposed to young people’s voices and concerns. I had already left by the time Fees Must Fall started but I was there for Rhodes Must Fall and it was such a powerful experience. I feel like TDV were really winning that story. Stories aren’t about winning but they owned that story. For me, it was a real example of people always say platitudes about how we need to hear more from young people, we need to incorporate their voices. TDV wasn’t about saying that stuff. It was about just going and doing it.

I would like for TDV to get more funding so that it can support more students and young journalists to help them grow and develop. As much it’s a good starting point for young journalists careers, an even more important function is that for older people we need to hear and read what the young people are thinking. Onwards and upwards!

I can’t remember how I first heard of TDV, but I know I followed them on Twitter. That’s actually how I heard there was an opening for a sub-editor, from a tweet, so very millennial. I really love what TDV stands for: telling the stories of the most marginalised and highlighting the issues of communities that we don’t hear from enough. I think that’s what attracted me to working there. It felt like we did our activism through our journalism. It was also refreshing that TDV is unashamed to take a stand for justice from being vocal about our support for Palestine, to highlighting the need for free education, to telling the stories of the LGBTQI community and shack dwellers, and sex workers. It’s so important to be on the right side of those issues and tell those stories with compassion and sensitivity. It’s what’s missing from a lot of reporting these days and I’m so proud that we made it our priority and  set ourselves apart from others.

Covering the FMF protests was an absolute rollercoaster. We were ahead of the story before it broke in 2015 because we’d been writing about student issues for a long time. Having reporters who were still students gave us an advantage because we were able to navigate student politics and establish the issues early on. It was also interesting to see how student politics was affected by politics, infighting, and issues of class. I’m incredibly proud of the work we did because we were such a small team and we worked in a tiny room in Khadija Patel’s backyard. We communicated remotely via WhatsApp voice notes and Google Hangouts when our reporters were on the field. I remember editing stories using free WiFi in the library when I couldn’t make it to the office. I’ve never seen teamwork like I did during FMF. We operated on adrenaline and cheese samoosas. It was exhausting, but so exciting. We were trying to record history but at the same time we had a stake in the outcome.

Our reporters wanted free education as much as the students on the frontline. We understood the struggle. That’s why it was so important that we centered the students as much as we could. As much as people will say we were biased, the fight for free education needed that bias because so many others were painting the students as ‘savages’ who were hell-bent on destruction. It was also very interesting to track developments between 2015 and 2016 protests. Our institutional memory was so important to give context to the events that happened in between. Had we not been following the protests from before they became international news, we would have missed out on a lot of nuance and our coverage would have been the same as other organisations who just didn’t get it. I am so ridiculously proud of the work the team has done over the past five years, not just our FMF coverage.

My hope is that TDV continues to tell the stories of forgotten communities with empathy and compassion. I hope they grow every day and that the journalists learn to be good people as much as they learn to be good writers. I hope the stories they write about soften their hearts rather than harden them to the ugliness of the world. I hope they prioritise their own physical and mental health because this is an unforgiving environment and so often we are so preoccupied with getting the story that we forget about taking care of ourselves. I want the publication to grow and take important stories to every corner of the world. I want TDV to never forget what we stand for: amplifying the voices of those who have been ignored and bringing them from the periphery into our hearts and minds. Happy birthday to TDV!