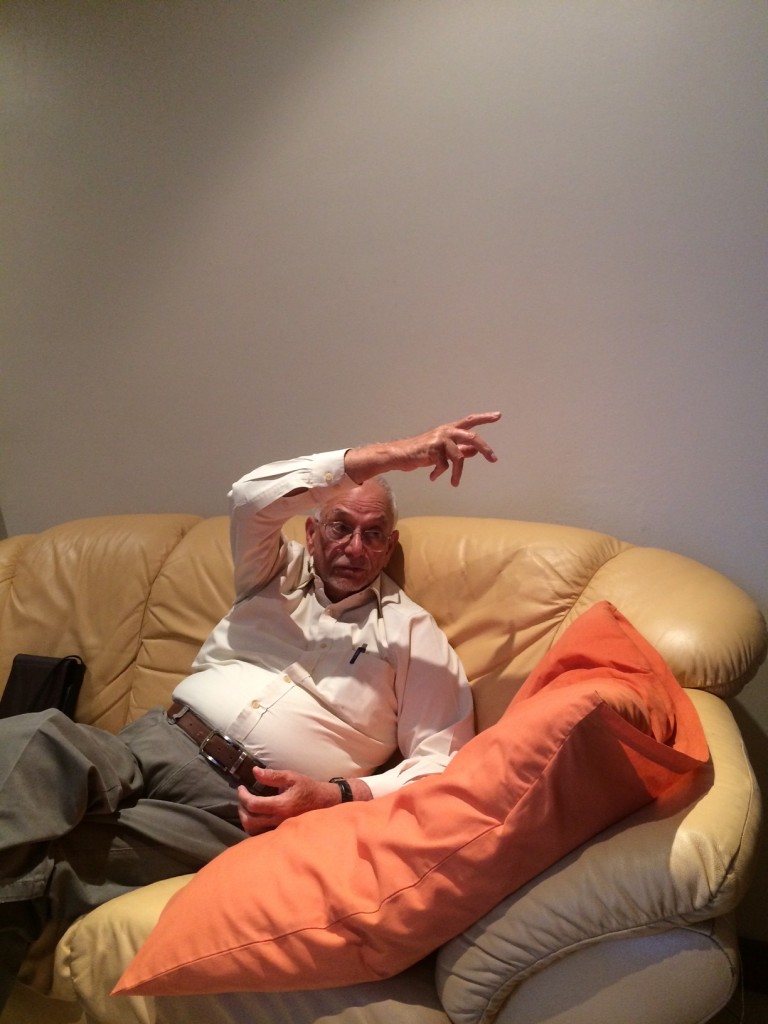 Alimia Koor, a 77-year-old man, has experienced first-hand the ugly side of South African history, but remains hopeful for the future of our beautiful country. “Where we are sitting right now”, Koor says, as we sink into leather couches in the lounge of his Westdene home, “thirty years ago we couldn’t sit here. We had no right to be in this area.”

Uncle Alimia is my best friend’s nana; her maternal grandfather. He is smartly dressed in a formal shirt and tailored pants belted at the waist. He is strikingly charismatic. Arriving at his home, I was loathe to disturb his afternoon nap, but he was immediately welcoming. “We lived in Lenasia for 24 years but I never accepted it. Why was I forced to move?” he asks.

Uncle Alimia describes the laws that forced his move from Fietas to Lenasia as “draconian”. â€œApartheid affected us politically, socially, economically…but it helped us maintain our culture. We lived in walking distance of mosques and madressas.” Acknowledging this contradiction, Uncle Alimia feels that one aspect for which we need to thank the ANC is maintaining and building on this religious freedom and accessibility in current South Africa.

“As Muslims we shouldn’t criticise the ANC and ruling government because we wouldn’t be able to be here without them,â€ he says. Remembering his time in ‘Lenz’, Uncle Alimia regaled me with tales of his silent activism and the political support of the struggle that came with living in the neighbourhood where some history was made.

He lived on Impala Crescent, up the road from the landmark Gandhi Hall where he went to hear ANC struggle leaders like Thabo Mbeki and Tokyo Sexwale speak after the ANC was unbanned in 1990.

But it was the death of one of his neighbours that brought a lot of political attention to Lenasia that Uncle Alimia will never forget. “You’ve heard of the late Dr Abu Baker Asvat?â€ he asks.

â€œHe lived five doors away from me. The day he was murdered, I met Mama Sisulu and Winnie Mandela. It was a huge funeral – I don’t think Lenasia had ever seen such a huge mayyit – thousands and thousands of people came to pay respects, and there were ANC and Azapo cadres all over the place. There were police present too. We prayed Janaazah salaah [final prayer for Muslim deceased] under pressure with guns surrounding us…the young blood was very militant and had we not been careful, it could have been a massacre.”

In remembering struggle heroes, itâ€™s impossible to not mention the late Nelson Mandela. “Mr Mandela sacrificed a lot for this country. And he’ll be forgotten soon, mark my words,” says Uncle Alimia. “The way the present system is going on, they’ll forget him. They’re already giving hints – you know this Mantashe guy, he openly stated the other day, ‘Why are you complaining all the time, Mandela Mandela, why aren’t you supporting Zuma’.â€

â€œHow can you even compare Mandela and Zuma?â€ Uncle Alimia asks, incredulously. â€œFair enough, Zuma was part of the struggle, but it’s not the same today and the leadership is not the same. People are complaining about what’s happening with the ANC and how they’re running the country. Unless something happens – but I don’t see anything in the near future, really – they’re going to hold on to this power for a while.

“This whole Nkandla issue – intelligent people, people with a sense of morality are questioning it but Zuma says he’s done nothing wrong! Even Ronnie Kasrils, a cabinet minister under Mandela and Mbeki and ANC all his life says he doesn’t know who to vote for!”

In 1994, Uncle Alimia and his family took a picnic basket and made a day of queueing to vote in the first democratic elections.

“In the first ten years after ’94, we made tremendous progress in every way. But unfortunately the last five years have been bad, and that all depends on your government.” He recognises the need for a strong, fair opposition.

“We’ve been voting the same party all these years but this party is not what it was twenty years ago. If we can vote for the opposition just to boost them and frighten the ruling party a bit, maybe that could work.

Sipping on his 4-o’clock-cup of tea, Uncle Alimia chuckles. “People say, but why should we vote? Well that’s your right, don’t waste it!”