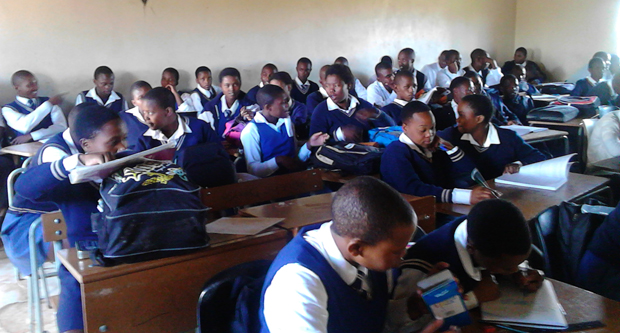 Following a call by teachers unions the South African Democratic Teachers Union (Sadtu) and the National Professional Teachers Organisation of South Africa (Naptosa) for government to scrap or review the progression policy, ZIMASA MATIWANE asked teachers if promoting learners who have failed to the next grade benefits the children.

The progression policy means that a learner can only fail once per phase. (Phases last for three years: grade one to three; grade four to six and so on.) For example, if a learner fails grade one, repeats the year, moves on to grade two, and then fails grade two, they will be pushed up to grade three so that they can stay together with children roughly their age. The idea is that teachers should then support them through the year to catch up with their peers – but this doesn’t always happen.Â Teachers have warned that the policy hinders learners instead of helping them. Fezeka Ralarala, teaching for 27 years, Mount Fletcher Village JSS, Eastern Cape
It is impossible for a learner to do well in a grade they donâ€™t deserve to be in. The policy of progressing students who have failed is not working for both teachers and learners – it should be totally scrapped. When they progress, I work on helping them cope. A low percentage can be helped, but most are demotivated because they struggle more with the next gradeâ€™s work than they did when they were supposed to fail. Some students fail because of social factors, but itâ€™s hard for a teacher to fill the content gap of a learner that has been undeservedly progressing. The government makes teachers implement tools; we are never consulted, yet we know what can and canâ€™t work. Some learnersâ€™ futures are doomed because of this progression policy. Perhaps it could be optional: some learners and their parents donâ€™t even want this progress without passing thing. Nonkosi Yoba, teaching for 30 years, Mount Fletcher Village JSS, Eastern Cape
When a learner repeats a grade they end up understanding â€“ sometimes doing very well â€“ and rightfully progressing to the next class. The progression policy is not working to the advantage of the children: it should be scrapped. When a learner progresses knowing very little, how are they expected to cope in the next grade? I have taught for 30 years and I know older children do bully their younger classmates, but killing their future by sending them to the next grade despite not passing is not a solution. Give an older learner responsibilities in class, make them feel loved and wanted while giving them special attention and working on helping them pass rightfully, it works. Those with learning difficulties have been diagnosed and itâ€™s clear that they will not cope with conventional education. They can progress until they are taken to special schools. Those with no learning difficulties must be left to repeat. Mandla Ndaba*, teaching for 12 years, Ramafole SSS, Eastern Cape
I teach English in grade 10 and I can tell you now this thing of promoting undeserving learners is not working for the benefit of students. I have two extreme cases of learners who failed grade nine but were sent to grade 10. They failed last year because they cannot write. I had to start from basics and go back to as far as grade four: spelling and grammar was poor. Our curriculum is results orientated â€“ I have to work on finishing the syllabus in time. How do I do that when I have 76 learners in one class and half of them have been promoted from lower grades without passing? It is practically impossible. A learner is retained in a grade because us teachers know they will not cope in the next grade and we know how to help them progress rightfully, but when they move to the next grade it becomes harder for the next teacher to get them to the same standard as the other learners. Luthando Gela*, teaching for 4 years, Ramafole SSS, Eastern Cape
Learners end up with self-esteem issues when they are in a class where they feel lost. When they do not understand a bit of what I am teaching, they become angry, sleep in class, and are disruptive. This happens with learners who have progressed because of age. I teach maths to three classes: that is about 180 learners. Although I teach struggling learners during breaks, it is not sustainable. Most end up not coming to extra classes because they lose hope. Some learners are slow learners. I am trained to teach them â€“ I use all the tricks â€“ but I sometimes fail to help each student. It is strenuous, frustrating and is not good for the future of these children. Some end up leaving school altogether. I would rather the government provides alternatives where children will learn skills when the gap in academics become too much to fill. Nothando Yenziwe*, teaching for 21 years, Matshoane SP, Eastern Cape
The policy must be removed totally. Learners must get a good foundation in lower grades: if the learner misses that foundation there is no way they will catch up. The government must start consulting with parents and teachers â€“ information to improve education must come from the bottom up. Itâ€™s hard for teachers. I divide the class into two. I have to go back with the ones who lack â€“ in grade five I have to go back to grade one work. The deserving learners will definitely suffer because I have to concentrate more on the lacking learners. There is no support from the government; the government does not cater for such learners. We are just told what to do, there is no extra support, and you are on your own. My aim is to see all these learners succeed, but they end up dropping out. A child in grade five who cannot spell their name will definitely feel like they are wasting time. Itâ€™s not for the benefit of the children. Itâ€™s frustrating â€“ even to learners â€“ being a misfit academically. This policy is not good for the future of South Africa.

* Names have been changed.

– All images: by Zimasa Matiwane.