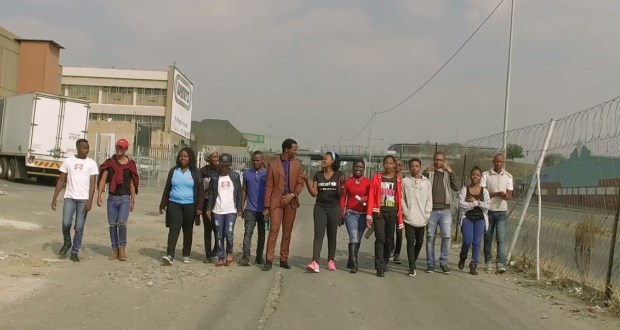 In preparation for the AIDS 2016 conference in Durban I have had some time to reflect. My travels around southern Africa with Unicef are still vivid in my mind, still fresh and moving. In particular, the release of the UnicefÂ video teaser for my upcoming film report of my time in the region has put back in my mind the voices of the young people I met. Voices, this time, of the young people I met in Alexandra, Johannesburg, South Africa. A township that many associate with darkness, but that I now associate with light. The light of bright young minds desperate to rescue each other and ultimately themselves.

My journeys brought me to Alex FM, the revolutionary radio programme formed by the Childrenâ€™s Radio Foundation. There every Saturday, a group of young people whose ages range from late teens to 25, dare to do something phenomenal. They dare to speak with true and unbridled curiosity about the issues that affect their lives.

I was introduced to young men and women who weren’t afraid to ask tough questions: â€œWhy do our parents refuse to open up about sex and the challenges we face as youth?â€ â€œWhy do nurses in clinics shame young people who just want to be tested?â€ â€œWhy do older people from whom we seek guidance and support in this difficult world, use their power to demand sexual favours?â€ â€œWhy do people who have active sexual lives refuse to get tested for various STDs?â€

These questions rang in my mind too, but I had never had the courage to ask them so openly. But these kids do. Every weekend for half an hour, the minds behind this foundation congregate in the tiny studio in Alex to speak about these very same questions to an audience of thousands of people from their community. An audience that may very well include their parents.

I asked them about fear. â€œAre you afraid your parents or elders will hear this and be angry?â€

They responded, â€œThe truth is I have been contacted by some adults who say this subject matter, sex, HIV etc is too much for children. But there are people who have stopped me in the street to thank me for my courage. There are people who say we gave them a way to talk to their children. And that is more important to us than anything.â€ I was very moved. I spent too much time fixated on challenges but they showed me that there are few things that we are too afraid of to try and resolve ourselves. This was illustrated to me by the story of a young woman who found out she was HIV-positive at age 20. â€œI thought,â€ she said, â€œhow can someone so young have HIV? Who will accept me for who I am?â€ She was terrified for some time of telling her close friends and relatives. But when she finally did, she was surprised by their response, â€œWhen I told people, it took such a short time for them to accept me, I felt stupid for being afraid. Now most people accept me and encourage me to stay with a positive mindset. I just take my medication and tell people that the only time I think about my positive status is in the morning when I take my pills.â€

I was so grateful for the experiences I had in Alexandra. Because, despite everything, all the horror one sees in the news, this is a community that people are proud to live in, are proud to be a part of and the young people are dedicated to making it a better and more inclusive place for all.