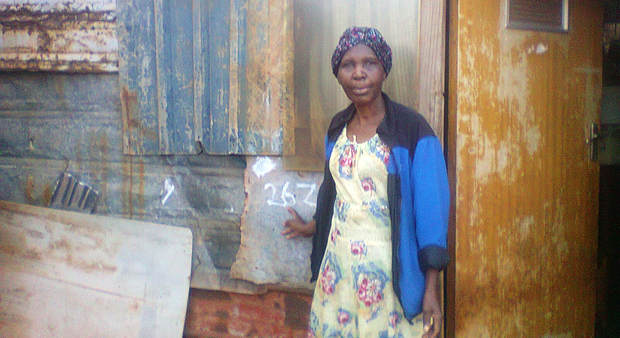 For the past 15 years, residents at Winnie Mandela Park informalÂ settlement in Tembisa township have received municipal bills for servicesÂ they canâ€™t access. The bills come from homes they have been allocated, homes occupied by strangers in an alleged state housing blunder. TheirÂ hopes for a house and basic services now rest on a court case against theÂ Ekurhuleni Metropolitan Municipality. RAâ€™EESA PATHER reports.

Sixty-five year old Johanna Thubakgale lives in a two-room shack with herÂ husband and their 11 children. Like many parents, she considers her children toÂ be blessings, but because she is an elderly woman living without clean water, herÂ children are also the preservers of her dignity.

â€œIf I donâ€™t have my children to get fresh water for me then I would be a laughingÂ stock of the people where I stay,â€ says Thubakgale.

To cook meals for her family, Thubakgale is forced to use a paraffin stove and, when night falls, her only source of light is from the candles she burns. For theÂ past three years, she has been in and out of hospital for lung problems, whichÂ stem from paraffin use.

Yet, since 2000, Thubakgale has been receiving electricity and water bills for aÂ house that she does not live in. Instead, the stand in Tembisa that wasÂ allocated to her fifteen years ago is occupied by strangers.

Housing applicationsÂ from the Winnie Mandela residents were lodged from 1996 to 1998, and afterÂ decades of waiting, the stand has now become an eyesore: sitting just aÂ few metres away from her shack, where she sees it every day without being ableÂ take possession of it.

â€œMy heart is very sore every time I see that place and somebody moving in. I feelÂ that I can collapse,â€ she says.

According to Thubakgale, the people living on the stand say that the municipalityÂ put them there. Her husbandâ€™s name is now on a court application filed against theÂ Ekurhuleni Metropolitan Municipality last week, demanding that the municipality giveÂ them title to the land on which they live and upgrade their residences, or allocateÂ them houses in development projects close to Winnie Mandela Park.

The Socio-Economic Rights Institute (Seri) is taking charge of the case, representingÂ 133 residents who are facing the same situation as the Thubakgales. TheÂ litigation organisation is working with the Ekurhuleni Concerned ResidentsÂ Association (Ecra) to find a solution.

â€œTheyâ€™ve knocked on every door that the could have gone to. They madeÂ complaints to the National Council of Provinces, the Gauteng provincial parliament, Chapter 9Â institutions, and it got to a point where clearly no one was willing to assist themÂ and they said well, our only hope is to go to court,â€ Nomzamo Zondo, Seriâ€™sÂ director of litigation, told The Daily Vox.

According to Ecraâ€™s chairperson, Tsietsi Kukame, the association has approachedÂ presidencies under Thabo Mbeki and Jacob Zuma, as well as the public protectorâ€™s office and the South African Human Rights Commission to no avail.

The Special Investigation Unit investigated the housing allocation in 2006, and aÂ report signed by Devraj Chainee, the head of the municipalityâ€™s department ofÂ human settlements, states that residents have not received possession of theÂ stands they were allocated due to â€œcorruption fraud and/or bribery, which haveÂ resulted in the stand being illegally occupiedâ€, among other factors.

Despite the threat of court action against them, some residents have refused toÂ pay the municipal bills. Many of them, like the Thubakgales, hadnâ€™t realised that theyÂ had been allocated homes until the first bills arrived in 2000. It has taken them 15 years to approach the courts, after exhausting every relevant departmentÂ in government.

â€œThe point about approaching a court is that you have a definite answer whichÂ can be tied to definite deadlines,â€ Zondo says.â€œWhat the court says is that youÂ must do it by this time, and if you donâ€™t then you can be held in contempt.â€

According to Zondo, the municipality has 10 days to oppose the courtÂ application, and another 15 to file a statement substantiating their position. TheÂ municipality told The Daily Vox that it is currently reviewing the case.

â€œThe City of Ekurhuleni confirms receipt of the notice of motion from the court.Â Our legal department is studying the document in order to determine anÂ appropriate response,â€ said Themba Gadebe, spokesperson for the municipality.

Gadebe added that, â€œThe municipality is determined… to address the backlogsÂ that are experience in most of the informal settlements.â€

According to Gadebe,Â the municipality is currently developing houses in Clayville Extension 54 andÂ Tembisa Extension 25, as well as Esselen Park. Winnie Mandela Park residentsÂ are to be accommodated in the Esselen Park and Clayville developments.

But previous engagements with the government have failed Winnie MandelaÂ Park residents, and all Thubagkale has to keep her hopes alive is a court caseÂ which will see more time taken before there is a resolution.

â€œI believe I will get a stand before I die because Iâ€™m praying to God to spare meÂ until I get a house or a stand,â€ Thubakgale says.