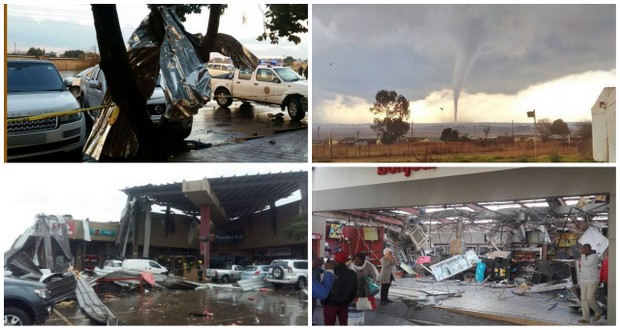 At least 100 people have been injured and 400 homes destroyed after a tornado hit the Tembisa township in the East Rand, government has said.

@eNCA Our friend filmed the #Tornado that caused damage to the mall in #TembisaTornado pic.twitter.com/slotZGml1F

Speaking to PowerFM on Wednesday, Gauteng Premier, David Makhura, said it would take days before the full extent of the damage could be quantified.

“Right now, our priority is to get people’s electricity back on and working,” Makhura said.

#TembisaTornado Rebuilding in the community with help from government including the emergency services pic.twitter.com/2JCoptF1tp

A tornado ripped through Tembisa on Tuesday, destroying parts of Phumulani shopping centre, and the main hospital in the area.

Makhura said it was a miracle that no one had died during the heavy weather. Separately, at least three people died in areas around Durban, following heavy rains and flooding in the vicinity.

On Tuesday morning, the community had started rebuilding their lives, with help from corporates and visits from Julius Malema and Makhura.

Winnie Mandela residents talking to the Premier and Mayor about the damage caused by #TembisaTornado pic.twitter.com/UTT1pI5euv