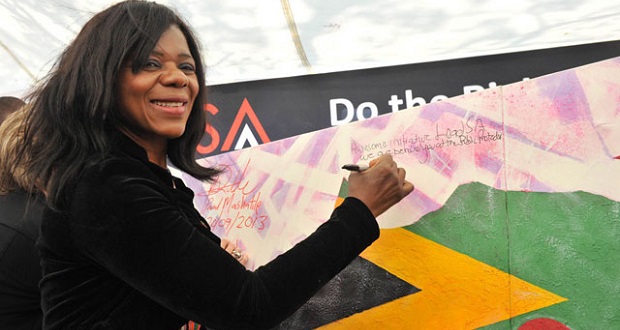 This year has been quite a turbulent one, but SA women stay slaying. The Daily Vox rounds up ten South African women who were just everything this year.Â

One of the most powerful images to come out of 2016 was that of a 13-year-old girl from Pretoria High School for Girls. With her school uniform, arms crossed overhead and beautiful afro, she and her friends stood in front of three white men telling them to, â€œtake us all!â€

Zulaikha Patel: How we all wish we were you

The story of Zulaikha Patel, who had to change school three times because of her hair, resonated with many young South Africans and pointed out just how much our private and former Model-C schools were lacking in transformation. For her bravery she was even announced as one of BBCâ€™s 100 Women of 2016.

Iâ€™m sure we were all thrilled for Caster Semenya when she won a gold at this yearâ€™s Rio Olympics, making her the first South African woman to bring home a gold medal. But it was this win that once again brought up old controversies on whether or not she is hyperandrogenic.

Who is Caster Semenya and why does she matter?

This debate has often overshadowed her talent and hard work, especially after her win at the 2009 World Athletics Championships. The International Association of Athletics Federations had her undergo invasive medical evaluations to confirm that she didnâ€™t have an unfair advantage. Considering all the BSÂ that she has had to deal with over the years, she deserves a medal everyday!

Thuli Madonsela killed it as Public Protector and was shining example of what those who take up public office should be like. She was known for holding those in power to account, addressing corruption and for being the voice of the voiceless. Back in 2014 she was even named one of the 100 most influential people by Time Magazine.

Thuli Madonsela: The woman who defied political loyalty to protect the nation

2016 was also quite a big year for her: during her last year in office but she finalised the much anticipated State of Capture Report amid court cases and much criticism. She also made it on the BBCâ€™s 100 Women of 2016 list and was awarded the Forbes Africa Person of the Year award.

Gloria Serobe is one of South Africa’s leading female entrepreneurs, having over 30 years of experience in leading private and public multinational and public institutions. During this time she established the Women’s Investment Portfolio Holdings Limited (Wiphold), a operating and investment company that is entirely managed by black women.

In 2016 she baggedÂ the Lifetime Achievement Award at this yearâ€™s Annual South African Premier Awards. Sheâ€™s spent years working towards the development and empowerment of black South African women.

Lifetime Achievement Award goes to Gloria Serobe who is paving the way for all women in business in SA.#SAPBA16 pic.twitter.com/KJkIXW1TWy

Zoleka Mandela may have inherited a famous surname, being a granddaughter of Madiba, but this didnâ€™t automatically make her life easier. Sheâ€™s had a tough life, having survived abuse, drug addiction, breast cancer and having to bury two of her children.

Back in 2012 she was diagnosed to breast cancer, which she beat, but in April of this year the cancer had returned. This time she shared her journey through treatment and chemotherapy on social media. She wanted this to give hope, educate and to inspire others on. Like Patel and Madonsela, she was also made it onto the BBC’s 100 Women of 2016 list.

Our South African team really shoneÂ at this yearâ€™s Rio Olympics, especially since we won two gold, six silver and two bronze. On the day that the SA team arrived back in the country, Sports Minister Fikile Mbalula announced additional cash bonuses for medal winners.

In November, Viljoen, who bagged herself a silver medal in javelin, took to social media to speak about her frustrations around the promised bonuses. She took a screenshot of a conversation with Mbalula, which sparked a Twitter spat between the two of them. According to Viljoen, this was not the first time that the South African Olympics Committee has been delayed with its payment. While the rest of the country was celebrating the generosity of Razzmatazz, Viljoen spoke up to remind us that the promises made had yet to be fulfilled.

Received the R70k this morning. It pays to be a fighter. I really never asked for anything other than a promise to be kept. #paidthemoney

Gcina Mhlophe is a multilingual storyteller whoâ€™s been writing and performing on stage and screen for over 20 years. Her focus is on telling traditional African folk tales in indigenous languages, in the form of childrenâ€™s book, plays, music and poems.

Itâ€™s safe to say that Mhlophe is a phenomenal woman. She gave the keynote address at Durbanâ€™s Essence Festival, reflecting on the contributions of African women in 21st century, and was also named as part of the BBCâ€™s 100 Women of 2016. Congrats to Mam’ Gcina!

Another athlete that we couldnâ€™t keep off of our list is Ilse Hayes. At this yearâ€™s Paralympic Games she won herself two silver medals, one in the Womenâ€™s 100m and 400m, pushing up South Africaâ€™s overall medal count to six.

Having been diagnosed with Stargardtâ€™s disease, a condition which affects the central vision, sheâ€™s been involved in Athletics since 2001. Sheâ€™s already taken part in three other Paralympic Games, in Athens, Beijing and London, where she won two gold, four silver and one bronze. At the rate that she is going she will likely continue to slay at other future athletics events. She also won this year’s Sportswoman with a Disability award at this year’s SA Sports Awards.

The winner of sportswoman of the year with a disability is Ilse Hayes for athletics #Izinjazegame pic.twitter.com/5uAps6GhSq

Quarraisha Abdool Karim is an infectious diseases epidemiologist who has spent the past three decades working to prevent HIV infections in young women. Her focus has been on how the epidemic has evolved in South Africa and ways to distribute antiretroviral treatment to areas which lack these resources.

She has been doing all of the things in working towards ending HIV/AIDS. She has won some prestigious awards, but this year she was awarded a 2016 Lâ€™OrÃ©al-Unesco Women in Science Award for her research. We are a nation of award-winning women!

The Girl Without a Sound is the story of a voiceless girl of colour in search of her own sound. This book which made waves earlier in the year was written by Buhle Ngaba, actress, activist and author. About the book she said, â€œthe book was born out of defiance and as a response to the fairytales we were told as little girls.â€

Apart from being a first-time author, Ngaba has been involved in a number of projects throughout the year. She spoke at Cape Townâ€™s TEDx, launched a Constitutional Law Drama Workshop series, acted in a play called Missing and done many other great things. 2016 has really been her year, and we look forward to more slayage in days to come.