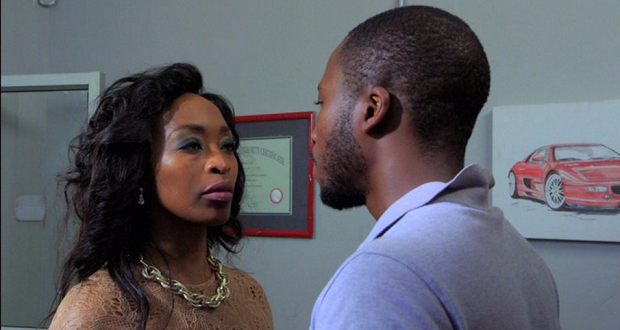 Uzalo has been throwing its viewers into the mix since its second season first aired. The Daily Vox rounds up plot twists that we probably did not see coming on the show this year.

After MaMlambo told her she was pregnant, Smangele took a home test and the results came back positive. She did not hesitate to tell Ayanda because of her excitement, but it turned out that the home test she took gave her the wrong results. She got the shocking news that she wasn’t pregnant when she visited a doctor. But she continues living with the lie because of her obsession with Ayanda but how long will this last?

No one could have imagined what Sbahle could have been up to in Joburg before she came to KwaMashu, but when her pimp Amos came looking for her, it took us all by surprise. We were on the edge of our seat with anticipation of what would happen when her father found out.

Nosiphoâ€™s task was simply to seduce the guy who killed his wife and get him to confess so that Mxolisi and Mastermind would be released from prison. Little did we know that the gangsterism runs in the Xulu family – when the guy tried to kill her, she turned into Rambo.

Ayanda might have been raised under the hand of God-fearing family but the fact remains that he has Xulu blood running through his veins. Obviously he wasnâ€™t fond of Pastor Nkosi but killing him came as a shock. Who kills a pastor though?

5. MaNgcobo objects to Ayanda’s wedding before he can say â€œI doâ€

MaNgcobo is obviously a drama queen but the stunt she pulled at Ayandaâ€™s wedding was unbelievable. For someone who is trying to gain Ayandaâ€™s trust, her objecting the wedding was really not the best idea. MaNzuza might have expected MaNgcobo to do something to sabotage the wedding but actually stopping it was too much to ask.

Who knew that GCâ€™s knight was only a few miles away from him? He also couldnâ€™t believe it when he had a secret admirer but Jojo was already there to sweep him off his feet.

Catching up on #Uzalo and I can’t believe this DJ and GC are actually dating now. Lol, can they kiss already ðŸ™„ðŸ™ˆ

People might have expected a different outcome from Mxolisi and Nokuthulaâ€™s affair but when she started getting out of control, it shocked us to see how possessive she can actually get. The fact that she is a married woman with a dangerous husband had Mxolisi trying all he could to escape her clutches and reverse what appeared to be a death wish.

After Gxabhashe filed for divorce, MaNgcobo found herself falling into the arms of the man she once fell in love with, only to find that it was a plot to destroy her and leave her broke. When Zakhele held them hostage over money, MaNgcoboâ€™s only option was to protect her family. A scuffle broke out between her and Zakhele and she shot him.

Nobody had anticipated Mabuzaâ€™s release from jail after several charges against him and the fact that he came back a born again Christian.

10. Confession letter a twist of fate

Just when everyone thought Mxolisiâ€™s shenanigans would never come to light, Nokuthula came into the picture and changed everything. After Nokuthula kidnapped and poisoned Mxolisi he thought he was dying, so he drafted a letter confessing his role inÂ Nkosinathiâ€™s death. Will the letter land in the wrong hands? If it does, what will happen to MaNgcobo and Mxolisi? Will MaNzuza ever forgive him?