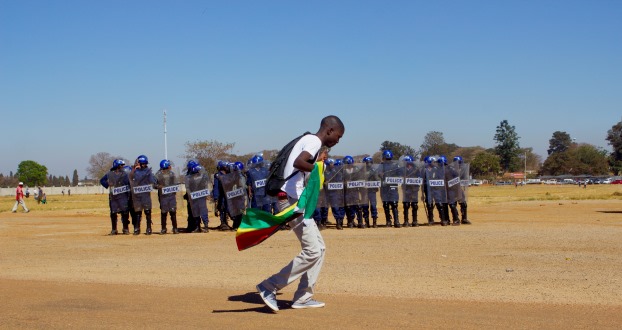 The Zimbabwean state has banned protests, again. For a month, the people cannot picket or petition as police restrict gatherings in the capital, Harare. At first, a two-week ban had been imposed, but after a court challenge, the police order was set aside for seven days. But another prohibition has been declared in the interests of public safety, the police say. But after the last big demo in Harare last month, maybe the state needs some chill too.

That Friday, 26 August, was crazy.

People barricaded the streets and lit towering,Â smoky, fires while others scrawled on city walls telling Mugabe to go – but thatâ€™s only part of the story. Of course, some demonstrators and opportunists were in the mood to cause disorder, but so were the police. Long before the violence began, a commanding officer had shouted the order â€œRovai, rovai!â€ [Beat, beat!] as people gathered in the dusty Freedom Square waiting for the march on electoral reforms to get court clearance. It didnâ€™t take long before the teargas and water cannons went off to disperse those peacefully assembled.

Thatâ€™s what sparked the anger.

For as long as the police strike at people, a violent outburst is bound to be the opposite reaction. It doesnâ€™t matter how many temporary protest injunctions are imposed on Harare, the seeds of wrath have already been planted. Iâ€™m not justifying the violence, but simply pointing out how things might work. The bitterness runs deep and the more state security clamps down, the angrier some people will become.

And the same applies to the anti-government activists and politicians.

This past weekend, an opposition rally was cancelled in Ntabazinduna, a sleepy rural hamlet, in southern Zimbabwe. The police claimed not to have enough manpower to monitor the gathering of a few hundred supporters of Zimbabwe People First. A bit hilarious considering thereâ€™s a police training college in Ntabazinduna and by midday more than a dozen riot police had been deployed to block off the rally venue, a soccer ground used as a pass-through by cows and their herders every so often. Unless a herder suddenly freaked out with his cow whip, nothing was going to happen to make the officers use their cans of teargas and batons.

To me, anyway, it just seemed like another attempt to frustrate the opposition. And not just any opposition, but a movement led by an ex-Zanu PF cadre, former vice president Joice Mujuru. I guess now she knows what it feels like to be on the outs after being part of the team and having been considered a frontrunner to succeed President Mugabe.

Much like every other opposition politician and activist feeling the heat in this season of bans, the cat-and-mouse game with police goes back to the courts. In all these legal battles, the urban mood remains one of anger, and even the non-protesting citizens seem increasingly worried about where the country is heading. Except for one man. Shortly, courtesy of the taxpayer, old Bob and his entourage fly off to New York to the UN General Assembly where he might wax lyrical about democracy, sovereignty and Africaâ€™s absence on the Security Council. Even if he might not be wrong, itâ€™s a pot calling the kettle black situation â€˜cause back home, freedoms are limited by his regime and perhaps, one day, things will all come to a head.