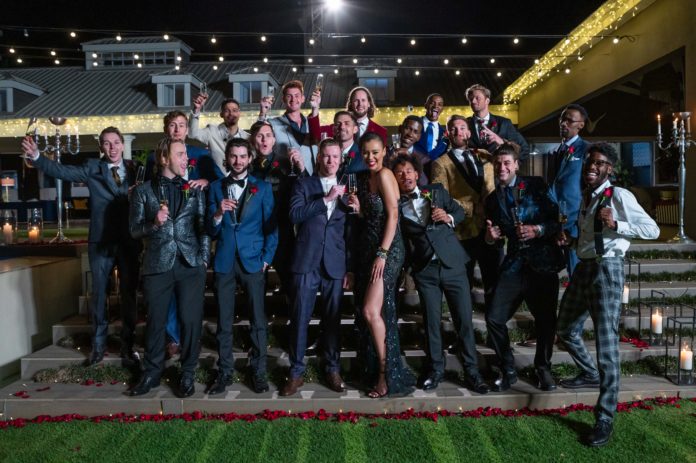 Truth be told, the Bachelorette SA was boring me. Episode 4 was the last one I watched in real time – and everything in it felt too staged. I finally caught up with episodes five and six, and I am here to say things are back on track. We asked for drama and we got it thanks to a bitter remark and some surprise revelations. More on that later: let’s catch up.

Read more: The Bachelorette SA: Everything felt staged in episode 4

This episode started off with a fun group date; a naked model painting session. Fun and overly quirky Dylan was chosen to model for Qiniso and the guys. It was hilarious watching the men feel awkward with a full-frontal naked Dylan. Qiniso seemed distracted but eased up when she had some one-on-one time with Dylan; he got a rose. As we know, if you get a rose on a date, you are safe from elimination that week. Qiniso also had some one-on-one time with Lunga, but again no chemistry. It felt like trying to light a wet matchstick. Dololo chemistry, and even worse they both looked uncomfortable around each other. There was another group date where the guys dressed up in drag. They had to walk down the runway and model for Qiniso and her guest, the comedian Schalk Bezuidenhout. The winning team of three guys had some one-on-one time with Qiniso, Cameron got a “vrystuk” and a rose – leaving Keelan and Kganya in the dust.

With Cameron and Dylan safe from elimination they decided to hang out in the pool. Yes, at the formal cocktail party. It was more to piss the other guys off, but hey, we need this drama. The cocktail party seemed to drag more for Lunga, who could have made one last move, but didn’t. He didn’t get a rose, and exited gracefully. Kyran, who also did not get a rose, brought the raw emotion we have been craving. He walked up to Qiniso and accepted he was leaving: but not before uttering “check your own bullshit”. The episode ended with Qiniso in tears at this departure. Hallelujah and praise be! We finally have some raw emotion. It wasn’t pleasant, but it was a knee-jerk reaction no one can rehearse. It was also very telling of Kyran and really just confirmed his fake “nice guy” persona.

This episode started off with Dylan and Qiniso on a one-on-one date. They drank tea, did some pottery and listened to some music. Perfect and utterly boring. I get that the show is about getting to know each other, but Qiniso still has no bias towards at least one guy and it is irritating me to my core because we all have favourites. The group date consisted of primary school games for the guys. Two teams competed in games like a sack race and bobbing for apples. The winning team had some extra date time with Qiniso. It got awkward swiftly after Ruan commented that Dylan felt punished for not getting a rose. Qiniso broke down in tears again. Vuyani swooped in and saved the day. He watched the sunset with Qiniso and his actions were endearing enough to earn him a rose. We are starting to see how emotionally taxing this is for everyone.

The cocktail party was a hot, paranoid mess. It was dripping in the kind of heat you only experience in a room with no ventilation. The Bachelorette SA host Jason introduced “the wild rose”. The holder of the white rose can “steal” anyone’s date time with Qiniso. Most of the guys descended into paranoia and the mood got tense. Kganya kissed Qiniso and in his rush to make a final impression. Another no chemistry kiss that Qiniso called awkward. Peter was spiralling and it affected everyone around him. Cameron and Dylan were  scrambling and apologising for  their pool shenanigans last week. All the while Keelan was brooding in the background, questioning his very presence on the show. Swazi received the wild rose from Qiniso, tipping things over the edge. Keelan took Qiniso aside for a chat with everyone watching them.The episode didn’t end with the normal rose ceremony, but it set things up for a heated showdown next time.

These last two episodes have been the exact type of content to keep us watching. As much as reality television has staged elements, authentic moments exist. Eliminations on these shows are always fraught with emotion. This was also filmed during the hard lockdown periods of 2020, adding to the suspense.

Read more: The Bachelorette SA – The guys do not know how to play in the show

The Bachelorette South Africa airs every Thursday at 19h30 on M-Net’s channel 101.