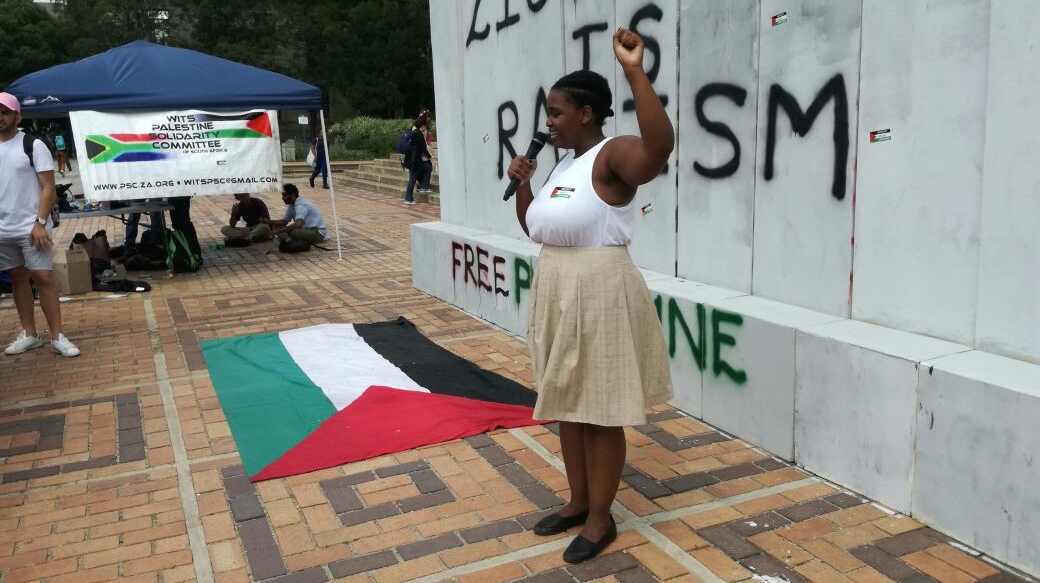 There were scuffles and heated exchanges at the University of the Witwatersrand (Wits) on Monday as Israeli Apartheid Week 2017 began.

Punches were thrown and there was clear tension between students who support Palestine and those who align themselves with Zionism. For the most part, however, the student protest against apartheid Israel was peaceful, with SASCO Wits deputy secretary, Nonkululeko Mntambo, leading the crowd in song in front of a wall constructed to represent the apartheid wall in Jerusalem.

Israeli Apartheid Week is an annual campaign that calls attention to the apartheid-like crimes that the state of Israel has committed and continues to commit against Palestine and its people. During this week – held annually in February and March – a series of events is held in cities and campuses across the globe.

According to Rashaad Yusuf Dadoo, chairperson of the Palestine Solidarity Committee (PSC), an altercation broke out when students from the South African Union of Jewish Students (SAUJS) set up an installation on the space that Wits promised to the PSC. The PSC activists tried to remove the installation, and private security got involved to break up the students. A similar incident happened on the campus last year, when the PSC tried to set up on the space allocated to SAUJS.

Dadoo said that the university has double standards. â€œWhen SAUJS does it theyâ€™ll say, â€˜Letâ€™s wait for three hours, letâ€™s discuss it with management and weâ€™ll come to an amicable solutionâ€™. When we did it [last year], there was an immediate resort to violence. We condemn the universityâ€™s subjective application of rules.â€

Dadoo said SAUJS promotes a pro-Israel and pro-Zionist position and that Zionism is an ideology of domination that has been used to legitimise the expansion of the state of Israel.

Students from SAUJS present at the event declined to comment to The Daily Vox, and we were unable to reach its leadership.

At lunchtime, a group of students gathered in front of the Great Hall to mark the beginning of Israeli Apartheid Week activities on campus.

BA law student, Siphosihle Mbuli, 18, said she is standing in solidarity with Palestine. â€œBesides the political and actual issue, what I believe is whatâ€™s happening over there is unjust and inhumane and shouldnâ€™t even be happening regardless of the issue. Mass killings and the conflict shouldnâ€™t be occurring and there should be negotiations â€¦ Before you understand the issue, you should be on the side of humanity where youâ€™re trying to bring – not even peace – but assurity to another human that their life matters regardless of their religion, their practice or where they live.â€

Wits spokesperson Shirona Patel confirmed that security was asked to intervene on Monday to separate the two groups who had an altercation around 11am. “As a precautionary measure, the university has deployed additional security for the duration of this week,” she told The Daily Vox.

Editor’s note: This story has been updated with additional comment from Shirona Patel and edited for brevity.