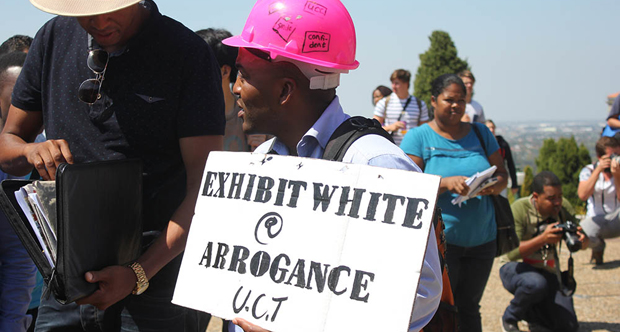 It may have started with poo on a statue, but student Chumani Maxweleâ€™s protest has given rise to a much broader debate about transformation at the University of Cape Town. Novelist THANDO MGQOLOZANA â€“ who just happens to work at UCT â€“ sat down with Theresa Mallinson to talk colonialist symbols, student protest, and the political will to effect institutional change.

I canâ€™t think of any legitimate argument for the retainment of symbolic things like that statue of Cecil John Rhodes. It represents a particular experience to black students. I mean, Rhodes did much worse things than throwing poo. If that is going to make experiences on campus any better, then it must go.

The thing about protests is they are threatening. I absolutely donâ€™t understand when people talk about legal protests. Now UCT was saying, for example, that the students didnâ€™t follow the procedures. I donâ€™t understand that. By all means protest is threatening. It means youâ€™ve subverted the laws. It means anything â€“ absolutely anything can happen â€“ thatâ€™s when the management react in one way or another.

Protest is almost always the last resort. Before all those protests, the student representatives wouldâ€™ve approached management, saying weâ€™ve got this problem. Student representatives say, can we get A, B, and C to make this possible. Management says, we canâ€™t do it, we can only do a little â€“ and offers all sorts of explanations that do not solve the problem the students are presenting. Protest is the last way of registering that same point. I wouldnâ€™t have any confidence in student leadership that uses protests as a first resort.

I do think UCT has bigger problems than the statue. I donâ€™t want to pick one thing. But if you say, hey, this Rhodes statue is a problem, what are the things you are ignoring? If you transform the student profile, what about staff? What about the curriculum that is being taught? So, itâ€™s difficult for me to pick one thing.

It does just not appear to me that UCT is interested in transforming. They will tell you theyâ€™re making attempts, but I donâ€™t think there is will to transform and it makes me wonder: what does this transformation mean?

This is just in terms of numbers â€“ we havenâ€™t spoken about the content. So, the curriculum: what is the content students are being taught? You might have a lot of black students and a lot of black staff, and the curriculum still has a colonial outlook to it, which does not change things, because it doesnâ€™t change the mind. I donâ€™t think at any of those levels UCT is making any progress, nor is it interested in doing so.

Whenever anybody challenges UCT on those terms, there is some kind of rebuttal. It makes me ask: what are you protecting? I canâ€™t help but conclude that it is white privilege. This nonsense about UCT being the top-ranked university in Africa: I donâ€™t care when black students do not have access to it; and, if they do, what theyâ€™re being taught is not a curriculum that resonates with their experiences.

– As told to Theresa Mallinson.
– Story has been edited for clarity and brevity.
– Featured image: Chumani Maxwele, the original UCT poo protester. By: Raâ€™eesa Pather.

Thando Mgqolozana is a novelist and screenwriter. His latest novel, Unimportance, is set in the world of student politics at UWC, where Mgqolozana was deputy president of the SRC. He currently works in the Research Office at UCT.Â