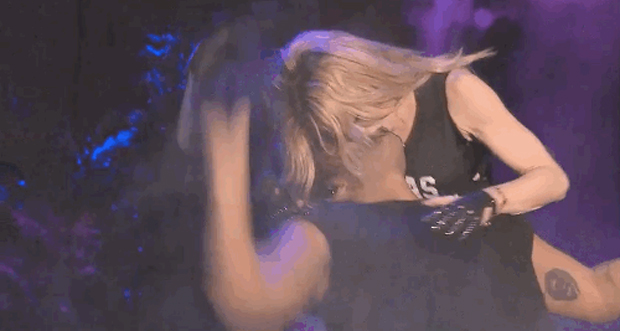 Madonna furiously made out with Canadian hip-hop superstar Drake at the Coachella music festival in Los Angeles on Monday afternoon â€“ with pictures showing Drake recoiling seemingly in disgust. But controversial antics like this are nothing new for Madonna. AAISHA DADI PATEL looks at five other crazy things Madge has done over the last few years.

1. Â Most-censored US TV appearance in history
In 1994, Madonna appeared on the US talk show The Late Show With David Letterman. During her interview she gave Letterman her underwear to smell, lit and smoked a cigar, made several sexual jokes, questioned with Letterman about smoking marijuana â€“ and used expletive-laden language throughout.

2. Made out with Britney Spears and Christina Aguilera
This one was a biggie. Madonna, Christina Aguilera and Britney Spears were all performing onstage at the 2003 Video Music Awards when Madonna planted a smacker on Britney, then turned to her side and made out with Christina, too. Itâ€™s safe to say everyone was shocked, and Britneyâ€™s boyfriend at the time, Justin Timberlake, was definitely not impressed.

3. Cavorting on stage in lingerie â€“ and then licking a gun
In 2012, Madonna appeared on-stage during aÂ performance at Madison Square Gardens in New YorkÂ and proceeded to â€“ among other things â€“ dance suggestively on her own, grope herself and cavort inappropriately with her pianist. To top it all off off, she then licked a gun. Classy, as always.

4. Made out with Miley Cyrus
Okay, so this one didnâ€™t really happen but Madonna once posted a photoshopped image of herself making out with wild-child superstar Miley Cyrus on her Instagram and captioned it â€œDat unaplogeticbitchkiss #rebelhearts.â€ Cyrus, who at 22 could pass for 56-year-old Madonnaâ€™s daughter, is a huge fan and responded by posting a series of photoshopped old-school images of her in Madonnaâ€™s place.

5. 2015 Grammys performance
Madonna arrived at the music awards ceremony in February in a heavily-embellished, black bodysuit with a thong covering her toned behind. She then changed into a red bodysuit, which she paired with heels and fishnet stockings, andÂ danced provocatively on stage with dancers dressed as devils.

Will the self-proclaimed queen of tone it downÂ as she approaches the bigÂ six-zero?Â Only time will tell, but if history is anything to go by weâ€™re guessing the answer to that is no.