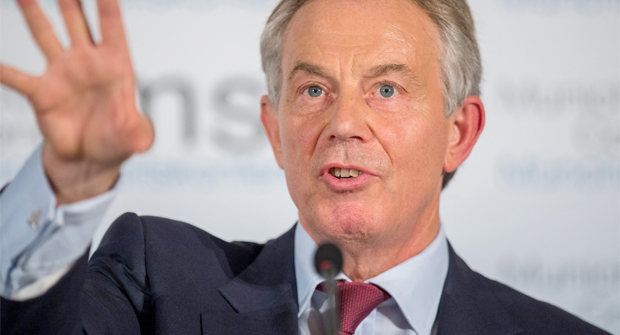 Former UK Prime Minister Tony Blair took to the podium at the Investing in Africa Mining IndabaÂ 2015, where heÂ waxed lyrical about theÂ prosperity of the African continent, and offered some advice to the public and private sectors. But doÂ Blairâ€™s words live up to his actions, asks RAâ€™EESA PATHER? Here are five instances where Blair’s actions did not match his words.

#MiningIndaba Blair: The differentiator between success and failure is quality of govt. Its effectiveness and ability to get things done. GW

If the past is anything to go by, then Blairâ€™s definition of quality government might be dodgy. One of Blairâ€™s good mates is Nursultan Nazarbayev, the dictator â€“ erm, President â€“ of Kazakhstan. Blair has offered advice to his pal in exchange for millions of dollars, which is paid to his private consultancy, Tony Blair Associates. When 14 protestors were killed in Kazakhstan â€“ a country that is notorious for its human-rights violations â€“ Blair told Nazarbayev that the deaths â€œtragic though they were, should not obscure the enormous progressâ€ Kazakhstan had made. Â  In 2012, Blair reportedly made up to $13-million dollars for his advice. Human-rights groups have called Blairâ€™s association with Nazarbayev, who has been in power for about a quarter of a century,Â a â€œdisgraceâ€. But Blair hasnâ€™t been fazed, he has a quality friendship going in Kazakhstan. Not to mention, lots of moola.

Transparency is always a good thing. But Blair might want to take his ownÂ advice on this. In 2013, the Telegraph reportedÂ that Blair had been involved in someÂ â€œopaqueâ€ deals in Africa.Â Emails between Blairâ€™s charity organisation the African Governance Initiative and the US government suggest that he was â€œeager to use his connections withÂ sovereign wealth funds to secure deals in South Sudanâ€.Â Oops.

3. Investing in Rwanda, Ethiopia and Mozambique

Before one begins to speak about Africa, one should understand the complexity of differentÂ African nations. Heads up folks, investing in Rwanda or Ethiopia is not a great idea â€“ from a human-rights perspective, anyway. Given the plight of Andy Tsege â€“ an imprisoned British citizen facing the death penalty for his involvement in a banned Ethiopian opposition party â€“ perhaps Blair should think twice before going to bat for Ethiopia. But wait, thereâ€™s a twist: Ethiopia happens to be one of the nations where Blair has been accused of â€œopaqueâ€ deals. Â

#MiningIndaba Blair: Extremism is a big challenge in Africa. This is probably the single biggest security challenge of our time. GW â€” EWN Reporter (@ewnreporter) February 10, 2015

Yes, extremism is a problem. Nigeria still hasnâ€™t brought back its girls or even managed to find them, and the countryÂ has now postponed its elections for six weeks. But taking Blairâ€™s advice onÂ extremism is a little â€¦ extreme. After all, this is a man who many say should beÂ tried for war crimes for his involvement in the invasion of Iraq.Â Thereâ€™s even an Arrest BlairÂ website up and running, if the idea of a citizenâ€™s arrest tickles your fancy.

5. The cost of having Blair around

and no pictures allowed. Paranoid, much?

During Blairâ€™s speech at the Mining Indaba, photographers who attempted to snap pictures were reportedly shooed away. Although journalists were allowed to live-tweet his speech, they were banned from recording it. Perhaps a good question would be why the Mining Indaba agreed to these terms. Or perhapsÂ the real question is:

– Featured image: Seeing as journalists were instructed not to take photographs of Tony Blair at the Mining Indaba, we grabbed this old one from his visit to Germany last year. By MÃ¼ller/MSCÂ via Wikimedia Commons.