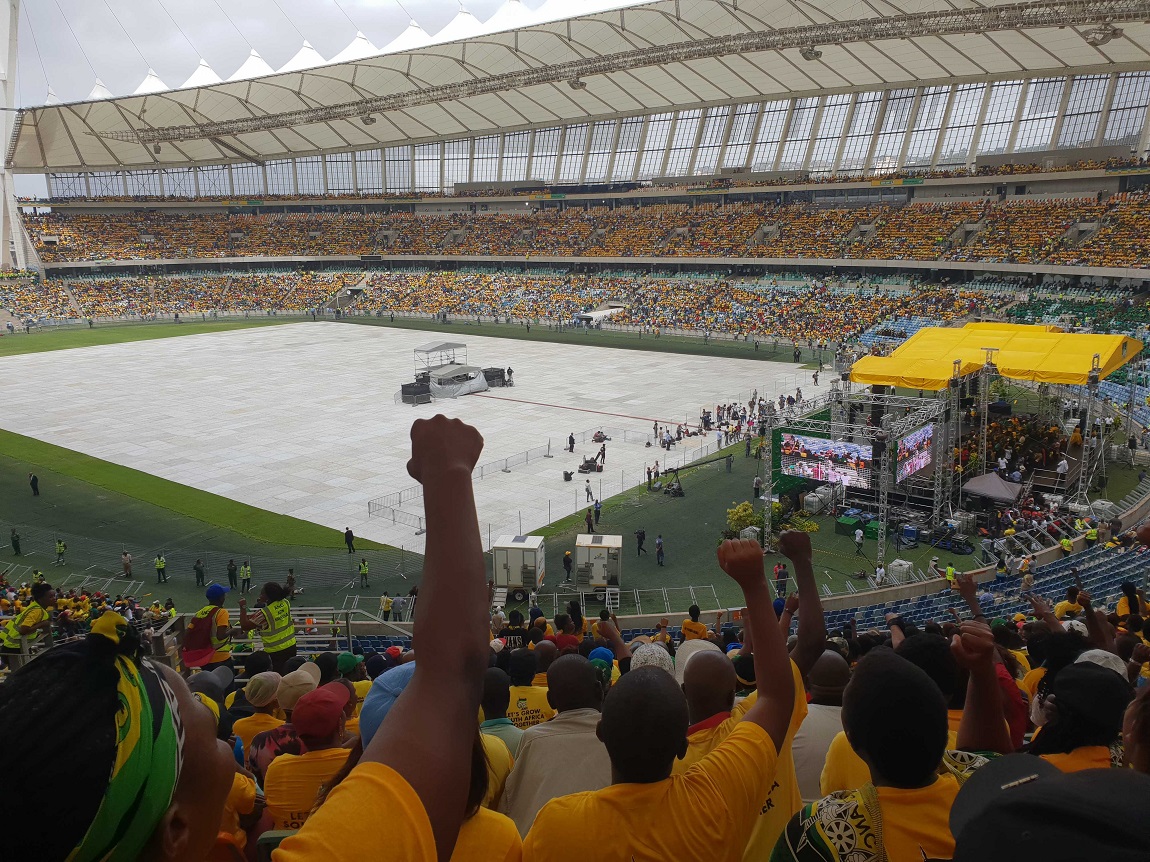 Thousands of people flocked the Moses Mabhida Stadium on Saturday for the African National Congress 107th birthday celebration, and launch of its manifesto for the 2019 national and provincial elections. People from different walks of life packed the stadium to capacity. A few attendees spoke to the Daily Vox and shared what they felt about their political party. As an active ANC member my wish is for the president to unite the party as it is currently divided into three. There is a KZN faction, the Ramaphosa faction and in the North West, Supra Mahumapelo has his own faction as well. The party is under attack. Also, my plea to the president is for him not to focus on the elders but to focus on the youth.

The stadium, which accommodates up to 85,000 people, was tightly packed, with some people leaping over barriers to sit in the private boxes and VIP areas. Eventually the central field was opened up as well to let the crowds in.

The 85,000 capacity stadium is packed. So packed they’re letting people onto the field. pic.twitter.com/EM7n1sMG5b The ANC needs to focus on youth and rural development. I have never heard the president saying anything about the youth. Also, the party needs to pay attention on the way that other parties campaign. The likes of the EFF tell the youth what they want to hear, that’s why these parties have seen youth membership growing. However, we as the ruling party, when we promise something to people, we have to implement it. So it’s not easy. Since ANC took over people started seeing change in their lives. As the youth we have had the chance to see free education, something that people have never seen before the ANC. In our communities there are facilities for young people which encourages young people to engage in positive social activities. I will continue voting for the ANC.

There was an awkward moment as President Cyril Ramaphosa was doing his walkabout in the venue, as sections of the chose that moment to repeatedly chant the name of his predecessor, Jacob Zuma, who had arrived minutes earlier to a rapturous reception.

One wild guess who just walked in.. pic.twitter.com/3knpwKmsGE All I want to see is the president. The ANC has done a lot for me, I have an RDP house and will continue voting ANC. Even my late mother was an active member of the ANC all her life, she is the one who introduced me to it. We are here to celebrate with other ANC members. I have been a member of the ANC for the past 16 years and the party has done so much for the people of South Africa and it continues to do so. To those who haven’t joined, i wish to encourage them to join in numbers. This is the party that has a great membership number, so if you can’t beat them you might as well just join them.