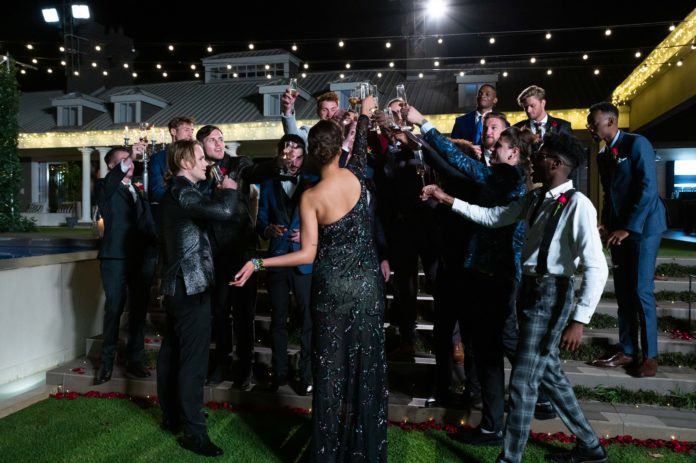 Describing a reality show as contrived is a lot like stating the obvious.We have been aware of scripted scenarios through the years. But as a person who has been watching the Bachelor/ette franchise for a decade now, this past week’s episode felt especially staged. There seems to be a lack of bias, and the episode tanked a bit for me.

Read more: The Bachelorette SA – The guys do not know how to play in the show

The episode started off with a group date called “Qiniso’s Lumberjack challenge”. A few of the guys had to partake in axe throwing, log cutting and log flipping by process of elimination. Peter was the overall winner and had a date with Qiniso, and was rewarded with a no elimination rose and a kiss. He returned to the house and was roasted a bit by the other guys.

The Bachelorette South Africa is basically a speed date chased with grand-pa powders, Score energy drink and audacity. You have to put all your cards on the table and not be coy. This is a fight for Qiniso’s heart. Yet we still have many of the guys moving with trepidation around her – Well all except for Craig. It is as if they count their words, instead of just being open about their intent. I find that they still don’t know what they signed up for. You are quarantined to date someone. It is all you are doing so start doing it. Qiniso chose guys at random in this episode to date, feeling each one out. Now this is not wrong but usually one or two guys would have favour already with the Bachelorette. This didn’t happen this past week. This felt staged as if the producers told her to pick at random. By now one person would feel ignored and moaning about it. There is no bias, and this doesn’t feel organic.

There were many more dates and stolen kisses. Dylan, Henk  Gareth and Aviwe got some soentjies. It felt like a kissing booth in an American high school teen series. Roses were also being dealt out like it’s half off sale; again not organic. Roses on the show are like diamonds; rare. It has to be earned. Competing for roses stimulates the drama. But it seems as if it is too easy to get one. There is a natural flow lacking in the show, and it doesn’t help that Craig- the only guy playing the game- is criticised for it.

Look we are aware Qiniso has to date each guy for the duration of the show. But what is lacking is a clear favourite, and as humans we all have favourites even if we don’t want to admit it. Right now it feels like a rush to give each guy screen time. At the cocktail party Franco had someone read out a date card. So he had a one on one date with Qiniso. It was endearing enough for him to get a rose at the ceremony later. There was a bit of drama after when Qiniso called Craig out for treating her like a commodity. Again this is a fight for her favour and love, so it will be messy.  Vuyani tried to capitalise on Craig being called out and this irritated Qiniso. They were even eavesdropping and reveling in it.

Read more: The Bachelorette SA: Qiniso van Damme is a princess among frogs

Craig and Gregory were given the boot. Now that the perceived villain according to the guys; Craig – is gone – the real one will be revealed. To me that is Keelan. He has a smugness that hopefully will be outed and an arrogance we hope Qiniso picks up on. She wants a kind, caring, strong and straight-forward guy; not a slick sleazy poser who chastises other folks.

I won’t stop watching the Bachelorette, but I don’t want to feel like we the viewers are being duped. Yes this is an induced speed-date but it involves people with actual emotions. We know the formula is to keep competing but things need to at least come across with a natural flow. The lack of bias is telling, and hopefully we don’t see anymore of that for the rest of the season.

The Bachelorette South Africa airs every Thursday at 19h30 on M-net’s channel 101.