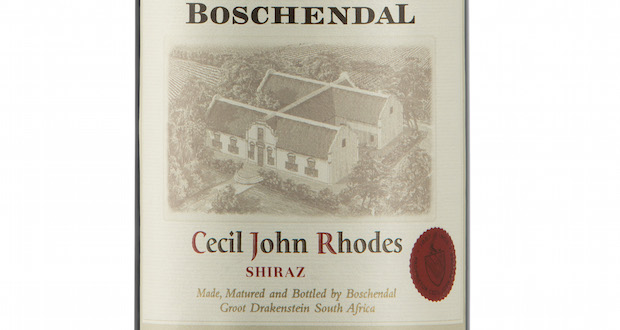 A heady aroma of dark fruit, a hint of white floral spice, and an undercurrent of racism. That’s the top-rated Boschendal Cecil John Reserve Shiraz for you. MANDY DE WAAL explains how Southern Africa’s colonial master managed to white-wash his own past to the point where he is – even today – lauded and revered.

Pour yourself some Boschendal Cecil John Reserve and watch the blood-red liquid fill the glass while the heady aroma of dark fruit hits your nose, to be chased by the slightest hint of white floral spice.

The Platter’s Guide give this red a top rating: “The Boschendal Cecil John Reserve Shiraz is fast gaining recognition as one of South Africa’s best with the 2012 vintage following in the footsteps of the 2010 by securing a 5 Star rating from the Platter’s South African Wine Guide,” the wine critic writes.

The best-selling Platter’s Guide, a ranking that helps people “responsibly enjoy South African wine”, offers detail on the wine’s eponymous namesake: “The Cecil John Reserve range of wines pay tribute to Prime Minister of the Cape Colony and visionary Cecil John Rhodes, a previous owner of the historic Boschendal Estate which dates back to 1685 and is nestled in the picturesque Franschhoek Valley. The Cecil John Reserve Shiraz 2012 is available at select wine retailers and at the cellar door for R235 a bottle.”

It is unlikely that in 2013, when the shiraz grapes for the Cecil John Reserve were being harvested, Boschendal’s winemaker, Bertho van der Westhuizen, even contemplated fallout from naming the wine after the man Platter’s calls a “visionary”. Neither could have anticipated that the statue of Rhodes in front of the University of the Cape Town would unceremoniously have poo flung on it, and would later ingloriously fall.

But fall it did, and in the days and weeks that the rebellion around that statue grew, the shameful life of Cecil John played out in South Africa’s discourse. Rhodes, after whom a small Eastern Cape hamlet is named; whose scholarship affords students the opportunity of studying at Oxford; who spawned De Beers; and who helped create the oxymoron that is the Mandela Rhodes Foundation, which sees South Africa’s beloved world icon’s name wedded with that of a rogue in an institution that aims to better leadership in Africa.

Political analyst and author of The Fall of the ANC: What Next? [with Prince Mashele], Mzukisi Qobo, reminded us that Rhodes was a “sadist, racist, empire builder” whose ambition was to bring “the whole civilised world under British rule – for the making of the Anglo-Saxon race into one empire”.

In his piece in Rand Daily Mail Qobo writes: “His [Rhodes’] initiatives as prime minister included sponsoring the infamous bill colloquially known as the “Every Master Wallop His Nigger Bill”, granting the right to Cape Dutch farmers to flog their black workers. In his words: “We must treat them (natives) as a subject race and be lords over them.” He considered natives as appendages in the production process.

There’s no doubt that Rhodes was an evil man. In its obituary for Rhodes in 1902, The Guardian described his period in Africa as an “unbroken sequence of evil”. Some eighty years later Antony Thomas [who grew up in SA before moving to the UK] would pen a definitive biography on the empire maker called Rhodes: The Race for Africa. Thomas described poring through Rhodes’ letters, thoughts and history during his research for the book”and later for a BBC documentary”as a “descent into evil”.

“I was brought up to revere the man, being from that particular stock of British South Africans for whom Rhodes was incredibly important,” Thomas told the US Public Broadcasting Service (PBS) in an interview. “It was a time when the empire was shaking. They needed Cecil Rhodes. He was a religious icon; everything about him was… He was a holy figure.”

Thomas says Rhodes’ first recorded criminal behaviour was “the sabotaging of water pumps. There he was, still in the diamond mines, which were all cut up among hundreds of prospectors. He knew that this thing would only work if there was a monopoly.” Rhodes realised diamonds would have value if they were rare. By sabotaging and controlling the water pumps, Rhodes controlled the mines.

“That was the beginning. And it was just too easy. He was found out, but he used his charm, and he used the old boy network, and it never came to trial,” says Thomas. “By the time he was out of his twenties, he had got rid of all the competition and he held the world’s diamonds in his hand. And then, of course, he had the money to fund mercenary armies and take Africa,” Thomas adds.

Thomas explains on PBS that while it has been comfortable for the British to blame apartheid “on the Afrikaners”, the very building blocks of apartheid were put in place by Rhodes. “The first thing is that he enacted a law when he was prime minister that forced blacks into reserves, where they couldn’t be self-sufficient. He then imposed a tax on every single hut so that people were forced to sell their labour to the white economy.”

“He was determined that black people should not have the same education as whites. In the early 19th century, South Africa was a non-racial society. Whites and blacks went to the same schools. He put an end to this,” Thomas says. Rhodes also introduced pass laws. “He did all this half a century before the National Party officially established apartheid,” says Thomas.

If Rhodes was evil, how was he reinvented? Author, journalist and broadcaster Matthew Sweet documents this in a piece for the UK Independent called Cecil Rhodes: A Bad Man in Africa. “It was Rhodes’s Alma Mater that did most to brighten his prestige,” says Sweet. “In 1899, Oxford University, an institution with a long and continuing history of accepting money from morally dubious millionaires, agreed to administer a more cuddly and less clandestine version of the ‘Imperial Carbonari” of the 1877 will: the Rhodes Scholars.”

Powerful men like Bill Clinton, CIA director Stansfield Turner, the first secretary general of the Commonwealth, Sir Arnold Smith, and Nato Supreme Commander, Bernard Rogers, would use Rhodes’s money to further themselves. After that came the books and praise films, like the Gaumont-British film company that Sweet says “produced the hagiographic movie, Rhodes of Africa”. After that, this trend continued, with the museums, statues, roads and, more recently, the wedding to our own Nelson Mandela with the Mandela Rhodes Foundation.

Years came and went, Rhodes was entrenched, and his terrible legacy slumbered, but students at UCT persisted – until this past month their political will would be frustrated no more. A student-led rebellion toppled the Rhodes statue at UCT. Not one to forgo opportunity, the EFF swiftly appropriated vandalising statues as a political strategy.

The Rhodes Must Fall movement is about more than just a statue, it speaks to the structural apartheid set in motion by Cecil John, which is still with us. Democracy deracialised South Africa, but Rhodes’ ghost looms large. Take education  – 20,000 out of 25,000 public schools are failed institutions. Our public schooling system is one of the most expensive in the world, yet delivers such poor outcomes that it traps people in cycles of poverty and unemployment. This can be directly attributed back to Rhodes.

Instead, let me ask a question of Clive Venning, the Chairman and CEO of Acquest International that owns Boschendal and offers a “walk in the footsteps of Cecil John Rhodes”. Let me question Tim Hutchinson and Brait Private Equity who own the Boschendal Wine brand through DGB, which produces and distributes the Cecil John Reserve.

Why celebrate a criminal? Why laud the malevolent, evil pioneer of apartheid?

Mandy de Waal is a freelance writer currently based in the Western Cape. Follow her on Twitter.