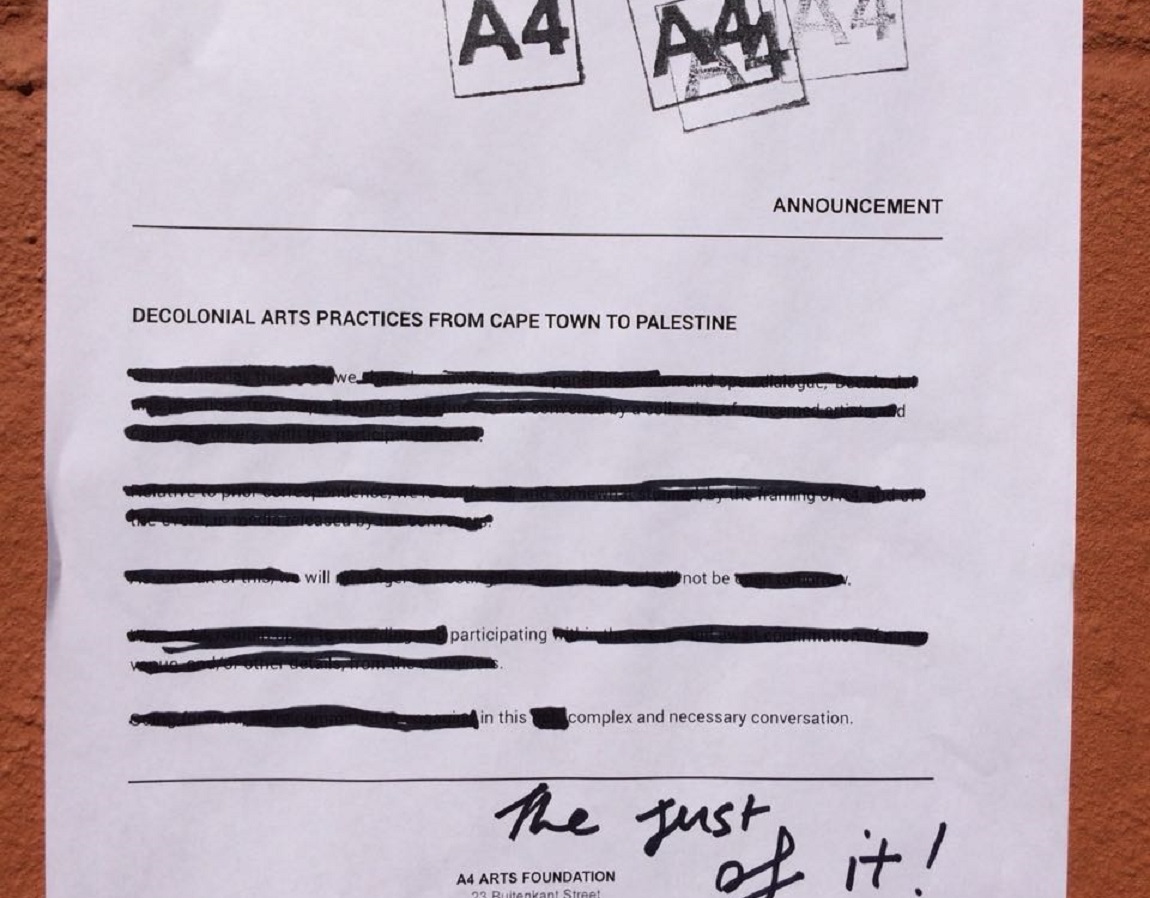 In 2017, the A4 Art Foundation hosted The Third Space Symposium: Decolonising Art Institutions, during which several participating artists became aware that the seed funding for the Foundation came from Wendy Fisher through the Kirsh Family Foundation, a family foundation with deep financial and ideological ties to Israel and its security apparatus. These artists were righteously enraged at having unknowingly been politically compromised – potentially breaking the Palestinian Campaign for the Academic and Cultural Boycott of Israel (PACBI) call to boycott Israel or Israeli-funded institutions.

Following the symposium, a participating artist emailed both the organisers and all the attendees of the event critiquing the silence on these important political issues. Since then, the artist has continued to send that email to other artists who have been invited to participate in projects at the foundation, and even those on the A4 mailing list, with information on A4 Arts Foundation’s Israeli-funding links, so that people are aware of what they are stepping into, and can make an informed decision on whether they wish to collaborate with the space further.

Until recently, A4 Arts Foundation has avoided public discussion and information-sharing about this matter, despite multiple petitions from concerned artists.

In January this year, a group of cultural workers and activists met. We were aware of the political problem posed by A4 Arts Foundation’s Israeli-linked funding, and were further concerned about its normalisation in the Cape Town art scene. This was made particularly stark because of A4’s interest in decolonial art practice and their work with black artists aligned to the decolonial project.

We wanted to intervene in some way. However wanted to make sure that the question of solidarity with Palestine was not understood in isolation from the difficult realities of doing black cultural work in the racist city of Cape Town. The group decided, as a first point of call, to speak to individuals who were working at A4 to get a sense of what the internal dynamics and politics were, to speak to people who had collaborated with A4 Arts Foundation already, and to gather more information on A4 Arts Foundation, Wendy Fisher, the Kirsh Family Foundation, and the Israeli propaganda strategy.

About a month of back-and-forth between A4 Arts Foundation and The cc’d collective ensued, culminating in the agreed-upon plan for a public dialogue on Saturday 14 April at the A4 Arts Foundation building, where the staff had agreed to account for their funding and their position on Palestine.

It was with disappointment that we were informed on Friday 13 April, on the evening before the first public engagement, that A4 Arts Foundation had pulled out of the event due to the publishing of an article in a national newspaper which raised some of the questions that The cc’d collective hoped to engage in the dialogue. The intention of the article was to inform the public of the event and to put the questions that needed answers squarely on the public agenda.

The cc’d collective and other concerned parties decided to proceed with the planned public engagement with the generous and last-minute space provided by a nearby institution.

Results of the panel discussion and public conversation

Over 100 people attended the meeting on Saturday, despite A4 Arts Foundation having sent an email announcing their withdrawal from the event and the withdrawal of the venue. After the panel discussion, including the reading out of a statement from the director of A4, and collective engagement as a wider concerned community of artists, activists and cultural workers the following decision was taken to boycott A4 Arts Foundation until further notice pending the following conditions:

In the interim, the following actions will be taken by those present at the gathering:

The cc’d collective urges the South African art community and all invested parties, whether identifying as part of the arts community or otherwise, to join us in this boycott of A4 Arts Foundation space until the above demands have been met. We further commit to planning a follow up event where we can discuss the material means of solidarity to be employed with Palestine and to envision practical measures to make manifest this solidarity in the creative community.

The cc’d collective is a group of cultural workers – educators, artists, and activists – who came together to think and act towards a radical creative project. The collective formed through a shared understanding of the urgency in addressing issues of racism in the local art scene as well as questions of funding in available art spaces. In looking for alternatives to the status quo, we are invested in experimenting towards cultural practice that works against and undoes the fault lines of power in our society, and in solidarity with struggles against oppression elsewhere.