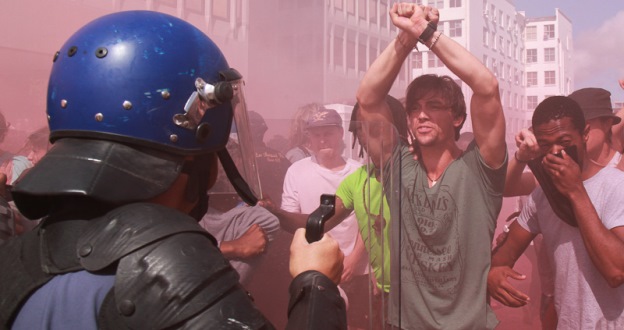 NEROLI PRICE was at Parliament when the #FeesMustFall protests got ugly. She tells us how sheâ€™s struggled to make sense of her lived experience and place it in historical context.

Most of us encounter history as a chronology: this happened, and then that happened which led to a, b and c. History is rendered through words, timelines, and images. However, the lived experience of history is the everyday, the myriad, the complicated, the messy, and mostly the mundane. It is also profoundly multi-sensory, physical and embodied. Often, it strips you of the clear, retrospective, logical, interpretations that most official written histories are framed by.

In a recent New York Times review of Marlon Jamesâ€™s 2015 Man Booker Prize-winning, A Brief History of Seven Killings, the reviewer notes of the novel, â€œThere is always too much history to keep track of – the daily news is itself an impossible barrage – and so a certain kind of novel has evolved to shape narratives out of such chaos, not to find answers, but to capture the way history feels, how it maims, bewilders, enmeshes us.â€ This impossibility of capturing the chaos of history is what has kept my fingers frozen these past few weeks.

The words of the trauma counsellor echo in my head and I think to myself, â€œHow many others are going through what Iâ€™m going through and much worse?â€

My eyes have been glued to my phone screen these past few weeks, breathing in any news relating to #FeesMustFall, refreshing, refreshing, and refreshing my Twitter newsfeed. Maybe I will be able to find something new if I just keep trying â€“ but what am I looking for?

The constant consumption of social media is compulsive and addictive and yet does not allow my brain to switch off. No sleep for a week, loud noises that make me shudder, an increasing sense of isolation, Parliament as a location of pain not a bastion of democracy anymore. How will my world right itself? Is it even possible?

â€œTry to find some time away from social media and try to connect with other parts of yourself that you have been neglecting over the past week.â€

Another suggestion from the counsellor. I know that sheâ€™s right, in my brain, but this experience is not just about my brain. In fact my brain, usually the most comfortable realm of myself to squirrel away in, has fallen flat in the face of police brutality.

How to extract myself? How to process all these conflicting feelings? What happened at Parliament and the rest of the week was incredibly hopeful, but it also contained many of the most terrifying moments of my life. How do I reconcile this jumble, the colours bleeding into each other as the water whooshes and foams, replacing my own memories with those sound bites, video clips and images on the news. How much do we actually know?

â€œBut you were there! Youâ€™re so lucky!â€ they exclaim, like my absolute terror is a badge of honour, like what happened at Parliament was glamorous – like Rocking the Daisies but with stun grenades, tear gas and rubber bullets.

Nothing about the experience of police brutality was cool. Little of it was aspirational. Those aspects that were have been, at best, glanced over by the mainstream media: the handing out of supplies to protestors; the collaborations between homeless people, students, academics and workers to care for one another and their surrounds; protestors intervening as their fellows were arrested. That is radical love, something we need more of in South Africa and indeed, this world we all live in.

This may seem like senseless rambling, but trying to constrain the everyday experience of history into a neat chronological narrative does not do justice to the embodied experience. Being a part of the #FeesMustFall protests has taught me many things, least of all whose bodies, experiences and institutions still dominate the headlines.

Perhaps what has not been talked about is how impoverished our language of the past is. Write poetry, they say. Make art, sing a song. While these are all productive suggestions, I am in the business of history, a narrative that carries a disproportionate weight for communicating â€œthe truthâ€. The form of that truth, in my widening eyes, needs to be interrogated deeply if our discipline is to mean anything going forward.

Neroli Price is a research master’s student based in the department of historical studies at UCT, where she has been a tutor since 2013.Â