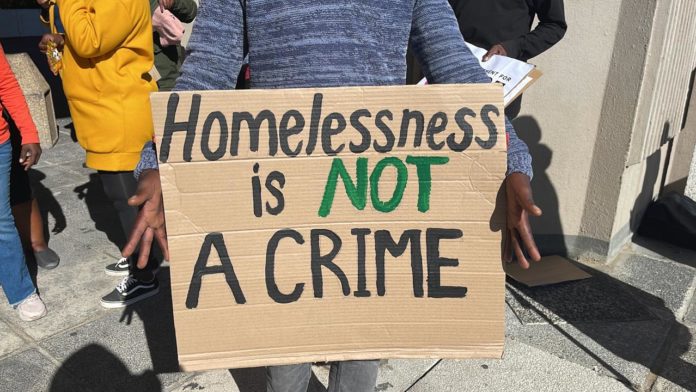 The City of Cape town’s draft Unlawful Occupation by-law passed on September 29. It also updated and passed the Streets, Public Places and Prevention of Noise Nuisances By-law. The City said the laws are crucial, and help protect land and buildings from unlawful occupation.

Several social housing organisations including Ndifuna Ukwazi (NU),Reclaim the City and the Housing Assembly protested outside the Cape Town Civic Centre. The by-laws were passed during the protest.

Karen Hendricks from Reclaim the City said the by-law will displace landless people and those living in informal settlements in Cape Town. It will give the City power to determine what a home is, she said. Buhle Booi from NU said the by-laws would criminalise shack dwellers. Sibusiso Xaba Angela from the Housing Assembly said people often have no other alternative but to occupy land. Xabangela said land occupations are caused by many social factors like unaffordable rent and job losses.

The City’s Mayoral Committee Member for Human Settlements, Malusi Booi, said these by-laws are aligned for the greater good. The city now has a new human settlements strategy and unlawful Occupation Framework.

The by-law closed for public comment on July 31. At the time Ndifuna Ukwazi and Reclaim The City urged the public to reject the bylaw coming into effect.