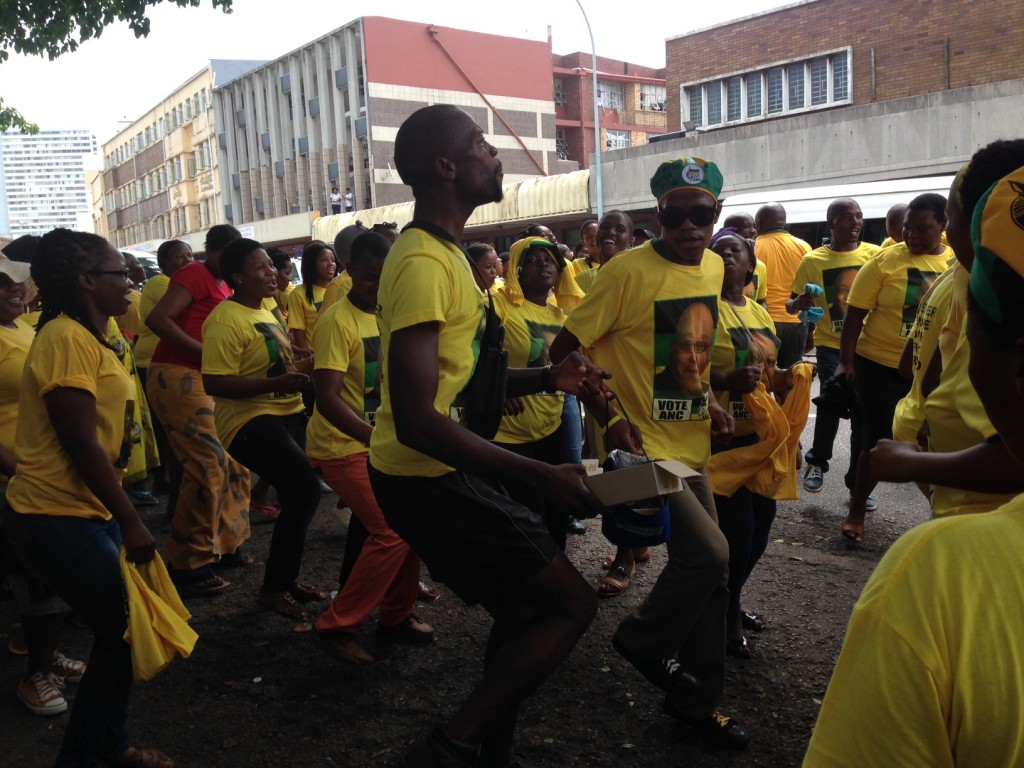 RUMANA AKOOB narrates the myriad colours of an ANC rally in Durban.

I was on my way to Friday prayers when I noticed a crowd gathering outside my university campus. I stopped to ask a policeman what was happening and was told it was an ANC-organised, pro-Zuma rally. Free transportation was provided, free t-shirts were distributed and struggle songs blared through the city as Zuma fans danced for hours in the sun before heading down Pixle Caseme Street in Durban.

An hour before the march began, a queue of people snaked around the park on King Dinu Zulu road. Their destination: A man carrying a large bag handing out yellow t-shirts sporting a smiling Jacob Zuma. I spoke to people who said they were there, â€œJust for the t-shirts.â€ Others were yet to discovere why they were there at all. â€œWe saw the ANC people with a bus so we joined.â€

As I dived into a crowd to take pictures, a gogoâ€™s raging fist of power struck me in the face. It felt like all the power gathered over the 60 years of her existence had been gathering up for that moment where she would raise her fist, connecting neatly with my mouth. Before I knew exactly what had happened, I felt a trickle of blood coming from my lip.

It certainly was not much fun receiving a swollen lip in the name of journalism. And my battle wounds werenâ€™t exactly the ideal accessory as I dressed for a hot date that night. Luckily for me, ice worked wonders, so did lipstick.

There were so many supporters I approached who were unable to efficiently communicate their feelings to me in English. I was sometimes just left in a space where the supporters and I stared at each other, each incomprehensible to the other, as if transposed to a place of grey static.

Gotcha! The DA did not, in fact, attend.