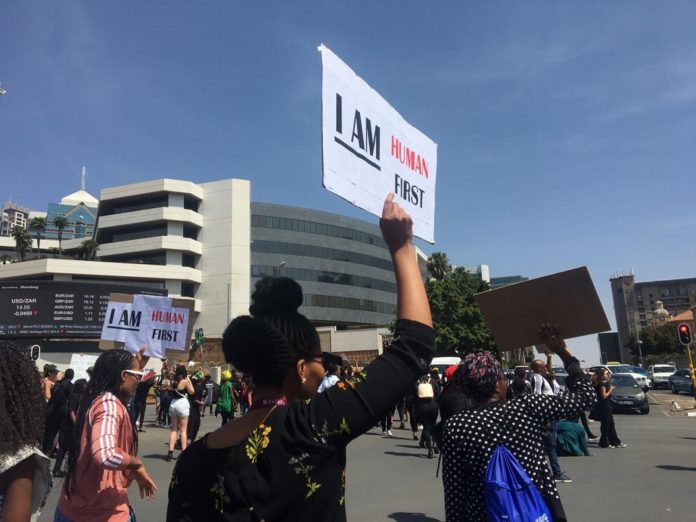 The construction of masculinities, the rule of law and gender-based violence: An enabling environment at the cost of justice for victims and survivors

The origins and constructions of the masculinities and their implications on gender-based violence, specifically the rape culture, is central to understanding South Africa’s high levels of violence against women. At best, the country’s legal fraternity enables — and at worst — perpetuates rape culture in society.

Women in South Africa have been living with the fear and expectation of being raped or violated in some way, at any time, with a justice system and society that will not believe them. Dr Helen Moffett argues that “the pernicious and overtly racially ranked hierarchies endorsed and enforced during the apartheid regime continue to have profound implications for women and their experience of gender-based violence and sexual violence.” In order to clarify this, we explain patriarchy and masculinities, historicise their development in South Africa and explore the shortcomings of the justice system ? despite its legal efforts to institutionalise gender equality.

The manifestation of patriarchal violence

Since South Africa is a patriarchal society, some men who demonstrate non-hegemonic masculinity feel pressured and in fact overcompensate on the other aspects of hegemonic masculinity to prove their manhood. For instance, men who cannot be financial providers overcompensate by being violent physically or sexually (accentuating aspects of physical strength, sexual prowess and heterosexuality).

Violence is also a result of masculinities which normalise or anticipate violence against women as a means of achievement and idolise and encourage men to use violence. Two types of such masculinities are militarised masculinities (which tend to emphasise weapon-use) and hyper-masculinities (more closely linked to calloused sexual attitudes towards women).

The fallacy of the ‘non-violent’ men

Non-violent men are neither victims nor disempowered, but beneficiaries of patriarchy. While, violent men are ensuring that men’s privilege is guaranteed, nonviolent men are quietly enjoying the fruits of that. So, when you are a man in society today, you will always be guilty whether you have raped or not. For there is the choice to revolt against patriarchy, as Luthada puts it, and it remains to be exercised by ‘so called non-violent’ men as a collective.

Rape culture is very South African and rape remains the least convicted crime of assault. This is an indictment against the police service, the prosecutorial authority and the judicial system. They are failing South African women. Some may wonder why the system is dismally failing women. The explanation lies in the patriarchal sentiments that plague these institutions. For one, the police shame women for opening cases of sexual assault. If not, they fail to do their investigative work properly or they subject women to secondary violation by badgering them to provide evidence of the assault. Sometimes they extort money from perpetrators to make cases go away. This is also true about prosecutors who constantly bemoan not having sufficient evidence to prosecute or accept bribes from perpetrators to have dockets disappear. The law is then the only refuge in the system that women have. However, as explained in the following section, the law is not without its problems too.

The feminist concern with rape centres around the politicisation of rape as not simply a matter of criminal law or law of delict as it is currently treated but as an issue of sex and gender inequality.  Susan Brownmiller states:

“The reason for the Law’s everlasting confusion as to what constitutes an act of rape and what constitutes an act of mutual intercourse is underlying cultural assumption that it is the natural masculine role to proceed aggressively towards the stated goal, while the natural feminine role is to ‘resist’ or ‘submit’. And so, to protect male interests, the law seeks to gauge the victim’s behaviour during the offending act in the belief that force, or the threat is not conclusive in and itself.”

In the recent judgment from Eastern High Court which acquitted a Nelson Mandela University student who was convicted of raping a 21-year-old woman who was drunk and unconscious, the court, in this case, demonstrated that the criminal justice system operated oblivious of the fact that rape is an offence that happens often in private and that it is usually unlikely to have corroborating evidence. The theory behind the corroboration requirement stems from the gendered stereotype that women are highly likely to lie about the occurrence of rape, that rape is an easy accusation to make and difficult to defend. The court in the case relied mostly on the inconsistencies and contradictory statements from witnesses about whether or not the complainant knew the accused. The relationship of the victim and the accused is irrelevant in a crime of assault surely. The assault itself should be the pre-occupation of the court.

The court further argued about instrumentality sentiment that the victim in a space like a motor vehicle could show when someone sustained vaginal injuries. Again, the courts continue to ignore an important aspect of rape and solely relying on legal technicalities. Additionally, Professor Pumla Gqola proves that men do not incur actual social costs as a result of their actions. They might be imprisoned, but their relationships with people (friends, family etc.) remained broadly untouched.

It is, therefore, not surprising that sexual violence has been endemic during and after apartheid in South Africa. The institutions that meant to protect women, fail them at every turn. Rape culture remains unchallenged, patriarchy encourages violence and so-called non-violent men are yet to revolt against patriarchy. The physical and sexual violence against women in South Africa is a direct consequence of this patriarchal society. Conversely, violence enforces patriarchy. Thus, creating the gender-based-violence trap seen in the country.

Lukhanyo Velelo is a scholar of Youth and African development. He is submitting his master’s thesis on how youth employment interventions impact Black women in South Africa. He is currently the administrator of the “Studying Development” website at UCT.