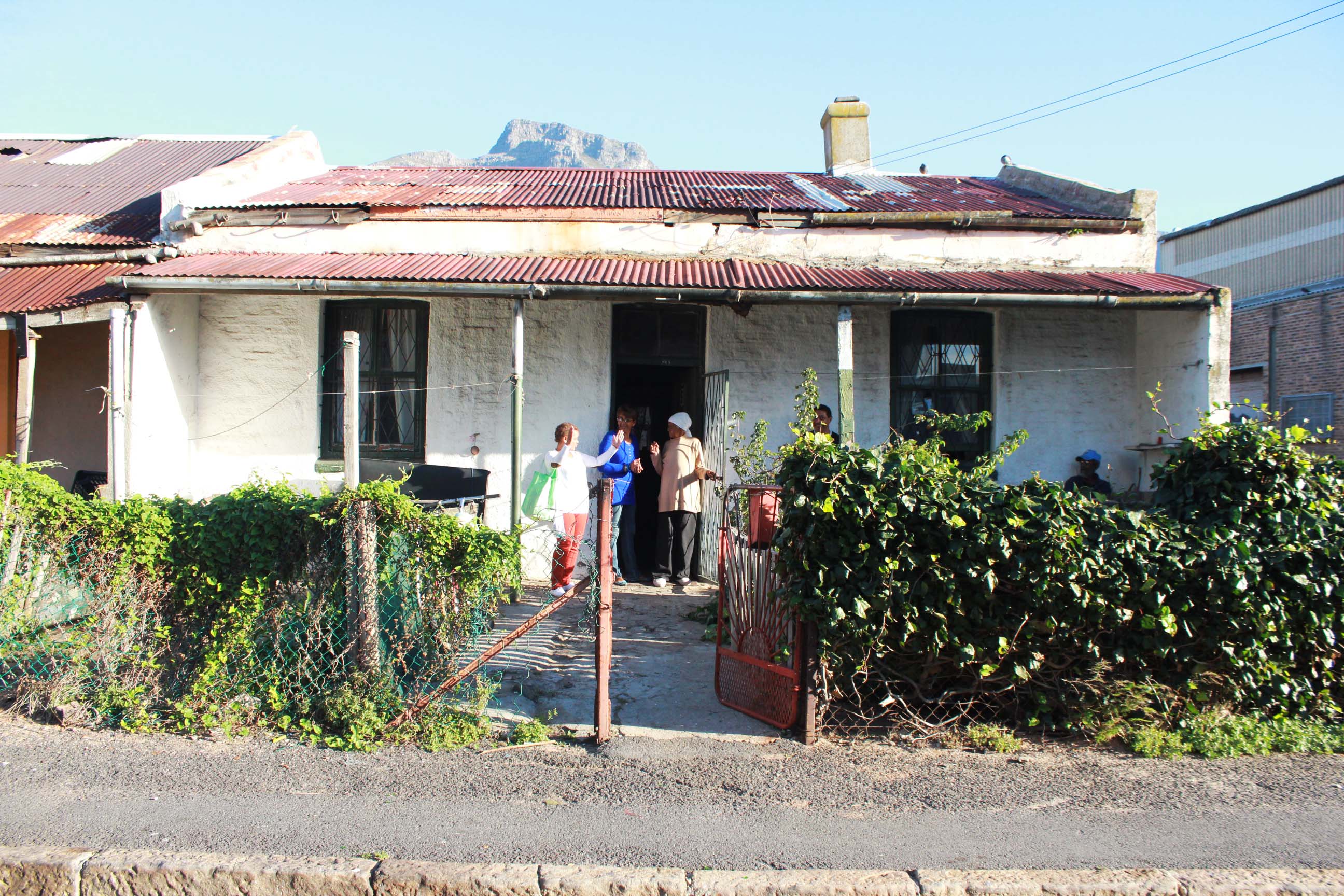 RAâ€™EESA PATHER visited residents in Woodstockâ€™s Page Lange who have been caught between a spate of new development and their own history.

Woodstock, on the outskirts of the Cape Town CBD, has become one of the trendiest parts of the city. The area is a cultural hotspot where dilapidated buildings sit alongside stylish restaurants and art galleries. The Woodstock Exchange has been lauded for its contemporary design motif, while the Old Biscuit Mill has remained one of Cape Townâ€™s best Saturday brunch locations. But all these improvements are said to have come at the cost of the community. 90-year-old Silvia Carelse sits in an armchair that once belonged to her husband. He died last year, shortly after being served an eviction notice from Munir Adams, a lawyer hired by the property owner Waleed Baker. The house has been in Silviaâ€™s family for the past 120 years. At the age of 18, she married her first husband, and gave birth to three of her six children within the rooms of their house. After her first husband died, she was alone for nine years before marrying her second husband. Her last three children were born and raised in the streets of Page Lane.

Like many homes around Woodstock, the property is not owned by Carelse. Instead, the house, along with the rest of the units on Page Lane, was bought by Waleed Baker. â€œAs far as the old ladyâ€™s concerned, I thought she was going to stay with her daughter. I have a place for her, I have a back-up plan, and we can even give her a place on the ground floor,â€ Baker said.

Denise Daley, Silviaâ€™s daughter and caregiver, explains the situation. â€œWhat Iâ€™m doing right now is, Iâ€™m taking her to me in Brooklyn during the week, and she doesnâ€™t want to be there, I need to bring her back here. She cries everyday from the morning to the evening to come back here.â€

According to Baker, the redevelopment of the Page Lane houses will include a parking garage on the ground floor, and two storeys of flats above.

Silviaâ€™s neighbour, Rassiet Losper, has spent over 30 years living in Woodstock, and has no desire to leave. Although he always paid rent timeously before the eviction notice was served, he has also invested his own money into the maintenance of his home, revamping the ceiling and electrical work. Tenants living on this road received their first letter in 2012. Baker said he arranged a meeting with residents to explain his plan, before telling them they could stay.

â€œI realised there was a problem with the heritage office, and I needed to first get the authorisation to take it down. I thought to myself, why would I put the people on the street?,â€ Baker explained. The second eviction letter was delivered by hand in February 2014. It notified residents that they had until March 31 to find new homes.

â€œHe didnâ€™t want to come here to us himself, because he didnâ€™t know how we would feel. After a while he changed his mind and told us we could stay,â€ Silvia says.

Daley explains how her mother reacted. â€œAt first we didnâ€™t want to tell my mother about the second letter. We didnâ€™t want to hurt her again, to let her know she must leave now again. But unfortunately she heard about it and she said â€˜now why are these people wanting to get us out again?â€™”

Baker is the company owner of the Pitstop car workshop franchise. Ten branches exist within the Western Cape, and one of them is situated across the road from the residents in Page Lane.

Some feel that the increased value of property in Woodstock is the only concern of landlords like Baker.

â€œWoodstock is a goldmine. If you look around at all the places, itâ€™s changing now,â€ Daley says.

The process of gentrification allows certain spaces to be redefined as cool, but for some of Woodstockâ€™s original inhabitants, it is also a potential fast-track to poverty and lost heritage. â€œI was born here, my parents lived here and even my fatherâ€™s family before they were married lived here. Woodstock has a lot of history, itâ€™s where history was made. Woodstock will always be my home, we actually fortunate to be here,” he says.

According to the Prevention of Illegal Eviction From and Unlawful Occupation of Land Bill, â€œno one may be evicted from their home, or have their home demolished without an order of the courtâ€.

The homes on Page Lane have existed for over 100 years, giving them access to protection as heritage sites. Although Baker has obtained permission to build, residents still hope that the heritage of their homes can preserve their memories and history from demolition.

â€œLast month we spoke to one of the workers at heritage and he told us they have permission,â€ said Tarryn du Plessis, a tenant who lives with her four children in Page Lane.

â€œI didnâ€™t think heritage would give me the go ahead to demolish. They give me two years to do it, and if I donâ€™t, Iâ€™ve got to reapply. Itâ€™s been a year already, so I need to throw that thing down in a hurry,â€ Baker said.

â€œEvictions are evictions, but we donâ€™t want to go to court here. Now theyâ€™re panicking. Where are they going to get a place for R600 a month?,â€ Baker said.

â€œI donâ€™t have to give them houses, but I donâ€™t want to put people out,â€ Baker said.

Baker claims that he â€œdidnâ€™t know there was a problemâ€ with the residents and maintains that he is willing to â€œwork with themâ€ to negotiate an agreement, and subsidise the tenants for a period until they find new homes. For Silvia,her house remains the only home she has ever known, and it will be her final resting place.

â€œI donâ€™t want to be somewhere else, I want to stay here! They must carry me out here when I die.â€