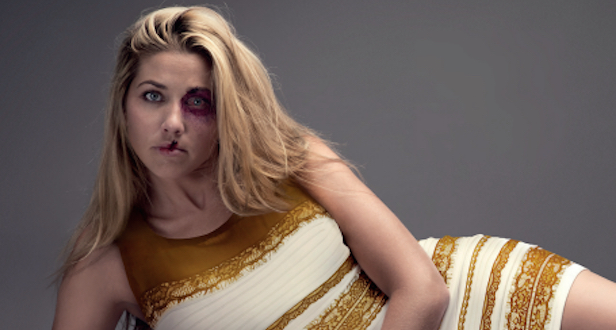 Damn #thedress, it just wonâ€™t go away! But on Friday the meme was hijacked to highlight an important issue, as the South African branch of the Salvation Army released an advert speaking out against domestic violence.

â€œWhy is it so hard to see black and blue? The only illusion is if you think it is her choice. One in sixÂ  women are victims of abuse. Stop abuse against women,â€ the caption read.

When the Salvation Army tweeted the advert, which had been published in South African newspapers on Friday morning, it went viral – and attracted international attentionÂ along the way.

Many individuals and media organisations have praised the campaign.

How ‘the white and gold dress’ became a powerful statement against domestic abuse http://t.co/4JgvZbM3dE pic.twitter.com/buAnLxes32 â€” The Independent (@Independent) March 6, 2015

However, others have questioned the efficacy of such a marketing ploy.

Tweeter Miss Candice may well have a point. On Monday morning, aÂ tweet by user Ushmeister was retweeted more than 2,000 times.Â

Judging by hisÂ Twitter feed, Ushmeister isnâ€™t exactly a shining example of a womenâ€™s-rights activist.Â But, does this even matter? Some people argue that such â€œslacktivistâ€ tweets contribute towards creating awareness. Others counter that attracting attention to a cause by sharing pictures or statuses on social media can cause more harm than good.

Of those who see the post, only small percentage of people will be prompted to take offline action; others may feel that they have contributed towards raising awareness simply by retweeting or sharing it. But are millions of views of the advert meaningful if they donâ€™t effect real-world change?

For an NGO, a successful social-media campaign to highlight an issue is only the first step. Then comes the hard part: converting this attention into action in the real world. How does the Salvation Army plan to leverage the exposure gained by its campaign?Â And is a white model with some fake bruises a fair representation of domestic violence victims and survivors?

Our managing editor Faranaaz Parker will be posing these and other questions to Carin Holmes fromÂ Salvation Army via Google hangout on Wednesday 11 March at noon.Â

Please send in your own questions via the comments section, Facebook, Twitter, email or WhatsAppÂ us on +27 72 899 4461.