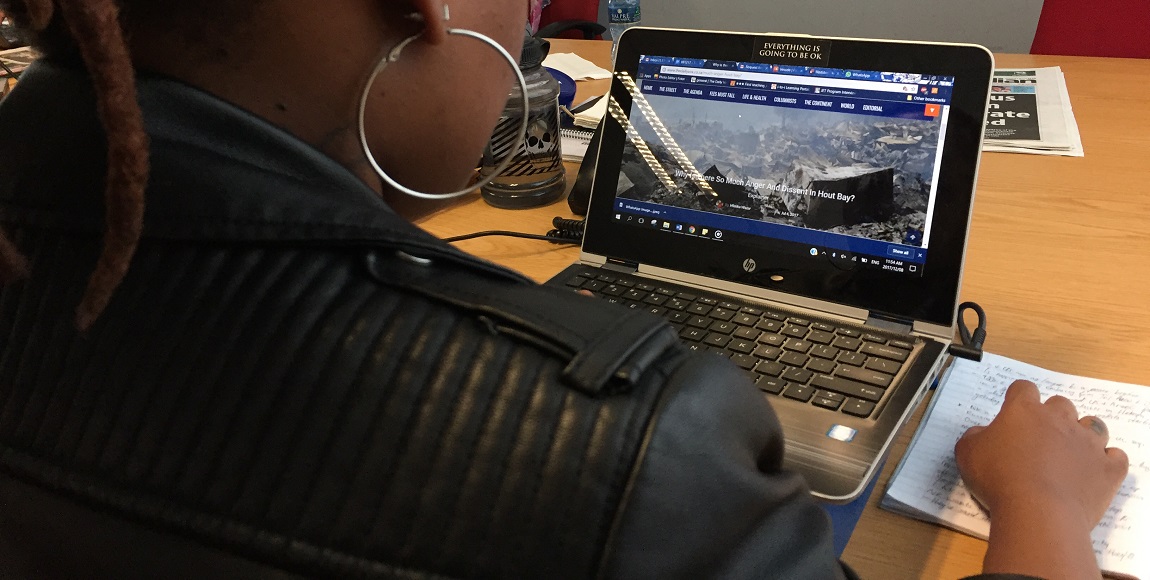 2017 was quite the year in South Africa. We had major service delivery protests across the country, learners exposing the insidious racism in their schools, and the release of the long awaited Fees Commission report.

It’s easy to forget about stories in this frenetic pace of the news cycle so The Daily Vox has followed up on some of a few of our most interesting stories in 2017.

1. Imizamo Yethu resettlement
On 11 March this year, the nation watched in shock as hundreds of shacks in the informal settlement of Imizamo Yethu in Hout Bay were destroyed in a massive fire. The blaze killed three people and displaced 15 000. They were moved into a temporary settlement and promised that they could go back in the next three months. The City of Cape Town said it would begin reblocking the settlement to make it safer for the residents.

By July, the residents were protesting in the streets of Hout Bay. One resident was killed during the protest action. They were frustrated by the inhospitable temporary shelters in the sports field that they had been moved to, the damp cramped conditions that were making them sick, and the lack of basic services. The City had promised them they would live like this only for three months and they had tired of it.

Xanthea Limberg, member of the City’s mayoral committee for informal settlements, water and waste services and energy, told The Daily Vox that the City has completed reblocking Madiba Square. The super-blocking of Imizamo Yethu, Limberg said, hasn’t begun yet. They are currently focussing on completing the temporary relocation areas (TRA) where residents will stay while theyâ€™re super-blocking Imizamo Yethu. “Super-blocking can only start as soon as the affected residents are relocated to the TRAs to enable site clearance, construction and installation of bulk services,” she said. Limberg said they estimate the construction phase will be done in two years.

According to Limberg, the residents living in the emergency displacement area The Daily Vox visited have been moved to the Disa and Depot TRAs. These TRAs will have basic services.

2. Fattis Mansions evictions
In the middle of winter, the Red Ants invaded Fattis Mansion, a derelict apartment building in the Johannesburg CBD. The claim was that the building had been hijacked but it turned out that some of the tenants actually held title deeds to the apartments they lived in. After being left to fend for themselves in the streets with their destroyed belongings, the City of Johannesburg put them in tents in an open field next to Wembley Stadium and allegedly promised them more solid structures by October.

According to one of the Fattis Mansion evictees, the City hasn’t finished building the structures. *Themba Nkosi, a part-time IT student at Boston College, said the former tenants are still living in the tents at Wembley Stadium. “Nothing has happened,” he said of their situation. “In fact they said in October they would’ve got the place to accommodate the people in Wembley Stadium of which nothing has happened.” Nkosi said they’ve been attending court cases since the eviction happened and is frustrated by the City of Johannesburg’s delay tactics. “[E]very time we go to court they have been postponing.”

The evictees have been getting legal assistance from the Socio-Economic Rights Institute of South Africa (Seri). Lindokuhle Mdabe, the attorney helping the evictees with the court cases, says the City was ordered by court to provide better accommodation than tents by 1 October, which deadline they missed, and then by 27 November. “We went to [a] meeting and we were told that the City is now planning to build park homes and it will deliver those park homes by the 27th of November. They haven’t delivered on their promise,” Mdabe said.

Slow to begin the process, Mdabe said the City has begun excavating the site to install these park homes, which are essentially container homes. There is a worry that the City might use this temporary form of accommodation as a permanent solution to the housing shortage. They seem to make an argument [in court] that these park homes can last for more than 20 years. I don’t know where they’re taking that argument,” Mdabe said.

Spokesperson for the City of Johannesburg Luyanda Mfeka told The Daily Vox the delay was due to the fact they had to hold a number of consultative meetings between everyone involved. Mfeka said this process is now complete. They expect to be done with the first batch of 24 park homes which will house 48 families by the end of the year. Another 40 are anticipated to be installed by the end of January 2018.

The City will not endeavour to absorb the evictees of Fattis Mansion into the social housing system. When asked if the City will find them permanent homes, Mfeka said the DA inherited a housing backlog of over 300 000 applicants. “At the inherited pace of delivery, it would take over 100 years to address this backlog,” he said. There is a plan to provide 12 city-owned buildings for developing low cost housing in the City. “These efforts are over and above the conventional housing mechanisms such as the construction of RDP housing,” he said.

3. Books published in indigenous languages
In a move to decolonise the literature space, books written in South Africa’s indigenous languages were a big feature of 2017. In the middle of the year, The Daily Vox spoke to two *womxn who self-published books written in their mother tongues. In July, Charmaine Mrwebi, a former librarian, had self-published a children’s book in Setswana. Mrwebi said the response to Mogodutswane o Setouto (Lizzy the Naughty Lizard) is “quite beautiful” and has been touring the book and her latest one Where Was I all over Bloemfontein.

She visits local creches, reads her books to children, and creates a lively interactive space, which they love. “I’ll go in, read out loud, and the kids are excited,” she said. “Once I’ve done that, they [teachers] want to buy copies for the school, even hold talks and invite parents as well.”

She has sold around 650 copies of her book but because she’s self-published, printing is a major problem. “I’ve been having a challenge of print because I print per sale,” Mrwebi said. She manages to print 10 books with R500.

To ease printing costs, Mrwebi is working on an audiobook version of her current and future stories. She also wants to do workshops with the children she reads to, and get them to write their own stories. “As I read to the kids, I identify certain things, I identify potential books that can even be written by the children,” Mrwebi said.

Earlier this year Thenjiwe Mswane self-published a book of izinganekwan (folk tales) and crosswords in isiZulu called Uyesaba uZulu. When we caught up with her, Mswane said that the book is doing really well. It has even been picked up by a couple of tutors in the Wits School of Languages to teach isiZulu with. “I’ll talk about Zulu as a language and then I will speak about my book. I’ve also started teaching Zulu and using that book as something that I use to speak Zulu,” she said. Word-of-mouth and social media has been her publicising platform which has been working really well. “The sales have been great.” Mswane’s work has also been picked up by a publisher, which she is currently working with to re-edit and re-work Uyesaba uZulu. “My publisher has taken it on because I definitely wouldn’t have been able to do it myself,” she said.

Mswane said the challenges she has been experiencing are mainly because she’s self-published. “It’s really hard to finance and push financing, and make sure that the book is still available,” she said. Distribution is also a challenge because she has to organise mailing it herself. “It’s still the challenges of postage, time, just managing myself.”

She is planning on working with other black womxn to publish Uyesaba uZulu in other indigenous languages. Mswane also wants to create more isiZulu content. But she firstly wants to read more in the language . “I don’t think that there is enough available for me as a Zulu reader, as umZulu, that grows me in the art and the craft of writing isiZulu. I understand the craft around inganekwane, which I focus on. But for me to be able to do more content in isiZulu, I definitely need to invest in reading more Zulu.”

4. Sibongile Mani and NSFAS’s R14 million
We were all shook (and a little bit envious) that payment service provider IntelliMali erroneously deposited R14 million into a Walter Sisulu University (WSU) student’s account in August.  The student, Sibongile Mani, spent R818 000 of the money on luxury weaves, parties, expensive whiskey, and iPhones for all her friends but it all went awry when she shared a picture of a receipt showing her bank balance.

IntelliMali has since paid back the money. In a statement, its CEO Michael Ansell said “Intellimali paid R818 469,20 of its own funds into WSU account to refund the loss.” WSU spokesperson Yonela Tukwayo told The Daily Vox “WSU is not leading the investigation” but rather IntelliMali, who took responsibility for their mistake. The payment provider implemented an independent forensic audit into the matter which is ongoing. IntelliMali spokesperson told The Daily Vox the company had no further comment otherwise. Tukwayo confirmed that Mani is still registered at WSU and wrote the year-end examinations. Mani declined to comment.