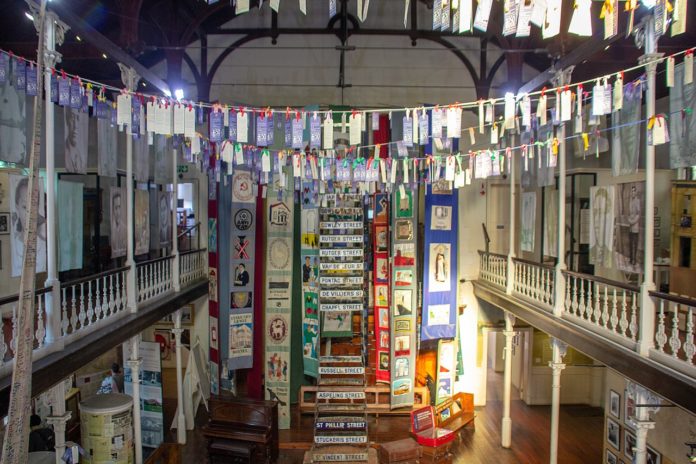 In the heart of the former inner-city residential area and in an old Methodist church in Cape Town, the District Six Museum has been a defense against forgetting since 1994.

“There is very little wholesale acknowledgement of the impact of the Group Areas Act on South Africa. So the fact that if you’re going to Johannesburg, if you’re going to a small town in Mpumalanga, if you go into the Free State – you’ll find a white area, you’ll find the location, you’ll find the coloured township. And we as South Africans, we have taken that as a given. We haven’t interrogated how that’s affected how we engage with each other,” said Chrischené Julius, head of the exhibitions at the museum.

She was speaking about the importance of the museum and the work it does. This important work has been threatened in recent months. With the spread of COVID-19, like many public spaces, the museum was forced to shut its door during the lockdown. This meant a loss of income from visitors, book sales and customised programmes. The museum put out a call in September asking people to help save the museum. There was an outstanding response from people with ties to the museum and those without. Comedy shows, concerts and even online auctions have been held to raise funds for the museum.

During the evictions in the 60s, people were given eviction notices which they called love letters. Julius said when they launched the fundraising campaign they called it a love letter to District Six. It was a way of turning around the past and asking people to help keep the doors of the museum open.

The Save The Six campaign has been put together by young creatives from District Six and across Cape Town. Julius said the campaign made them realise there is a broader relevance to the museum “in the sense that the museum has always spoken about District 6 as a model of what an inclusive society looked like.”

She said the museum isn’t a space for only Coloured history and people. It’s a space that looks at what it means to be Capetonian and South African.

Read more: A heritage of loss: Address Unknown and a second wave of displacement

Julius has been working at the museum for 17 years in different roles. She said she’s always wanted to work at the museum as it was one of the few places where it felt it was the communities’ stories. Julius said many museums view the community as audiences. With the District Six museum, they try to place the community at the centre of all the work they do. Whether it’s speaking to the community and collecting their oral histories and hosting educational workshops for school children and people or all ages.

Julius said there was a period when the community were frustrated and retraumatised by the restitution process to get their land back. The community didn’t even want to engage with the museum. They managed to overcome that and have built a strong community base.

The museum started off as a place where people in 1994 built off the wave of hope around the democratic elections handed in their mementos. It was a memory project working to build an archive of the history of District Six. Julius said it allows people to access the past and come to terms with it.

“How does the archive actually live in the museum? So it doesn’t become something that is sort of shoved behind the story in doors. And so our role as the archive is to provide access to the different departments in terms of the materials that they use for creative workshops,” said Julius

The museum’s origin goes back to the 1980s, said Julius. The area has been demolished and people were removed from their homes. But there remained pockets of communities fighting to keep District Six alive.

‘It was about building this big project that ensures that people’s voices are heard and that it was always that space for people to be able to articulate that I belong to that identity, the district six identity,” said Julius.

The next phase the museum aims to embark on is moving out into the areas where people were removed to. “The city is not accessible to everybody so next year we are moving out into areas like Mitchells Plain, Gugulethu and Bonteheuwel to do community work in those spaces,” said Julius.

There is a need to go to the people and connect with them. The museum has never been about statues and grand memorials. “The museum is not a grand statement,” said Julius. “It’s literally the relationships we build with people over time and how people are always revealing new things and new aspects about their time in District Six or themselves,” she said.

“There’s no way the museum was going to close. I think that we are driven by something that if we have to reimagine what the museum looks – adapt to the post-COVID landscape we will do so. But I think that the work of the museum is important and I don’t think we can’t afford for it to be closed at this point in time,” she said.