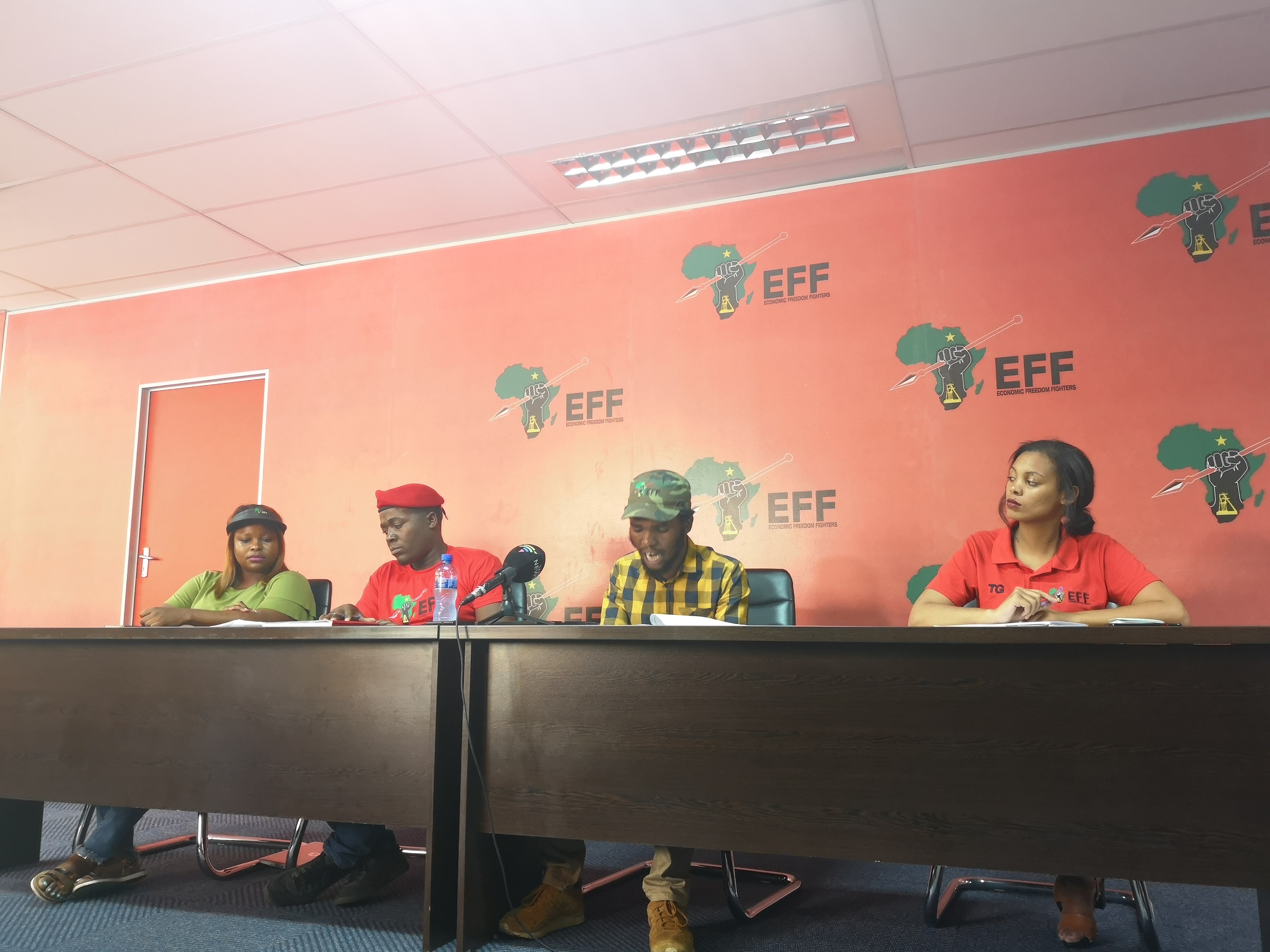 The Economic Freedom Fighters Student Command (EFFSC) launched its #SizofundaNgekani Campaign at a press conference in Braamfontein on January 7. Timeously launched in the 2019 election year, it aims to “redress the issues clouding the future of millions of school leaving youth” – to educate and conscientise the youth.

Important announcement to be made tomorrow by the fastest growing political student formation in the entire African continent.

EFFSC President Peter Keetse outlined the campaign’s programme of action – which calls for free registration for all, free decolonised education with all its allowances including accommodation for all.

“The accommodation issue is the next crisis facing the student society as private accommodation fees are now higher than tuition fees which is completely undermining the free education call,” Keetse said. The campaign demands a firm commitment from the state and universities to provide accommodation for students. He pointed to the abandoned buildings in the Johannesburg CBD which he said are: “waiting for Nigerians and Ghanaians to occupy [them].”

In 2018, the University of Witwatersrand EFFSC led the #AccommodationIsLand march to the offices of Johannesburg mayor Herman Mashaba demanding that he hand over those abandoned buildings for student accommodation.

#AccommodationIsLand: “We Are All Here Because We Are Black And Landless”

Other demands included no financial and academic exclusion, and for no student to be turned away from study because of lack of space. Keetse implored tertiary institutions to be more innovative with their intake, providing more e-classes and allowing more students to get an education. “We must support everyone who qualifies and is hungry to study,” he said.

The campaign is also demanding that all certificates of learning from the department of education or institutions of higher learning to be released, building more tertiary institutions, scrapping of the National Student Financial Aid Scheme (Nsfas), the building of new universities and TVET colleges, and outsourcing of workers amongst other issues.

“The Sizofundangenkani campaign in realisation of the government’s failure to address the youth unemployment crisis for non-graduates and graduates alike calls for an audit of the higher education curriculum to check its quality and capacity to redress the current socioeconomic conditions in the country,” Keetse said.

The burning questions on #FreeEducation government needs to answer

Keetse said the campaign calls for a better model of rolling out funding either centrally from government or at a campus level. “Students are still getting messages asking for money and being blacklisted. We can’t be charged because we want to accumulate knowledge,” he said.

With the campaign, there is a call for a recognition of TVET colleges and building up the infrastructure and for the reopening of nursing and teachers college with the SC shining a light on what they called a shortage of teachers and nurses.

Regarding the number of suicides reported at universities, the EFFSC is demanding that each campus has a clinic with psychological assistance equipped to deal with students’ mental health.

It also calls for those who are not registered for tertiary educations to be able to walk in and physically register at the institutions. With regards to the walk-ins the EFFSC said all learners who did not apply on time or were affected by the late opening should be given the chance to walk in and register at any institution of their choice.

Keetse said while the EFFSC is by no means discouraging students from applying online, there must be provision made to support those who are disadvantaged and have little choice but to register for university physically.

Careful where you try to walk in, some universities have no spaces available

In 2018, all universities disallowed the walk-in of students after representative association of the 26 public universities in South Africa Universities South Africa (Usaf) said there would be no walk-ins to accommodate prospective students. The organisation announced that only students who had submitted their details would be allowed to apply for the academic year.

In 2012 a woman died and 17 were injured at the University of Johannesburg following a stampede during registration.

Keetse said there is no worry about casualties during walk-ins. “It’s all about the cooperation and working together with SRC on the ground and making sure there is security to make sure there is no pushing,” he said. Keetse said communication and data costs poses a problem for students who cannot apply online from rural areas which is why walk-ins are necessary.

During the press conference, Keetse revealed that the EFFSC has written to the higher education ministry asking them to release a communique that registration must be free for all in all institutions. “It is a another form of academic exclusion, – and it is a problematic thing that needs to be dealt with,” Keetse said, adding that they have given the department until January 9 to reply. They have promised maximum anarchy if their demands are not met.

Keetse encouraged young people to go out and register to vote during the party’s voter registration weekend on January 26 and 27. Saying that the older generation had failed young people, Keetse said: “Speak and revolt to the ballot.”

The EFFSC presser was strategically held at the party’s headquarters which gave the impression that the youth’s most pressing issues are of national concern and that the EFF as a whole is willing to give its youth the platform to lead. The issues raised by the campaign show how attuned the EFF is into the issues that are affecting young people at all levels of the education system and are able to speak to those issues. So far, the EFF is the only party who is willing to prioritise the concerns of the youth.

Whether the EFF can successfully mobilise this section of the voting population to go out to the polls and vote for the party will be an important marker of the success of this and many other of the party’s campaigns.

The national party’s 2019 election manifesto launch will take place on February 2 in Soshanguve.